SIX LITTLE SKIERS ALL IN A ROW 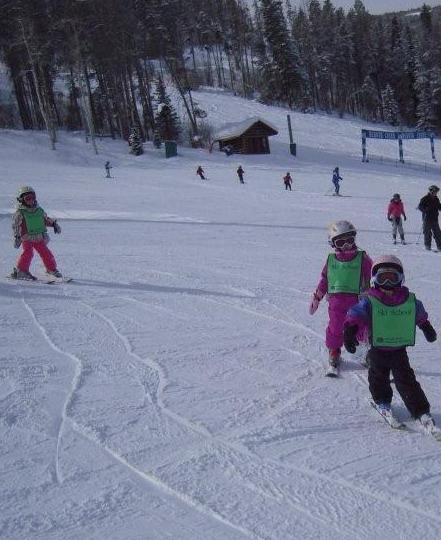 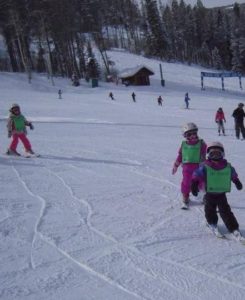 Beaver Creek is a Vail Resort — about 10 minutes from famous Vail in fact — but it is a parallel universe. Even on a busy weekend, it is not crowded. The resort is known for its stellar learning terrain, kids’ school and green easy trails at the top of the mountain, though there is plenty of extreme terrain too.

“That’s the biggest misconception people have about Beaver Creek,” Greig Sheldon, an instructor, told me as we were touring the mountain. “They think Beaver Creek is small but it’s much bigger than people think. “In fact, he adds, take away Vail’s famous back bowls and there is as much terrain to ski here — and a lot less crowded.

In fact, even though it is a busy weekend, we don’t wait on lift lines. And on some runs — especially in the Arrowhead and Bachelor Gulch areas — we practically had the mountain to ourselves.

But the main reason I chose Beaver Creek for this extended family getaway was the children’s ski school. Though one of the largest in ski country — 44,000 children a season and expensive (check rates) — it is considered among the best. We have two little skiers in our group – 4-yea- old Hannah and her 6-year old brother Ethan, as well as a brand new snowboarder Max Weinberg, 12.

There are 600 kids here this weekend, mostly skiers and 65 per cent here in the learning area. Yet none of our kids are in classes with more than six children — a real plus I think. At least 80 per cent of the instructors return and all have some special training working with kids. Max’s instructor, Emmy Gale, for example, is an eighth grade teacher.

That’s not unusual, says Greg Willis, the children’s ski school manager and the dad of two young kids himself. “These are people who are choosing to teach kids, who like kids. They are coaches, teachers, child care workers. They are trained to teach kids without the kids knowing that they are learning-they are just having fun,

Ethan’s instructor, Pancho Gamero, who is from Argentina, tells me the kids named their group the Sharks. Their goal: to chase Pancho (aka BIG FISH) down the mountain. Along the way, they learned how to improve their turns, keep their skis together and some safety lessons (what to do if they got lost — look for someone in a blue uniform or the yellow sign where they’d find a phone!).

The beginner area is a short gondola ride from the base — a lot easier than getting beginners on a chair lift. It has graduated magic carpets (forget the days of hiking up the bunny hill to ski down!), a special snowboarder’s learning area and gentle runs to the base.

It’s also got a brand new RANCH where the 7-14 year olds come in to eat lunch at tables recycled from dead trees) watching ski movies or videos of themselves. Their instructors order their fresh-cooked food on special computer tablets and it looks pretty good — all organic (edamame with the mac and cheese) frozen yoghurt with sprinkles of chocolate chips? Salad with grilled chicken?

The younger kids eat at the base, but the food is brought from The Ranch. They’re ordering more edamame, I’m told, than fries!

Sure this is a pricey area. But sometimes the convenience and atmosphere are worth it, people skiing here with their kids tell me.

They like the intimate feel. The emphasis on customer service (those warm chocolate chip cookies handed out at the end of the ski day,) all of the groomed runs and that even beginners can ski from the top of the mountain. They like the special kids’ features built into the terrain — the teepee, bear caves and ski-through gold mine (where the instructors sprinkle gold nuggets for the kids to find), as well as the new Buckaroo Gondola.

And in this economy, mountain officials say, they are working even harder to deliver first rate customer service. “We want to offer the unexpected,” said Jen Brown. I saw an instructor stop several times, for example, to help a youngster put his ski back on, to help an older skier right himself after a fall and to give directions to a lost mom and child.

There are plenty of kid friendly activities in the village too after skiing — disco skate night, a rail jam. We had terrific pizza at The Blue Moose, where the kids (even the 12 year-old), were happy drawing and playing tic tac toe with the crayons that were provided on the paper tablecloths as we chowed down on first rate pizza and Chianti.

“I like that you can walk everywhere in the village,” one 12 year-old tells me.

One Denver family opines that they think the ski school is so good they wouldn’t send their son anywhere else. “There’s a lot of attention to detail,” said Mike Davis. “Sure it’s expensive, but the value for the kids is great.”

“You can go somewhere cheaper but you’ll spend half the time waiting on lift lines,” said Cindy Phillips, who was here with a large group of 14 people — nine kids! — from Kansas City. Last year, she said, they waited 45 minutes on lift lines. Here there are hardly any.

“It’s a little more expensive,” says Scott Phillips. “But in this economy, you still have to get out and have fun. You can’t just stay home and watch CNN and join the pity party.”

I couldn’t agree more — especially when the snow is fresh, the sun is shining and you’re surrounded by those you love most in the world.