Sneak peek at Disney’s Pandora — the World of Avatar 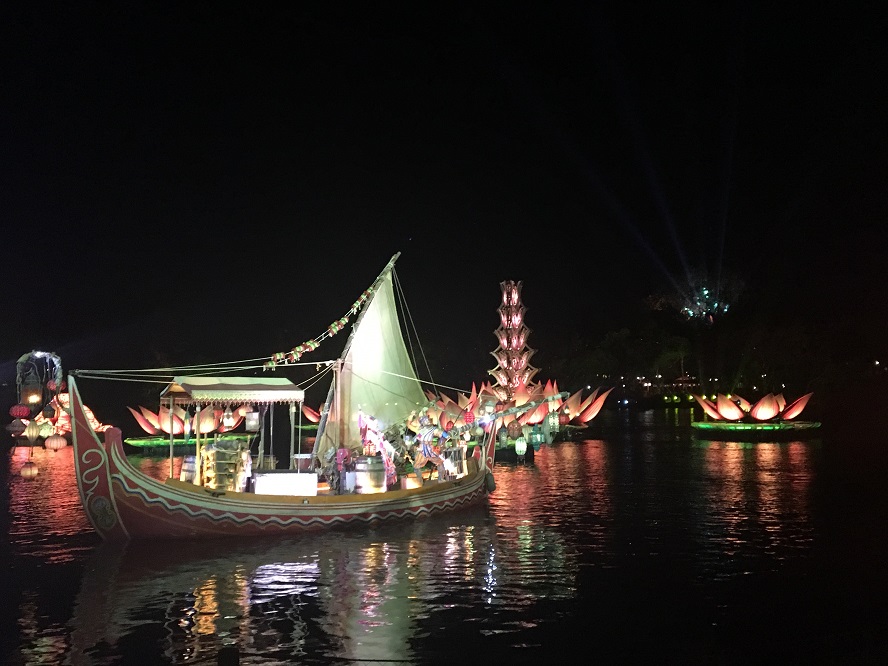 Rivers of Light at Animal Kingdom

That’s Na’vi for “Rise to the Challenge” — in this case, the challenge is riding on the back of a giant Banshee high over floating mountains, plunging through ancient caves, splashing a scary giant sea creature, even encountering the great leonopteryx with his 45-foot wingspan. I can feel the Banshee’s breath. Gulp! And beneath me is a wondrous landscape of lush foliage, waterfalls, bioluminescent plants and strange creatures. Wow!

Welcome to Pandora, a moon more than four light years from earth where gravity is 20 percent less than on our home planet. The giant Na’vi, giant blue people who call this moon home, believe riding and bonding with the Banshee is an important, but dangerous, rite of passage. Humans can only do this through genetic matching that connects us to personal avatars, a hybrid from modified human DNA and Na’vi genetic material.

We have joined an eco-expedition with the Alpha Centauri Expeditions (ACE) tour company as scientists work to reclaim the planet’s natural resources generations after rapacious humans almost destroyed the place.

If this all sounds familiar, it is because Pandora — The World of Avatar, Disney’s newest land (five years in the making) and the largest expansion in Animal Kingdom’s 20-year history, and the first time the park will be open late into the evening, was inspired by James Cameron’s blockbuster movie “Avatar,” the highest-grossing film of all time. The long-delayed announcement of the movie sequels has just been made (the journey continues Dec. 18, 2020, Dec 17, 2021, Dec 20, 2024 and December 19, 2025.), just as Walt Disney World readies its new land for opening May 27.

But Joe Rhode, the Disney creative executive in charge of Pandora, takes great pains to explain that it’s not necessary to have seen the movie to enjoy a visit here, that this Pandora is set generations after the Na’vi and the rapacious humans who came here to mine a valuable mineral have settled their conflicts. In fact, he hopes a visit to Pandora can be as transformative a travel experience as a visit to any faraway land. “The story is about you, about your adventures,” he said.

I took Rhode at his word and didn’t watch the film before joining a small group of media for the first sneak peak of Pandora — The World of Avatar a month before the opening. He was right. I was enthralled by the bioluminescent rain forest and the plants glowing at night, and of course, riding the Banshee on Avatar Flight of Passage, which certainly didn’t feel like a simulator and may be the best attraction I’ve ever experienced. And I did feel as if I were in some exotic place, even the signage is more like a national park in a foreign country than a theme park. 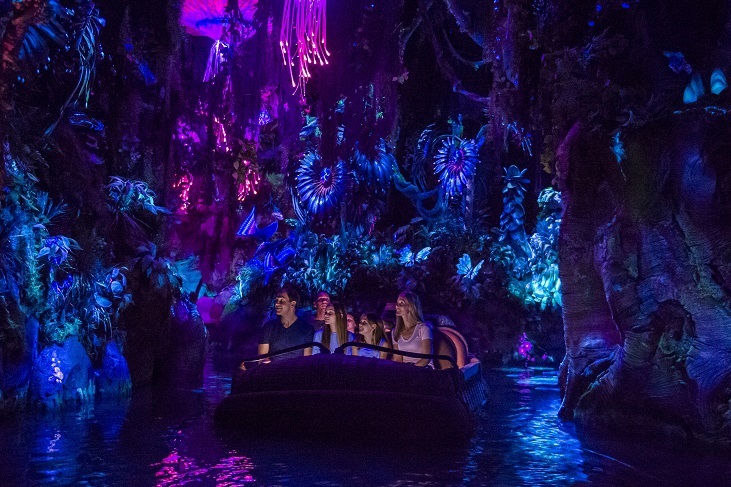 We shouldn’t be surprised at the level of detail — the Imagineer-designed bioluminescent plants next to the real ones; the carvings and cave that is one giant Pictograph, weavings hand done by a village in Indonesia, the animal sounds that change from morning till afternoon till night, the way the Shaman moves her eyelid.

“Everyone will focus on something different,” suggests Jon Landau, the producer of Avatar and Academy Award-winning producer of “Titanic.” That might be feeling the Banshee’s breath, meeting Shaman (a wise woman!) in the bioluminescent rain forest on the Na’vi River Journey or taking in all of the sounds that change through the day and evening. It’s hard to tell what’s real and what’s not.

As is any visit to an exotic land, the food is part of the adventure at Satu’li Canteen, the fast casual restaurant that showcases friendship between humans and the Na’vi, the menu reflecting Pandora’s bounty with whole grains (there is even a green beer) and fresh veggies. Visitors will appreciate choosing their base (think grain, potatoes or green salad) protein (chicken, beef or tofu) and a sauce (chimichurri or creamy herb dressing, for example) — 50 different combinations! There isn’t a French fry in sight and the only burgers are ground beef “pods” encased in a steamed bao bun. This is a game-changer in terms of service as guests can pre-order on their Disney app and will only have to wait a few minutes upon arrival for their order to be put together.

(TIP: Summer is extraordinarily busy in Orlando and Pandora is expected to draw big crowds and long lines. Once you have bought your tickets, book your FastPass to bypass lines as soon as you can — 60 days in advance, if you are staying in a Disney resort and 30 days in advance otherwise. You can also take advantage of the park’s extended hours. This is the first time the Animal Kingdom will be open so late, until 11 p.m., and there will also be “extra magic” hours early in the morning and a night for Disney resort guests.)

In the evening, beyond the plants that glow all around you in Pandora, you’ll like the new “Rivers of Light” show that illustrates the connection of animals to humans with music, live performers, special effects and animal imagery on giant water screens.

Take the kids through the post-sunset African Savannah on Kilimanjaro Safaris, seeing lions when they are most active, as well as hyenas; join a song and dance gathering, watch the famous Tree of Life awaken after dark. There is even a special Evening Safari Experience with dinner ($169) and the chance to experience other popular park attractions like Expedition Everest on the Savanna.

The underlying story on Pandora, and throughout the Animal Kingdom with its 2,000 animals, is to celebrate the intrinsic value and redemptive powers of nature, Dr. Anne Savage, Animal Kingdom’s chief conservation officer, hopes a visit here will inspire families when they go home. “We have to engage people to connect with nature,” she said. “If we have any hope of conserving the world’s species and protecting the planet.”

“These are issues that won’t go away,” said Landau, in Florida for the sneak peek. “We have the opportunities to engage a new generation and open their eyes.”