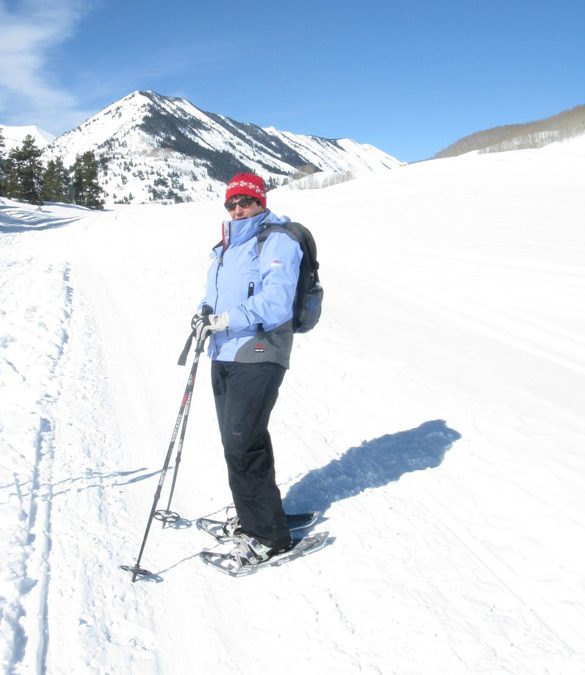 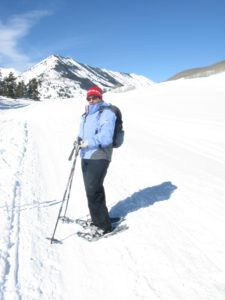 DAY FOUR — There are a lot more ways to play in the snow than just on skis and snowboard. Today I head a few miles from the resort to Gunnison National forest to snowshoe along the Slate River. It’s a perfect blue sky day. The sun is shining…the snow crisp under our snowshoes. There’s hardly anyone else out on the trail — just a few other snow shoers and Nordic skiers with their dogs, and an occasional snow mobiler. We see the tracks where hardy skiers have come to back country ski, hiking up so they can ski down pristine powder.

Did I mention that CB has gotten more than 28 feet of snow — with record snowfalls in December (129 inches) and January (117 inches)?

In summer, I’m told, this spot is terrific for hiking. There’s also a Nordic Center in town (www.cbnordic.org) where you can ice skate or play hockey and rent snowshoes or Nordic skis. There are miles of trails here — as well as moonlight tours. There’s also a free sledding hill. Longtime Crested Butte residents Woody Lindenmyer and Wendy Fisher, who now coach at Crested Butte Academy, say locals here are so jazzed about their town that they love to show it off to visitors. “People here are honest and straight up. They’re sincere.“ says Woody.

In other words, this isn’t a typical ski town — not with its historic town (there’s even a two story outhouse from those days) and its 32 restaurants and shops selling everything from chocolate to art. It’s the kind of place it’s safe to let teens wander on their own and terrain that will challenge even the best skiers. It’s also the kind of place you won’t want to leave.

Fisher notes that people here genuinely love the outdoors — winter as well as summer. “People really embrace you here…it’s a whole different sense of connection, says Fisher, who is a member of the Mt Crested Butte Council.

But like any small town, there are mixed feelings about the development on the mountain — some are glad for the changes, others would rather everything stay the same.

But the development on the mountain clearly is creating buzz — and attracting those who want to see what it’s all about. You might even see a fur coat or two on Elk Avenue. “But it’s not an Aspen crowd,” says Woody.

I think it’ the people as much as the mountain that makes my family want to keep coming back and will draw new fans. It’s people who appreciate The Butte for what it is — charming and funky, and the mountain for what it offers. It’s for the family that wants to connect with those who live and work here — and test their mettle on a mountain where long lift lines — even on the busiest weeks — are unheard of.

It’s also the place where you can happily amuse yourself even if you never go up a chairlift. Ready to go ice fishing? Or how about a massage? “It really is worth getting to,” says Fisher.

The only hard part is leaving.