Snowshoeing into history at the Breckenridge Nordic Center 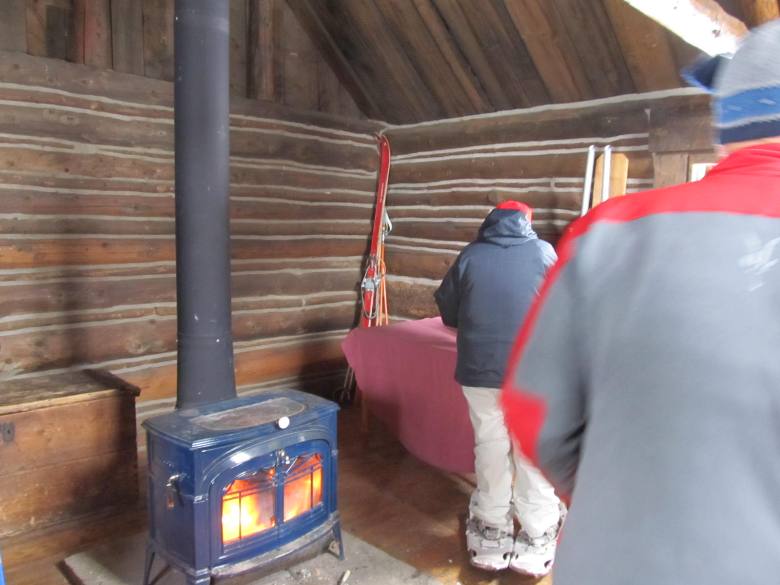 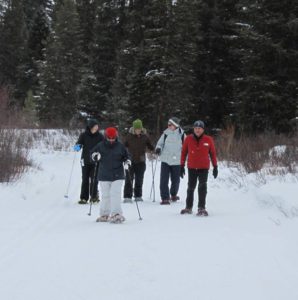 Snowshoeing in the Breckenridge Nordic Center

When you go snowshoeing or cross country skiing at Breckenridge Nordic,  the s’mores at the end of the snowshoe are included.

“This is an up close and personal experience in the Rockies,” says Gene Dayton, who runs the Nordic Center with his son Matt.  “You have time to see the animal tracks and maybe the resident Moose named Ida, Manfred and Abby. You get to enjoy the snow.  And there is no learning curve  and it is something the whole family can do together.”

That’s what we did, with my sister in law who doesn’t ski.

I love that this place is a bargain—just $38 for a trail pass plus rentals for adults, $28 for kids.  You can spend the morning snowshoeing on the expansive groomed trails, come in for soup and switch out for XC equipment at no extra charge.  (You can also get an hour and a quarter lesson for $50… a good deal when you consider that a pass to ski at Breckenridge is over $100 and lessons are a lot more than $50.

My husband and I brought our Tubbs snowshoes from home, glad for the opportunity to use them on groomed trails. (The last time we took them out was after the Northeast blizzard earlier this season.)

We stop at one of the three historic miner cabins that contains a letter that a woman named Josie wrote to her husband, telling him she wouldn’t move to the miner district of Breckenridge “the most fiendish place…the red light district is visible to all…” until he built them a  proper home.

She goes on to say that this small, humble log cabin provided a “rich life” for her family with views of Cucumber Bowl that reportedly looks like a cucumber. 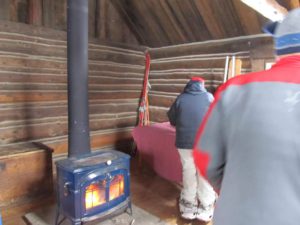 Inside Josie’s hut at the Breckenridge Nordic Center

In just 39 years, some $660 million in today’s dollars worth of gold came out of the mine here.

“When you are snowshoeing it is OK if one member of the family is better,” says Dayton. “You can do it all together.  No problem if you have a baby or toddler.  You can rent a sled for the baby to come along.”

Your pass is also good at two other Nordic areas—Frisco Nordic Ski and Snowshoe Adventure Center and Gold Run Nordic Center that is just outside of Breckenridge.

“Go out and enjoy yourselves with people who have never seen snow,” said Ann Marie Fussell, who works at the center. “It is an incredible spot.”

“A great way to get away from the hustle and bustle of the ski area.”

The historic town of Breckenridge (3500 population) has plenty to do off the mountain.  Did I mention the over 100 restaurants and 200 shops?  I love that Relish has a kids menu that is healthy—not a chicken finger in sight!

We have lunch at local fave Park & Main–love the beet and local Colorado goat cheese sliders, the fava been bruschetta and the Zuchini parmesan sandwich with oven roasted zucchini.  There are grilled cheese sandwiches, home made soup and all kinds of sandwiches–grilled reuben to gyro to chicken shawarma to roast beef chimichurri—and at $8 or $9 for a huge sandwich, the place is a bargain!

You can do an arts workshop at the Fuqua Livery Stable that now anchors the arts district or take a haunted tour with some 12 stops! Stop in at the welcome center that is a free museum and pick up a free Breckenridge History Funbookfor the kids complete with a scavenger hunt to complete as they walk on Main Street.

“This is a real town where people go to school and the grocery store,” said Cindy Hintgen, the manager of the Breckenridge Heritage Alliance.  “Our goal is to show there is a lot more than just the wonderful mountain here.”

Besides the Nordic center, there is dog sledding, snowmobiling, even kite boarding on snow on nearby Lake Dillon, the  chance to take a cooking lesson at the nearby Mountain College, sample olive oil in one of the shops or take an arts workshop with the kids.

Jamie Gripps, dressed in 1890s finest (we especially loved the hat), led a spirited historic tour explaining how this restaurant was once an assayer’s office where Tom’s baby—so named because the prospector named Tom wrapped the 13.7 ounce chunk of gold, the largest ever found here, in a baby blanket on his way to the assayer’s office

The Gold Pan Bar is the oldest bar in CO—since 1861—and it is still a bar.  “Originally it was in a tent,” Gripps said.  “Can you imagine in the winter!” Because women weren’t allowed in bars, they had a bowling alley next door.  We learn that the term “Eureka” came from the Breckenridge mines as did “Panning out.”

At the height of the gold rush here, the town supported three churches, 3 newspapers, a school, 10 hotels, 18 saloons and two red light districts. The picturesque wooden houses lean because there were no foundations.

But by 1918, the first ski jump and was built here by a Norwegian and Breckenridge was on the map as a ski town  The  first rope tow was built a few years later.

“But says Grip, “The gold is still out there!“