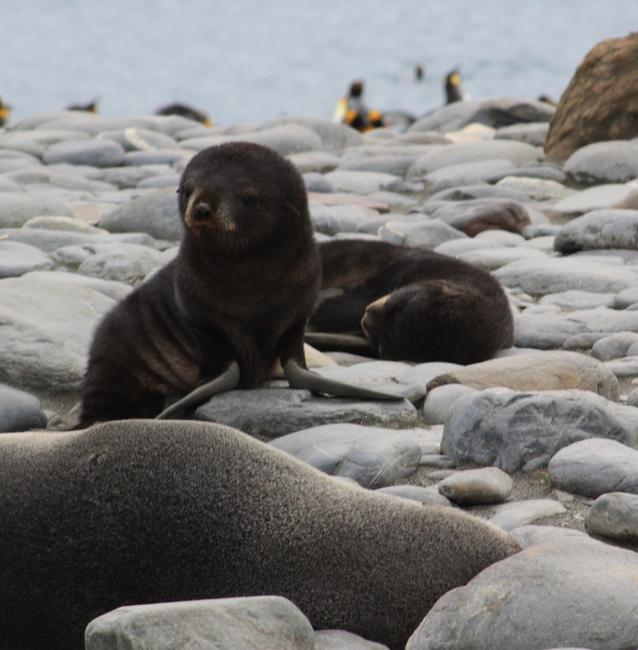 But in this case they’re juvenile King Penguins, also known as “Oakum Boys,” who still have a fluffy coat of downy brown feathers and they’re pecking at their moms to feed them (they were called Oakum Boys because they resembled the young sailors of the early 19th Century who repaired holes in the wooden sailing ships with a pitch and rope mixture called Oakum.)

Merry Christmas! It’s a clear Christmas morning and we’re on Salsbury Plain on the north coast of South Georgia between the Grace a Lucas Glaciers. All around us thousands of King Penguins are squawking, as if to say “what did you bring me for Christmas!” They waddle right up to us. There are fur seals and tiny fur seal pups that are tiny balls of dark brown fur. These seals were hunted to near extinction in the 19th Century but have made a remarkable comeback and number in the millions today.

The penguins are in front of us on the beach, behind us and all the way up a grassy hill. “This is one of the all time great sites of nature,” says Carol Walton, one of the Abercrombie & Kent naturalists guiding us on this cruise. People are alternately looking out of their view finders and just looking around.

It’s one of those I-can’t-believe-I’m-here moments. Only 100 passengers at a time are permitted on the rocky beach and the expedition staff sets up paths so we don’t disturb the animals. They of course have the right of way. And the male fur seals will let you know that with their aggressive behavior.

We’re cautioned from getting too close to the adult bulls—they are huge, nearly 500 pounds and very protective of their pups. Their breeding season just began a month or so again and they have their own established “territories.” We see the cows, smaller than the bulls, with their new pups who look like tiny newborn puppy dogs. They won’t go to sea until next spring but their moms will return to sea every few days to feed them.

They seem to ignore us, as do the penguins, as long as we don’t get too close, keeping our distance about 15 feet.

This is the second largest breeding colony of King Penguins here—as many 60,000 pairs . They don’t have nests but hold their egg on their feet under a fold of skin. We saw some penguins that seemed as if they were sitting on their eggs as well as other younger chicks and the furry Oakum Boys. King Penguins take more than a year to rear their chicks. They typically hatch in mid-January after some 54 days incubation — these Oakum Boys were born last year.

When winter comes here (from May to August) the chicks rely on their fat as food is scarce and parents don’t feed them. They gather into huddles called crèches to keep warm. Feeding begins again the fall with abundant fish and the chicks gain wait, molting into a coat of dark brown feathers and looking larger then their parents.

“The Best Christmas morning ever,” said Sydney Beal, 21, from Minneapolis. She and her sister Kyndall, 18, had told their parents a few years ago that they’d prefer to have experiences rather than holiday gifts. “We could never think of anything we wanted,” she explained. “We prefer doing something than unwrapping a bunch of presents.”

But this morning goes way beyond expectations.

“We won’t even need the pictures to remember this,” said Kyndall. “Just to be surrounded by thousands of penguins as far as we could see!”

“You can have presents any time,” said Conrad, 12. “But you can’t ever see so many penguins like this. “

But then Santa came, arriving by zodiac to the ship. He handed out gifts—knit hats adorned with penguins.