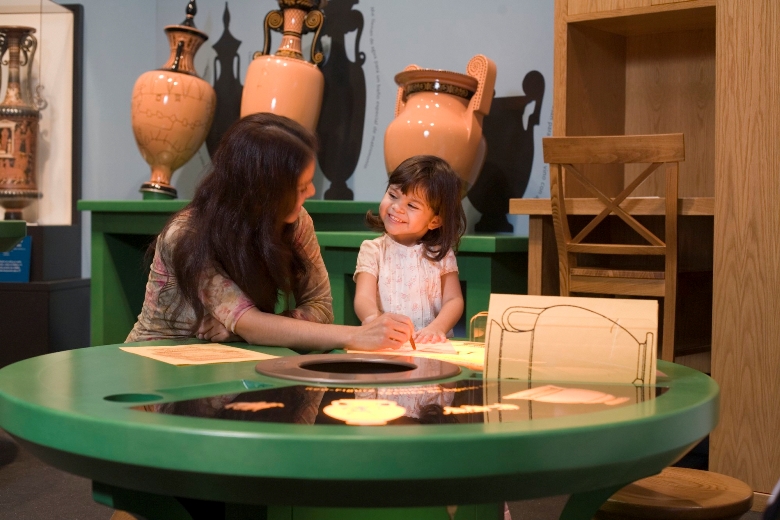 Ready to show off?

If you’ve got any gymnastics moves, now is your chance to strut your stuff — and it won’t cost you a penny. Try the rings or climb the rope — right on the beach in Santa Monica. Maybe you’d rather just swing or kick back in the sand while the kids show off.

On a sunny afternoon recently, kids as well as fit adults were doing that and more on Santa Monica beach’s famous Muscle Beach.

“The idea of having a gymnasium right at the ocean is really cool — the ropes and the swings and bars … you don’t have that at other beaches,” said Elizabeth Gevorkian, 16, who lives nearby in Burbank.

“It is really cool to watch people who know what they are doing and then try it yourself,” said a very happy 13 year old visiting with her brother from Canada.

There is even an area for the kids to climb mini ropes and other equipment. Adults — and kids — were doing yoga, inline-skating, riding bikes (you can rent both right here and bike along the beach on the South Bay Bicycle Trail that runs for 22 miles) and jumping in and out of the surf and squealing with laughter. They were playing beach volleyball on the many free courts and lining up for fresh lemonade and tacos, playing games in the arcade on the pier.

In case you’re wondering, the original Muscle Beach — a few miles away in Venice — is plenty busy too and a great place to people-watch — if you prefer characters. (I saw one guy skateboarding with a black cat on his shoulder.)

“Teens feel like this is sooo cool,” says my friend Jennifer Miner, one of the Vacation Gals, who lives nearby, as we stroll down Ocean Front Walk in Venice. It’s certainly grubbier than neighboring Santa Monica but that contributes to the ambiance and Miner suggests that during the day, local parents like her feel it is perfectly safe to allow their young teens to come on their bikes for a snack, a little shopping at the beachfront stands and maybe a henna tattoo. Did I mention you can get a palm reading right here too?

Venice started as one man’s fantasy to copy Venice, Italy. And when it was first built, it had canals, floating gondolas, bridges and at one point, even camel rides. Today, people — and the famous ocean waves — are the attractions.

“If you want to see surfers who know what they are doing, get up early and come watch as the sun is rising,” suggests Miner. And if you’ve got young surfers in your gang, stop in at the International Surfing Museum in nearby Huntington Beach where you will learn how surfing was imported to Southern California nearly a century ago by legendary Hawaiian surfer Duke Kahanamoku. (Got your board shorts?)

Kids who visit Los Angeles, especially tweens and teens, want to hit the beach and the beach towns are guaranteed to please — no town more so than Santa Monica with its world-famous pier, which has been drawing visitors since it was built in 1908 — the first pleasure pier on the West Coast.

I met families from around the world here, including one family from Australia whose teens wanted to come to the pier so much they took a very expensive cab ride from Hollywood. “We don’t have anything like this at home,” explained 13-year-old Kristin Thiele, here with her family from Brisbane. (If you don’t want to drive, Starline Tours also offers trips to Santa Monica from Los Angeles.)

Ride the solar-powered Ferris wheel — it’s nine stories tall — the twirling cups, the roller coaster, carousel or bumper cars. Maybe you’d rather fish from the end of the pier or snack on a funnel cake or cotton candy. “It’s really fun to eat on the pier,” said 17-year-old Stephanie Simmons who lives in LA and was here with her friends.

When it’s time for a little shopping therapy, head to the Third Street Promenade, a three-block, open-air pedestrian mall with lots of stores, restaurants street performers — musicians, mimes, acrobats, even bubble blowers and psychics — and if you’re lucky, a celebrity or two. Some TV shows are taped right here.

Of course, there’s more here than just fun in the sun — even the chance for a unique cultural experience at the J. Paul Getty Villa just north of Santa Monica in Pacific Palisades high on the Pacific Coast Highway. It’s famous around the world for its collections from ancient Greece and Rome but we like it for its special family guides to the galleries and kid-friendly activities. At the Family Forum, kids can act out a scene from an ancient vase (Do they prefer being an athlete or a monster?) or paint their own masterpiece. Kids can roam around the gardens, too. Another plus: Admission is free, but get tickets in advance.

I’m glad I was able to avoid LA traffic for a night and stay at the recently renovated Loews right here in Santa Monica where it overlooks the beach. The fish at dinner just came off the boat and I can see the gorgeously lit-up Ferris wheel from my room.

Not only is the hotel revamping its kids menus to make them tastier and healthier and initiating a Precocious Plates program so kids can order smaller portions from the adult menu, but they have initiated a Fit for Fun family wellness program that includes culinary tours of the Santa Monica Farmer’s Market with Chef Keith Roberts, organized bike rides and Yoga on Muscle Beach, surfing and stand-up paddle lessons and guided hikes through the Santa Monica Mountains. (Check the progressive dining credit deal — the longer you stay, the more you save — $25 each night up to $175 for a seven-night stay.)

Kristin Thiele looked out at all the people enjoying the Santa Monica Pier and beach and smiled happily. “It has its own character,” she said.

Welcome to Southern California. Got your shades?