SWEARING IN THE NEW JUNIOR RANGERS 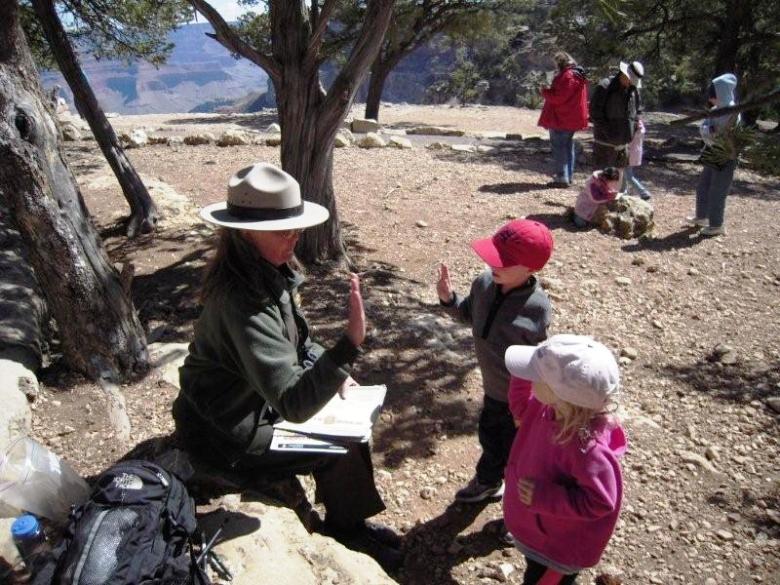 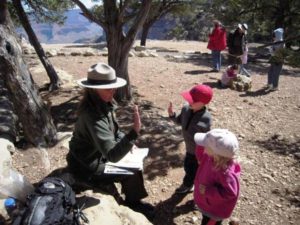 Swearing in two new junior rangers at the Grand Canyon

“This is Grand Canyon National Park, not Jurassic park,” she says, holding up a plastic dinosaur. “This is the closest you’ll get to a dinosaur!”
We’re about to go on a ranger — led fossil hunt and there are thousands of fossils to be found, she tells the crowd that includes at least two dozen kids. But there are no dinosaur bones here — these fossils are a lot older!

Besides, she adds, this is such a special place that we can’t take anything — not a rock, not a fossil, not a flower, nothing. The kids nod seriously. Many including the two I’m with, my cousins Ethan Sitzman, 6, and Hannah Sitzman, 4, are clutching their Junior Ranger workbooks. They hope to finish the activities on this fossil hunt so they can get sworn in as Junior Rangers (www.nps.gov/webrangers).

Ranger Marshall takes us to a spot a short walk from the Bright Angel Lodge along the South Rim. It is a gloriously sunny day and families are here on spring break, they tell me.

Despite the chilly nights, the Dorshels, who are from Colorado, say they don’t mind. “Getting kids outside is the most important thing for me and camping is cheap,” says Katie Dorschel, hunting fossils with her young sons Franklin and Sam.

Ranger Marshall has given the kids pictures and a checklist and obligingly gone around the fossil field and placed blue arrows to make it easier. But even four year old Hannah doesn’t have any trouble. The fossils are everywhere! “Kids really love those checklists!” says Seelye. “They are totally engrossed.”

And it doesn’t seem to matter whether they are four or 11 like Seelye’s grandson Noah Smith, or even older.

“Programs like this and the Junior Ranger program get them interested in what they are seeing,” said Sean Moriarty who was visiting with her daughters Rory and Kyra from Seattle. “It’s exciting for them to learn something and then be able to spot things left and right!”

Ranger Marshall tells the kids the Grand Canyon is like a giant history book about rock and each layer is a chapter. Where we’re standing fossil hunting, she says, is the last chapter — written some 270 million years ago! The kids nod.

“The rangers do a wonderful job,” adds Moriarty. And when they are tired of listening, they can just move around and fossil hunt.

The kids, especially the younger ones, are excited with their “finds.” The parents are equally engrossed. No TVs, no computers, no audio attractions jumping out on cue. Just kids and parents discovering something new together with the spectacular backdrop of the Grand Canyon.

Even 14 year old Tommy Mattix, from Vancouver, WA who cam e reluctantly with his parents and grandparents, couldn’t help but be impressed. “We’re studying geology in school and it was nice seeing what we’ve been studying,” he acknowledged. “And it was more fun than I expected.”

It can also be a cheap getaway, acknowledges Debi Fieri, who had driven eight hours from Oceanside, CA with her family. They were staying at a hotel that offered free breakfast and back-packing lunches and activities—like our fossil hunt. “I grew up going to state parks in Indiana,” she said.” I want to pass on that experience to my kids. There’s a lot to see in the wilderness. You don’t always need a roller coaster.”

At the end of our Fossil Hunt, Ranger Marker checks Ethan and Hannah’s Junior Ranger books to see if they have completed the required activities. They have — even closing their eyes and listening for what they hear in the park. She swears them in as Junior Rangers and they happily pin their badges and stickers on their shirts.

“Do you promise to do your part as a junior ranger and discover all you can about Grand Canyon National Park?” she asks.

“Do you promise to share your discoveries and pledge to protect the Grand Canyon and the other parks and to be a friend of the planet Earth?”

The kids nod solemnly. They clutch their new certificates and we immediately go to buy Junior Ranger patches they can display on their school backpacks.

Now they decide, they are ready to tackle a “real” hike, below the rim, where most of the tourists here don’t go. Since we only have a couple of hours before we board the Grand Canyon Railway back to Williams, and because it is a mile — and a day’s hike — to the bottom, we venture just a little way down the Bright Angel Trail.

The kids are thrilled. They could have gone a lot farther, they tell us, when we say it’s time to turn back.

Next trip here, we promise.