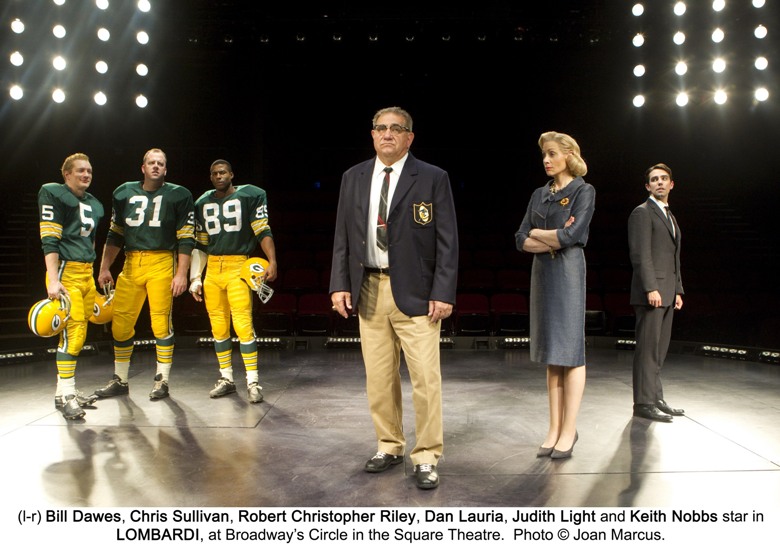 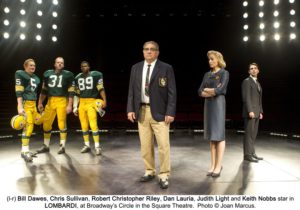 Cast of Lombardi on Broadway

Of course, the Tony Award-winning Broadway hit “Memphis” is about a lot more than that. It’s about the segregated South and those who dared to defy the status quo, all seen through the eyes of a white DJ and an African-American singer. It’s about dreams coming true and being dashed. It’s about leaving home and your comfort zone — and being afraid to do so.

It’s also a great option to introduce tweens and teens to Broadway. I did just that when I arranged for a group of inner-city high-schoolers in our town to take in a performance, under the auspices of A Better Chance (www.abetterchance.org). Skeptical (did they really want to waste a Saturday night?) the teens were theater converts by the end of the evening and went home not only thoroughly entertained but thinking about how different life would have been for their families in the South just 60 or so years ago. And it didn’t matter a bit that they had nosebleed seats in the balcony.

“You can definitely have a dialog afterward,” suggests James Monroe Iglehart, a member of “Memphis’” supporting cast who gave one of my favorite performances. He added that the company loves to look out and see young faces. After all, that is how they were inspired to become actors, singers and dancers and they hope they might inspire the next generation — even jaded teens. Iglehart notes that when he’s talked to high school kids, he suggests theater as a special date-night option. “It makes them feel like an adult,” he explained. “It’s a lot different than a movie or going to the mall.”

The second week in February (Feb. 6 to 10) kids rule Broadway with free tickets (up to age 18, kids can see a Broadway show for free when accompanied by a paying adult). There are pre-theater parties, restaurant discounts, parking discounts, special-edition Kids’ Night Playbills and more. (Visit www.KidsNightonBroadway.com where you can also find theater options around the country.)

“It is so different for kids than TV or the movies, to see people up there on stage in front of you,” Iglehart said, especially when the performers might not be much older than you are. (There are, according to Actors Equity, about 40 young performers currently on Broadway in such shows as “Mary Poppins,” “Billy Elliot,” “The Lion King,” and “The Addams Family.” (Later this season, there will be young performers in the casts of “Priscilla Queen of the Desert” and “The People in the Picture.”)

There are plenty of options this season on Broadway, off-Broadway and in regional theater (www.touringbroadway.com) whether your kids are in grade school (think “Mary Poppins,” “The Lion King” or “The Flying Karamazov Brothers”), tweens (“Wicked,” “Billy Elliot,”) or teens (“Avenue Q,” “Lombardi” for football fans with “talkbacks” with the cast Tuesday and Thursday nights, “Rock of Ages,” (www.rockofagesMusical.com) with special early-to-the-party ticket pricing for its return to Broadway at the end of March. There are many others, of course, including “The Addams Family,” “Jersey Boys,” which is celebrating its fifth anniversary, and Off-Broadway, the Blue Man Group, “Dear Edwina,” a musical about growing up, “Freckleface Strawberry,” based on Julianne Moore’s children’s book about the life of a 7-year-old teased about her red hair and “Imaginocean” about three best friends who are fish (www.ilovenytheater.com) or www.Broadway.com).

There are also great hotel deals in winter in New York (save up to 25 percent on hotels through the end of February http://www.nycgo.com/getmorenyc/hotels), as well as other cities www.hotels.com promises a price-match guarantee). You’re thinking that this winter, you’d rather go to the beach. But if you can’t, I’m saying an escape to the theater — just for a few hours — can be a pretty nice antidote to all the cold and snow. Take the kids (or one of them) with you on your next business trip to New York or another major city where you can see a touring production. Include a night at the theater while you’re on the college touring circuit. Spend a weekend in the city where somehow you won’t mind those mounds of snow as much (hopefully).

You’ll walk out of the theater smiling — and your teens might actually want to talk to you about what they’ve just seen.

Over a million kids and teens attended a Broadway play in the last year, reports The Broadway League, and you don’t have to break the budget to do it, with events like Kids Night on Broadway and discounted tickets. Off-Broadway’s “Stomp,” (www.stomponline.com) for example, has $40 seats for the Sunday night show. Check websites like www.broadwayoffers.com and the Theater Development Fund’s website www.tdf.org to see what discounted tickets (as much as 50 percent off) you might be able to score the day of the performance at the TKTS booths in Times Square, South Street Seaport or downtown Brooklyn.

If your kids are already in love with theater and you are looking for a novel spring break, consider Camp Broadway Dance Track (March 14 to 18 and April 18 to 22, www.campbroadway.com). Young would-be performers will learn essential skills — ballet, tap, jazz and choreography — from experienced professions, including one-on-one coaching by Broadway choreographers, and daily rehearsals with Robbie Roby, the dance captain from “Billy Elliot.” The young campers will also see “Billy Elliot” and have a “talk back” with the cast. Sounds fun, but it’s expensive ($1,395).

If you gulp at the thought of Broadway ticket prices, Iglehart notes that they are no more expensive than a day at Disney World. “And it might impact their entire lives.”

It did for him. After his mom, a high school teacher, took him to see the “The Wiz” in Oakland, Calif., at age 6, he was hooked. “I wanted to play the lion,” he said.

And he did, years later in New York. The applause, he laughed, never gets old.