Taking the Kids — And Myself to a Spa 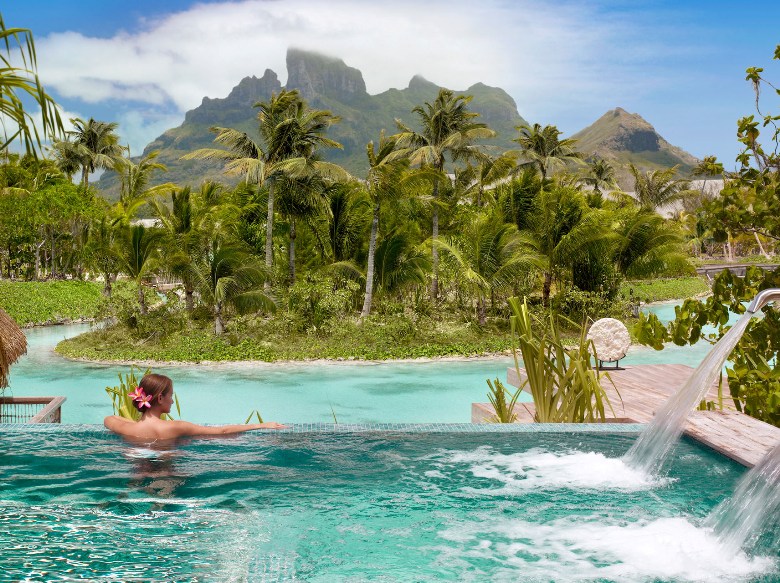 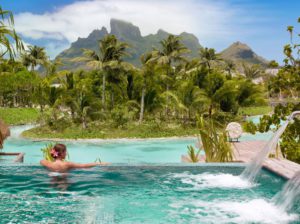 Ahh! I’m face down on a massage table looking through glass at fish swimming in the lagoon, as the Polynesian masseuse caresses me with bags of seaweed and creams made from ground pearls and deep-sea water.

Polynesian music plays softly. Waves lap the shore. Can it get any better than this? We’re at the Thalasso Spa at the InterContinental Bora Bora Resort, which I’m told, is the largest spa in French Polynesia, the first in the world to use water drawn from deep in the Pacific, which they tell us is extremely pure and rich in minerals. It’s just an average mom-and-daughter afternoon together, or once in a lifetime, in this case.
My friend, Pam Roza, her daughter, Orlee, my daughter, Mel, and their two friends, Margaret Bylsma and Lane Washburn — all newly minted high school grads — have taken an afternoon off from sailing on our catamaran from Spa Association, 4 million teens have been to a spa. More than half of the hotel resort spas with memberships in ISA now have teen programs, and new ones that include younger children are opening all the time. An increasing number of resorts have dedicated spaces just for kids and teens — from Scoops Kid Spas at the 10 Great Wolf Lodges around the country (choose your own sherbet scrub) to the Wild Hare Youth Spa at the Hyatt Regency Lost Pines Resort in Texas () with its bright green and purple walls where you can create your own lip gloss. The teen spa area at Loews Coronado Bay Resort (www.loewshotels.com), designed with Pottery Barn PBTeen, offers young spa goers a chance to play video games or watch DVDs while they wait for their special acne facials, sports massages or skincare lessons.

The Homestead in Hot Springs, Va., meanwhile, advertises treatments suitable for several “generations” of your family, while the Tabacon Grand Spa Thermal Resort in Costa Rica has a family spa bungalow that a family can use for an entire day, scheduling alternating treatments with dips in the river.

“Teens we see are experienced spa-goers,” said Pat Liberto, manager at the Cloister Spa at Sea Island, Ga. “The younger children who have older spa-goer siblings want to try something too.”

You’ll find junior spa programs in cities (Trump International Hotel), at ski resorts (The Sundance Resort in Utah), in Florida (Hawks Cay Island Resort) and Hawaii (Grand Hyatt Kauai), in Williamsburg, Va., (The Kingsmill Resort & Spa) where birthday party spa camps are all the rage and even on Royal Caribbean and Carnival cruise ships. And the Solace Spa at Boyne Mountain Resort in Michigan now hosts Family Nights with mini treatments. Admission is just $5 and includes yoga, steam, sauna and mini-treatments for as little as $10.

“At the age of six, it’s not often you get to be a princess for an evening and receive royal treatments,” said Danielle Donovan, from Petoskey, Mich., who took her daughter Libby. “The special mommy/daughter time made Family Spa Night one of a kind!”

“It’s an affordable luxury,” added Carmen Gillett, an attorney from Sarasota, Fla., who takes her 9-year-old daughter, Rosie, to Longboat Key Club and Resort where kids’ treatments might include a junior escape massage (strawberry kiwi body icing?). “She loves it,” Gillett says, adding, it’s a great way to share an experience and have a good time yourself!

While the International Spa Association reports that spa goers are opting for fewer and shorter treatments, youth spa programs continue to flourish — likely because of the reduced fees. For that reason, said Anne Monnier, who took her daughter Hanna to the spa at Loews Lake Las Vegas Resort, “It was well worth the price. It made her feel like royalty. And just having some special mother/daughter time (no husband or son allowed) was special in itself.”

For tweens and teens, spa treatments aren’t just about indulgence either; they can have a lasting impact. “The teen facial made a difference. It also helps teach a young girl about taking care of her skin and about taking pride in her appearance,” said Laura Patterson, who has been taking her daughter, Sara, to the Homestead’s Kid Spa for years.

Carmen Gillett jokes she didn’t even know what a spa was until she was in college. “I’m giving her everything I didn’t have,” she laughs.