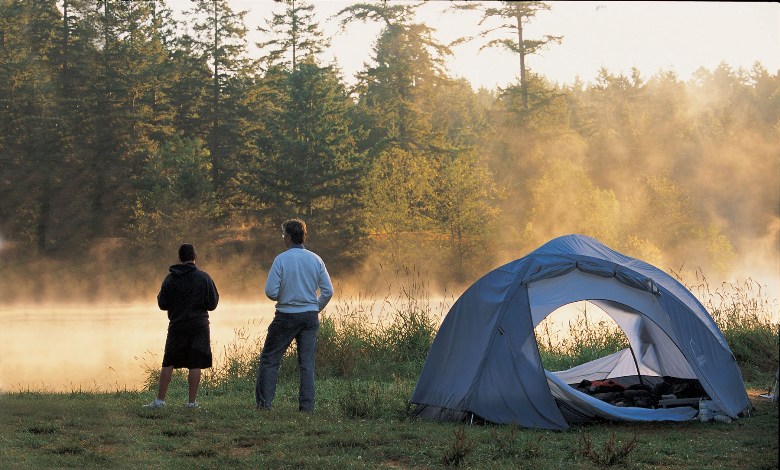 I never figured on the rain.

The idea was to introduce the kids to the backcountry without all the work that backpacking entails. We planned to hike to a backcountry New Hampshire hut operated by the Appalachian Mountain Club (www.outdoors.org) where, rather than lug our tents and food, we’d each get a cot and a meal.

It poured the entire way, of course. We slipped and slid over the rocks on the muddy trail and arrived soaked, but laughing. Years later, my kids still talk about that trip. Two of the three have grown into accomplished backpackers. My older daughter, Reggie, has spent several summers leading teens on wilderness trips. Often families say the things that went wrong on trips are as memorable as what went right and that’s certainly true when you are camping and so completely out of your comfort zone. Californian Shelly Rivoli, mom of three and the author of “Travels with Baby” (www.travelswithbaby.com) remembers the night she spent driving her toddler around a campground because she’d awakened with a nightmare and Rivoli was worried she was disturbing all the other campers in their tents. Exhausted, mom and baby finally fell asleep in the car.

But that didn’t dim Rivoli’s enthusiasm a bit. “We have so many great trips — hunting frogs, marshmallows that are more fun to roast than eat, snuggling in a tent — that we laugh at the tougher moments,” she said. “It is really great family time and the kids will surprise you at how much they find to amuse themselves outdoors.”

Just being in a tent is an adventure for young kids, says Nancy Ritger, an Appalachian Mountain Club naturalist who has camped with her three teens since they were babies. “Definitely get the kids involved in the planning,” she suggests. And it always helps to bring along food they don’t get at home — beef jerky, sugared cereals, Pop-Tarts, or in our family, plenty of Tootsie Roll pops and M&Ms.

It also helps, Ritger adds, to invite along another family with kids around your kids’ ages, if the kids are tweens or teens, bring along a friend. And, for once, leave all the electronics in the car. “It’s hard to unplug,” says Ritger. “We’ve all got so many devices! But you’ll definitely talk to each other more!”

Without the iPods and text messages, kids will make up their own games with rocks and sticks, compose songs on the hiking trail and entertain everyone with a skit around the campfire after dinner.

All that creativity is certainly a good thing. So is having a vacation that isn’t going to break the budget. That may be why this year more families are thinking about heading to the campgrounds. (Probably because you can score a campsite for under $20 a night.) “Camping has become cool,” says Christine Fanning, executive director of the Outdoor Foundation, a not-for-profit organization charged with encouraging young people to get outdoors. She notes that reservations for campsites and sales for camping gear are up. In just one month, REI reported family tent sales were up almost 30 percent from 2008.

To encourage the trend, The National Park Service (www.nps.gov/findapark/feefreeparks.htm), which also offers plenty of campground activities, has announced three free-entrance weekends (June 20 to 21, July 16 to 19 and Aug. 15 to 16).

It doesn’t require a big effort either to get started. Borrow or rent what you need from a company like REI (www.rei.com) or Eastern Mountain Sports (www.ems.com). If sleeping on the ground isn’t your thing, try a pop-up camper. According to Kevin Broom of the Recreation Vehicle Industry Association, rentals start at just $35 a day. Visit Go RVing (www.gorving.com) to find a dealer near you. Another plus: It’s easy to bring along your dog or cat. At some places, including Yosemite and private campgrounds, you can rent a platform tent or rustic cabin so that you don’t have to pitch your own.

There are plenty of options too for those who want the experience the outdoors without all the work. Everyone from the Sierra Club (www.sierraclub.org/outings) to REI (www.rei.com/adventures) to Backroads (www.backroads.com) to the Appalachian Mountain Club offer a variety of well-priced organized camping trips and activities designed for families (even with young children) led by those experienced in introducing kids to the outdoors. For example, one of the weeklong Sierra Club trips costs just $1,500 for a family of four and even includes a component of social service — working on a Colorado trail near Aspen.

There are a growing number of efforts designed to encourage families to get outdoors. Stop by an REI store and pick up a free adventure journal packed with activities, games, stickers and more. After participating in at least one activity, visit www.rei.com/passport and receive special prize for the kids. The Website www.grandparents.com is asking grandparents to collectively spend 1 million hours outside with their grandkids this summer (www.grandparents.com/play). For each hour, they’ll make a donation for each hour logged to KaBOOM, a nonprofit organization trying to put a playground within walking distance of every child in America.

Even the federal government is getting into the act. Secretary of the Interior Ken Salazar has just announced the creation of The Office of Youth in Natural Resources to coordinate present and future youth initiatives, including a 21st-century Youth Conservation Corps.

However you decide to go and wherever you are — a national or state park, or private campground — rest assured there would be plenty to entertain the kids. Jim Rogers notes that many campgrounds these days are more like resorts with organized activities (ready to tie dye some T-shirts?), swimming pools, staff ready to help novice campers and friendly neighbors all too happy to share a cup of coffee or beer. “This is where people go and feel good,” he says, adding that campgrounds are so safe that parents feel comfortable allowing (older) kids to tool around on their own.

Still, it’s important to be mindful of safety, especially when camping with young children says Kari Cobb, a ranger at Yosemite National Park in California, who has reunited many kids with “lost” parents. Tag team to make sure one adult always has their eyes peeled on young children. Give each one a whistle and explain when you hike, you need to stay with a buddy, stay on the trail, and if you get lost, stay put and “hug a tree,” until you are found.

Sure there are bugs. It may rain. And you’ll probably use that first-aid kit more than once. But that’s a small price to pay for the chance to experience nature through your child’s eyes, says Ada Smalls, the mom of two young campers, and a naturalist manager at the Aspen Center for Environmental Studies (www.aspennature.org).

Got the bug repellent?