Taking the Kids — On Spring Break 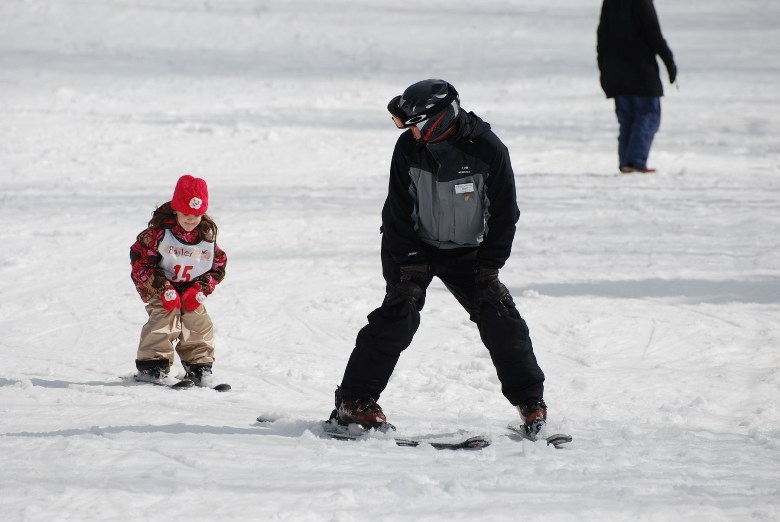 Learning to ski at Bolton Valley in Vermont

Who says college kids have all the fun?

I’ve spent spring breaks hunting for the “perfect” Sand Dollar on a Sanibel Island beach, watching major leaguers at spring training games, along with my little leaguers, and exploring the Grand Canyon with a couple of young hikers who were thrilled to become Junior Rangers.

So, if you think spring break is only for college kids, think again. While more college students opt to do volunteer work on their breaks (and you can certainly find a family volunteer project, too) families have discovered that it is easier — and often cheaper — to get away in the spring than in the summer when camps and summer jobs — not to mention work schedules and peak travel season perils — wreak havoc with family vacation planning.

That’s why despite the recession you can expect to see parents and kids racing down ski slopes all around the country (www.ski.com ). In Vermont, try a smaller, less expensive area like Bolton Valley (www.boltonvalley.com ). California’s Northstar-at-Tahoe (http://www.northstarattahoe.com ) offers deep family discounts. Kids can ski two days here for $30 and you get half-off a second kids’ ski lessons.

Or choose instead to cheer on your favorite teams at spring training games in Florida (www.floridagrapefruitleague.com ) and Arizona (www.cactusleague.com ). Look for deals like at the InterContinental Tampa (www.intercontampa.com ), which is close to George Steinbrenner’s Legends Field. Here you’ll save 25 percent on the best rate and get a “Fan Tool Kit,” which includes a baseball for signing, a box of Cracker Jack and a lot more. (The kids will love this!) In Arizona, the historic Wigwam Golf Resort & Spa (http://www.wigwamresort.com/ ) offers an overnight spring training escape package starting at just $219, plus resort credits, while the W Scottsdale Hotel & Residences (www.starwoodhotels.com/ ), a hip downtown property, promises the chance to mingle with the players at practice, suite accommodations, signed baseball gear and buy-one-get-one tickets — as long as you can afford $1,000 per night.

Throughout March and April, look for deals in Hawaii like those at Maui’s Honua Kai Resort & Spa (www.honuakaimaui.com ). Honua offers up to 35 percent off the room rate, which starts at just $260/night for a one-bedroom suite. Or try the Caribbean (look for kids up to 15 free deals available now at Club Med, www.clubmed.com , as long as you book by March 1.) If sailing is more your style, share dinner with grandparents on mega cruise ships (www.cruisemates.com ) while happily comparing notes at what a great deal you scored.

“In past years, many of these ships and categories would be sold out by now,” according to Heidi Allison-Shane from Cruise Compete.com (http://www.cruisecompete.com/specials/holiday/spring_break_cruises/2 ). She notes that while prices are up from last year, they still remain 10 percent lower than 2008 with especially good deals on the ultra deluxe liners. “There is great availability right now as consumers are waiting until the last minute to book,” she adds.

You certainly don’t have to bust the budget either. Take a short cruise, for example, from a port near your home (Norwegian Cruise Line (www.ncl.com ) is launching Nickelodeon-themed cruises from New York City in late April) or head to a ski resort touting free nights and lift tickets (The Canyons (www.thecanyons.com ), for example, in Utah gives two lift tickets for every room booked). Take the train (kids travel at a deep discount on Amtrak, www.amtrak.com ) and explore a nearby city. (Look for the latest family hotel deals on city tourism Websites like www.bostonusa.com , www.nycgo.com  or www.onlyinsanfrancisco.com ).

Go with one child if the others have to stay home. Go solo if your significant other can’t get away. Use the opportunity to try something new. Learn to scuba dive or snowboard, explore a museum devoted to sport like the Naismith Memorial Basketball Hall of Fame in Springfield, Mass., (www.hoophall.com ) where basketball was first invented, or music (the Rock & Roll Hall of Fame in Cleveland, Ohio, www.rockhall.com  or spies (the International Spy Museum in Washington, D.C., www.spymuseum.org ).

So many families come to Orlando for spring break — 2.6 million visitors in March and April — that you’ll see more kids here than at any other time of year, except summer. And it won’t be nearly as hot. (Check out the new Super Deal program and new Magicard offers on everything from Disney World attractions to accommodations and restaurants, www.visitorlando.com/deals ). Buy three nights and get two more free, including a week’s unlimited admission to Universal Studios’ two parks where the much anticipated “Wizarding World of Harry Potter” will open later this spring — less than $800 for two adults and two parents (www.universalorlando.com ).

You may even score free admission to see The Mouse himself at Walt Disney World, if your family spends a day volunteering. (Visit www.disneyparks.com  for details and other deals). Look for hotel packages in Orlando and elsewhere, especially for families. In honor of Holiday Inn Club Vacations in Orlando, Fla.’s first anniversary (www.hiclubvacations.com/anniversary ), for example, guests can score an upgrade to a two-bedroom villa, a $250 resort credit, lazy river tubes, mini golf and more.

Or you can avoid hotels entirely. One friend checks www.craigslist.com  for apartment rentals in cities where she wants to visit and proposes what she’d like to pay, typically scoring a deal — at half the going rate, she boasted. Also try sites like www.vrbo.com  and www.homeaway.com  where you can also negotiate directly with a homeowner or check out www.perfectfamilyvacation.com  for good deals on digs in resort locales with multi-bedrooms. Travelocity  has more than 100 hotels for under $100 per night. Hotels are where the values are this spring with rates down 10 percent or more in destinations like Orlando, Cancun, Honolulu, South Florida and Tampa/St. Petersburg, reports Travelocity’s Genevieve Brown.

Last spring break — my daughter Mel’s last before she went away to college — I let her lead the way straight to Austria’s Oetztal Valley, about an hour from Innsbruck. We holed up in the Hotel Regina (www.hotel-regina.com ), a small, quaint hotel, and skied every day, traversing glaciers, viewing the Alps and stopping at traditional wooden huts for hearty lunches of homemade sausage and apple strudel.

Mel, an avid skier, was thrilled by the mountains and by the fact that she could drink legally. I was thrilled to have her all to myself for a few days.

“Good bonding time,” she told me.

Exactly what a spring break should be — wherever you go.