Taking the Kids to a galaxy far, far away … with Disney 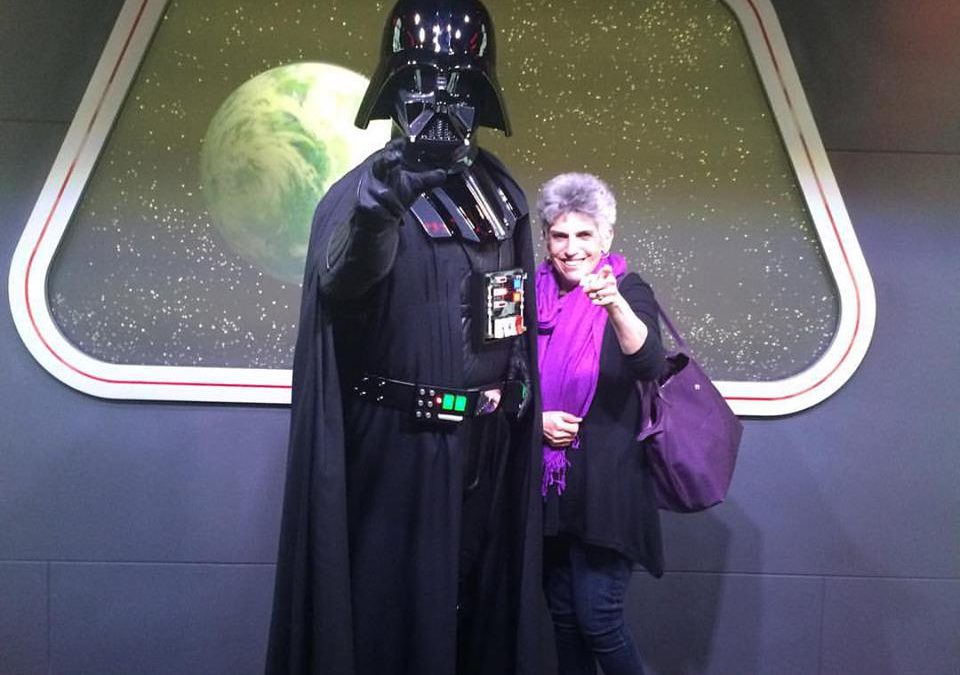 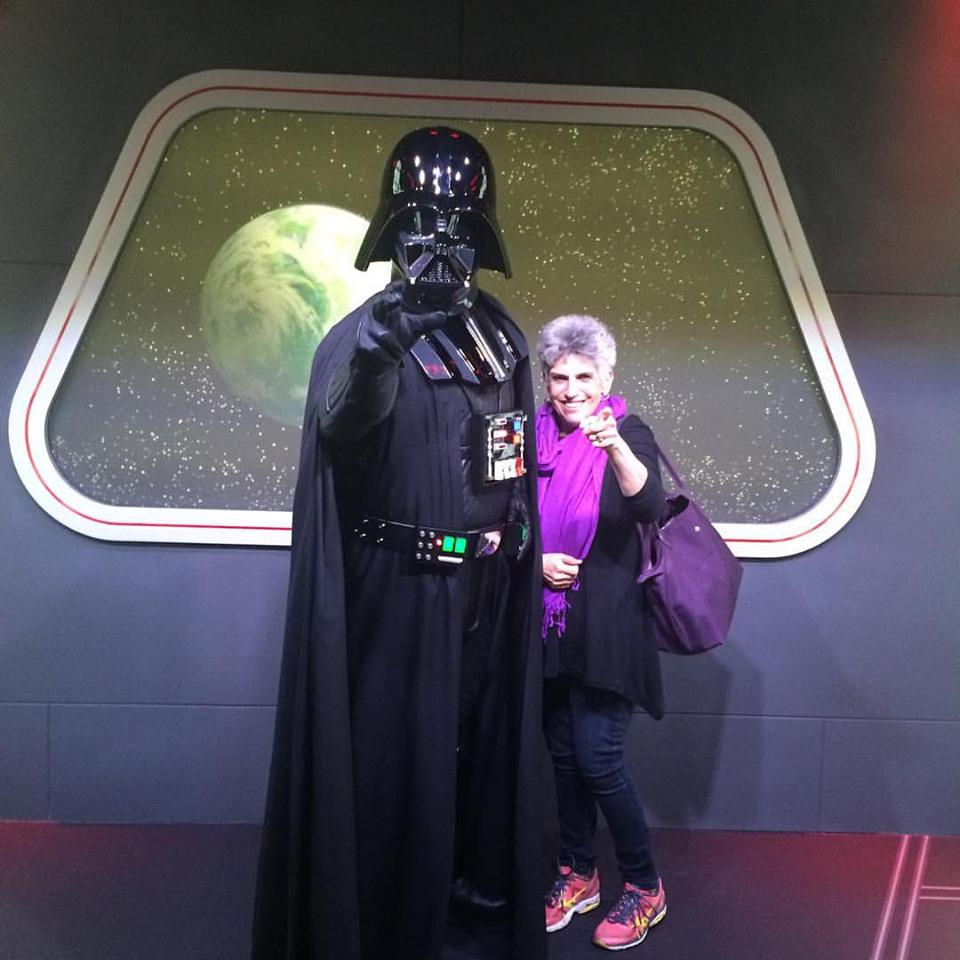 “I sense that your loyalty is not with the Empire,” Darth Vader declares.

“We are looking for a Rebel Spy. Perhaps it is you…”

I’m speechless. You would be too with a menacing Darth Vader haranguing you behind his black helmet and costume. But then I laugh and we pose for a picture. This is Disneyland, after all, at its immersive best.

Welcome to Star Wars Season of the Force, a new celebration of all things “Star Wars” unveiled at Disneyland, along with its holiday attractions in the midst of the park’s 60th Anniversary Diamond Celebration and just before “Star Wars Episode VII” is set to debut in theaters Dec. 18.

By the time I met Darth Vader, I’d already blasted through the galaxy during a battle between Rebel X-wings and Imperial TIE fighters on Hyperspace Mountain, journeyed to a new destination on Star Tours-The Adventures Continue and relived iconic moments from the films in the Tomorrowland Theater during “Star Wars: Path of the Jedi.”

(A tip: Expect big crowds. Plan to arrive early and immediately get your FastPass for Hyperspace Mountain and Star Tours — The Adventures Continue or they will be gone for the day.)

I sample a First Order Specialty Burger on a dark bun, sip a brightly colored drink with a light-up Death Star and nibble Darth by Chocolate for dessert, all the while considering if my budget could spring for a life-sized $9,000 Storm Trooper statue. Perhaps my own “Star Wars” personalized smartphone case would be a better bet — or a light saber I build myself.

In case you didn’t know, Disney now owns Lucasfilm — George Lucas, of course, is the creator of “Star Wars” — and there has, perhaps, never been such a cross-promotion involving a film franchise, new theme park attractions on both coasts and on the Disney Cruise Line and merchandise. Need some “Star Wars” boxers or maybe a skirt decorated with a light saber design? 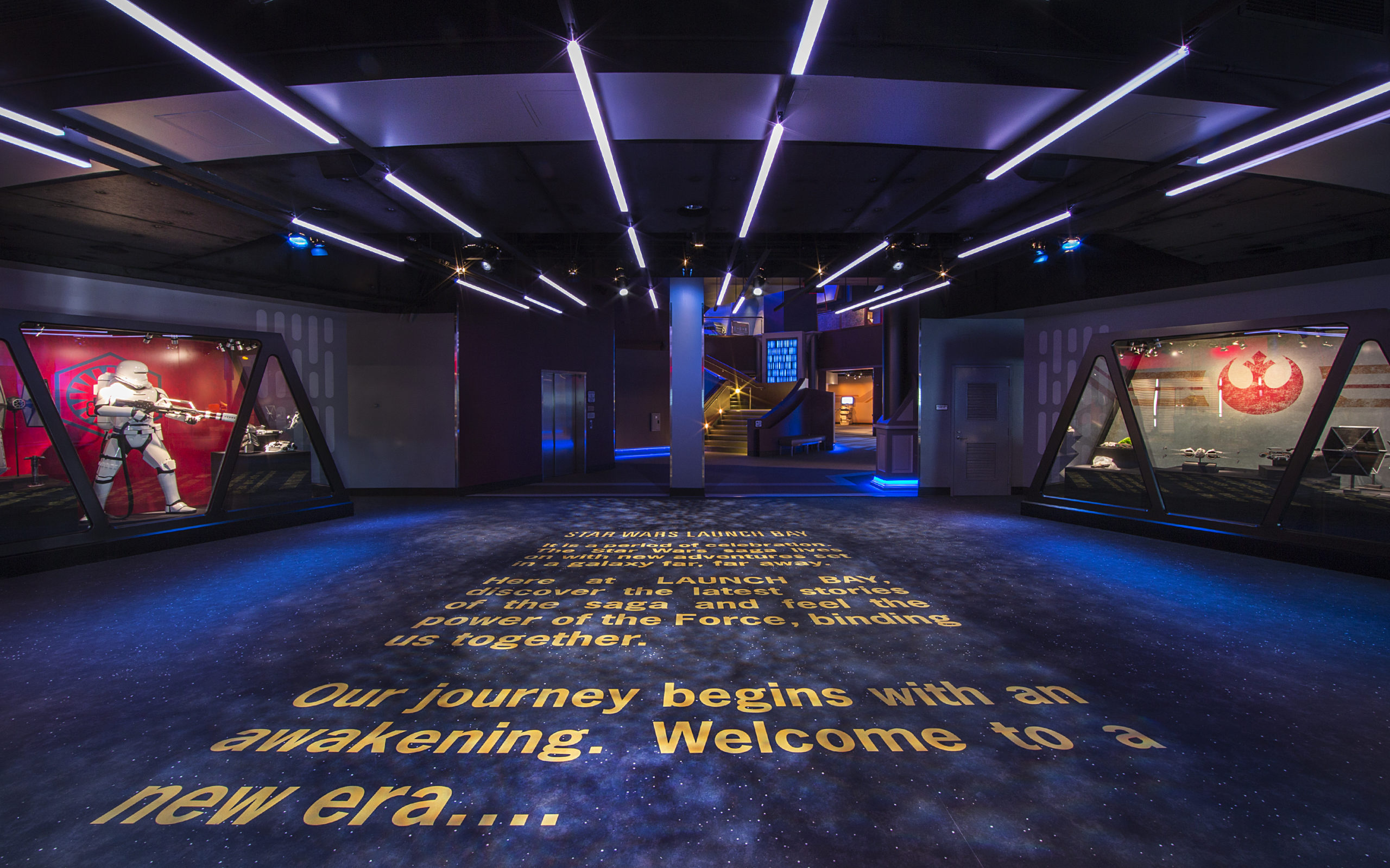 “It’s a new golden age for ‘Star Wars,’” said Brent Strong, a creative director of Disney Imagineering, who has been a lead on the project in the two parks and admits he has a collection of droids (you can design your own in the park) in his office. He believes there is something for fans of all ages here — those who grew up with the movies and young fans who know the Disney Infinity video game and TV series.

Strong said Disney’s creative teams have been working on this for the past 15 months, adding more of a story arc to Space Mountain, for example. “It’s like stepping into the ‘Star Wars’ world,” he said.

Bob Iger, Walt Disney Company chairman and CEO, already has announced that “Star Wars”-themed lands will be coming to Disneyland and Disney’s Hollywood Studios with groundbreaking next year. The 14-acres of land in each park will be the largest single-themed land expansion to date.

I met Darth Vader in the new interactive Tomorrowland Space called Star Wars Launch Bay, packed with props and models that fans will love, videos interviews with those who have brought “Star Wars” to life, only-get-it-here merchandise (everything from a “Star Wars” purse to a Darth Vader helmet — $675, in case you are wondering), and most important to kids, and big kids, the “Star Wars” Game Center where guests can play the latest video games, including Disney Infinity 3.0 with park-exclusive Toy Box Levels.

At the Galactic Grill, kids can order a Jawa turkey sandwich or a Force Power Pack with yoghurt, carrots and more.

Jedi Training opens this month too with Darth Vader and the Seventh Sister Inquisitor, a new villain kids know from the popular Disney XD series “Star Wars Rebels.” By the way, if you’re a light side guy or gal, you can opt to meet (and take a selfie with) Chewbacca rather than Darth Vader. There are light side offerings at the Galactic Grill, too.

No worries if you live closer to Orlando. At Walt Disney World’s Hollywood Studios, you’ll find Star Wars Launch Bay, the same cinematic overview of the “Star Wars” saga; and the cool, new enhancements for Star Tours — The Adventures Continue (you’ll never know where in the galaxy you might go!) and, of course, there’s Jedi Training: Trials of the Temple. (Check before your trip to see if you can pre-book any of these experiences as you can other popular attractions.)

Starting Jan. 5, 2016, look for storm troopers patrolling the Orlando park and the “Star Wars”-inspired food already being scarfed up in Calfornia (maybe a Darth Tamale for breakfast) already available in California, plus a fireworks show called the “Symphony in the Stars: A Galactic Spectacular.”

There’s plenty for Star Wars fans aboard Disney Cruise Line too. On certain cruises aboard the Disney Fantasy from Port Canaveral (January to mid-April) you can join the day-long “Star Wars” celebration at sea with a special deck party with the heroes and villains, screenings of the films and the Disney XD animated series “Star Wars Rebels,” “Star Wars”-themed youth activities in the Oceaneer Club and Oceaneer Lab, a shipboard version of Jedi Training, and for grown-ups, specialty cocktails and music.

Aboard the Disney Dream, just returned from dry dock, there is a newly themed area in Disney’s Oceaneer Club, complete with a “spaceship” where kids can join the Rebel Alliance, piloting the spaceship to different areas in the galaxy. Expect “Star Wars”-themed crafts, games and activities, a high-tech interactive space based on the Disney Infinity video game and the chance to hone their light saber skills.

Disney officials won’t say how long Season of the Force will last, though Strong said the Imagineers certainly will be looking at what works — and presumably what doesn’t — as they plan their new lands.

But for now, I’ll have another Darth by Chocolate — after another ride on Hyperspace Mountain.