Taking the Kids — To Patagonia 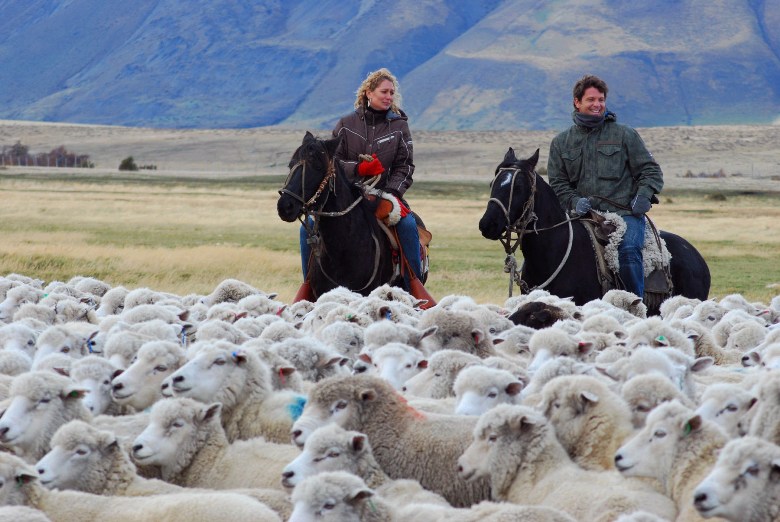 Horseback riding on an Estancia in Patagonia where you share space with the sheep.

Ready to hobnob with the locals?

Of course, the locals in Chile’s famous Torres del Paine National Park in Patagonia are rhea, small ostriches, the gray fox, and herds of guanaco — a kind of llama who totally ignore us as the males chase each other (only one male can be dominant in a herd of females) and the females nurse their oh-so-cute babies. More than a dozen condors fly overhead so close we can make out the white on their wings, which span nine feet across!

Many say this huge park is the most beautiful in South America and it is heart-stoppingly gorgeous — turquoise-blue lakes, soaring snow-covered peaks, glaciers, fields dotted with red grasses and green-and-yellow shrubs called “mother-in-law’s chair,” because of their thorns, according to our guide Gabriela Flores.

While my husband and I gape at the wildlife, my daughters Mel and Reggie and Reggie’s boyfriend Dan Foldes have opted for the park’s challenging signature hike up to the base of the famous “Three Towers,” braving gusting winds along the way.

That we can opt for different adventures is a significant plus of the Hotel Remota (www.remota.cl ), one of the most striking and unique places I’ve ever visited. Located about 90 minutes from Torres del Paine on the outskirts of the town of Puerto Natales in what is considered the geographic center of Patagonia — the region is perhaps the next “it” place for adventurous American families. Indeed, a significant number of Americans are discovering Chile, Chile Tourism officials report (www.turismochile.travel ) — perhaps because the stable country has become a Mecca for American college students studying abroad. And parents are opting to explore the country at the same time. (American-owned Santiago Adventures (www.santiagoadventures.com ) helps American families plan trips here. (We used Fodor’s Chile, www.fodors.com , and Lonely Planet Chile & Easter Island, www.lonelyplanet.com , to help plan.)

“We wanted to go to Patagonia for the vastness,” said Californian Joy Mistale, who traveled with her husband and three kids to Remota. “And we like more physical vacations.”

They certainly have their pick here — horseback riding on private ranches with bona-fide gauchos who, over a campfire, make us mate, the traditional South American drink. (Mate is prepared by steeping dried leaves of yerba mate and is sipped through a metal straw.) There are hikes that require bushwhacking up mountainsides, mountain bike rides around crystal blue lakes and the chance to get up close and personal with a glacier in a small zodiac. Affable guides from the 72-room resort lead each excursion.

The hotel’s grass-planted roofs and soaring public spaces, which utilize native woods, reflects the colors outside — whitewashed walls for the snow, black furniture for the black hills. Did I mention the hot tub where you’re offered champagne while you take in the view of the canal Senoret?

Remota is the work of prize-winning Chilean architect German Del Sol (he did the well-known Explora hotels here) whose son Matias serves as the head guide here. “Whatever you want to do, they find a way to make it happen,” says George Corey, a Washington, D.C., attorney. “They never say no to you.”

The resort is all-inclusive, which means all of your food and activities are part of the deal, but this isn’t a place to hole up in your room — there are no TVs or radios and room service is discouraged. (The idea is to gather on the colorful couches in the common spaces to compare notes on your adventure of the day, check email, play Scrabble, nibble on an empanada or sample some fresh strawberry juice or perhaps a Pisco Sour, the favorite native drink, made with Pisco grapes. (It tastes like a cross between a Margarita and a Whiskey Sour.) (Check for packages that include free days, airport credits and more. Mention ttk-old.o2dev.net when you book directly with Remota and one child in your party, 16 and under, stays free when accompanied by two paying adults. This offer, which includes the child’s meals and excursions, is valid until Dec. 15, 2010. Some restrictions apply.)

Patagonia is still a place you won’t find any crowds — or even trails in many places. Consider that Torres del Paine gets just 145,000 visitors a year — compared to millions at Yellowstone or Yosemite. Matias Del Sol points out that 70 percent of the excursions Remota offers are to locales where you won’t meet anyone else — aside from locals, four-legged and otherwise. “The idea is to share the culture,” he explains. And the food!

After a four-mile hike through an old forest and fields of daisies along the Eberhard Fjord, we arrive at camp to the aroma of a whole lamb roasting on a spit over blistering hot coals — a traditional Patagonian barbecue on land first settled in the 1890s by the Eberhard family. The grandson of that settler, Herman Eberhard presides over the feast.

The cook slices big hunks of lamb off the spit and tosses them in a big stainless steel pan. Seated family style, it is up to us to serve ourselves. Lamb has never tasted so good. When we’re sated, we wander outside where everyone collapses in the grass for a post-lunch siesta. Then it’s decision time — another hike up to a lookout, a bike ride back, or a quick boat ride to where the vans are parked ready to whisk us back to our home away from home?

“This isn’t for the guy who wants to go to Cancun,” laughs Matias Del Sol. “It is for a certain kind of guest.” A family, for example, that loves to explore new places together and believes the schlep to get here — 11 hours from New York, four hours to Punta Arenas and then a three-hour drive — adds to the adventure, especially when you can stop to see a penguin preserve along the way!

And then there is the weather. Think summer in Alaska or fall in San Francisco where you need fleece jackets and good rain gear that will protect you from the inevitable winds. American Bill Penhollow, co-owner of a small local hostel called Erratic Rock (www.erraticrock.com ), jokes, “We tell people to hope for summer and be ready for winter.” Locals, he adds, are convinced 2010 will be a breakout year for tourism.

“This is an absolutely unique place,” Matias Del Sol promises. “Nature is still very untouched here and there are not many untouched places left in the world.”

I didn’t want to leave.

(For more on Eileen’s Patagonia adventure and other adventures in Chile, read her travel diary .)