Taking the kids to the new FantasyLand at Disney World 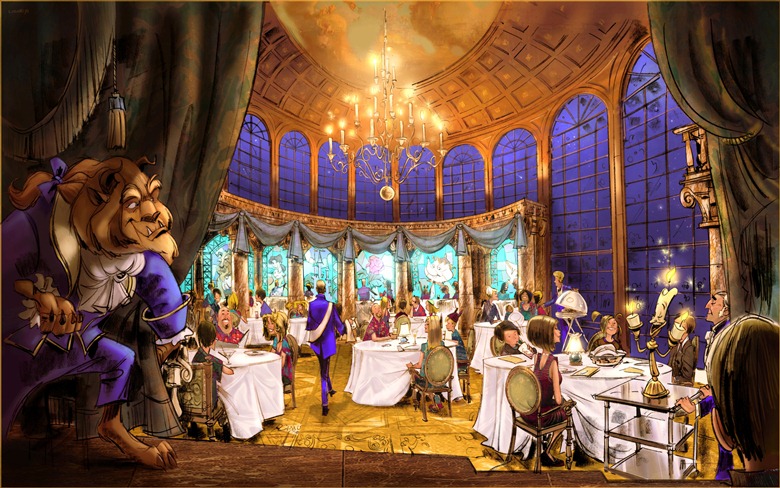 Be Our Guest Restaurant at Walt Disney World

ORLANDO, FL – (Day One of Five) — What would Walt have thought?

Walt Disney always said Disneyland would continue to grow “as long as there is imagination left in the world.”

The hundreds of his employees who spent the last five years doubling the size of the most popular land in the most popular park in the world took that to heart—more than 140 disciplines working on both Coasts.  “It was a daunting task,” said Chris Beatty, the Creative Director of the New Fantasyland at Magic Kingdom of Walt Disney World, as the biggest expansion in the park’s 41 year history was unveiled this past week.

“Walt always was a big proponent of trying new things and it is in our DNA to carry it forward.”

And they have—from the chance to step through a magic mirror in Belle’s cottage to the Beast’s castle where you  not only get a hug from Belle but act out the story of how she and the Beast met  (immersive  story telling is the new buzzword here),  to the chance to board a clamshell and travel with Ariel in the Journey of the Little Mermaid to the doubling in size of the iconic ride Dumbo the Flying Elephant, complete with  an air conditioned “big top” play area where  families can wait, their pager telling them when it is time to ride. Cinderella Castle is now joined by the Beast’s Castle and Prince Eric’s Castle (it’s above the entrance to Under the Sea Journey of the Little Mermaid.

“I really like how you are part of the story,” said 11-year-old Nicole,  who lives in Orlando and comes here all the time, yet was bowled over by the new attractions—especially  the Enchanted Tales with Belle.

Lumiere the talking candelabra talks to us; so does Madame Wardrobe.  “I know how it’s done and I’m bowled over,” said Chris Beatty, creative director for New Fantasyland with Walt Disney Imagineering.  Kids and adults are assigned different roles to act out the story of how Belle first met the Beast and given cardboard cutouts to represent costumes—whether Chip the teacup, Mrs. Potts the teapot, the Beast, Phillipe the horse.  We’re encouraged to make the sounds of the forest, of horses galloping.

The best part:  the 12 minute play is different each time because those playing the roles are different—one day it might be a four year old playing Beast; another time a grandmother.  “To be inside the story—inside Beast’s castle, we think we’ve cracked the code with this,” said Imagineer Jon Georges.

Boys, he notes, have as much fun as girls since this isn’t just a princess experience. So do adults and even teens.

“It’s not just for little kids,” added  Milica, a high school freshman from Orlando , who was having as much fun as four year-old Isla who joined us to try out the new attractions.

That’s exactly the reaction the Disney Imagineers who spent five years  on what Jon Georges, the show producer for the expansion, calls “A once in a lifetime  project,”  like to hear.  “We’re telling stories in new ways,” he explains.  And when those kids at the opening intuitively get that means it’s a home run.

They’re serving food in new ways too—from the LeFou’s Brew from Gaston’s Tavern in New Fantasyland (the no-sugar added, apple based concoction designed to look like an old-fashioned tavern brew and 250 calories, says  Maribeth Bisienere, the Vice President for Food & Beverage at Walt Disney Parks & Resorts), to the Be Our Guest Restaurant where you can get “great food fast” during the day and full service dinner (the first time wine and beer are being served in the Magic Kingdom) at night by a wait staff that are dressed in European fashions inspired  form the 1400s to 1600s.

I love that at lunch, you can filter out what you are allergic to at the touch stations in the Beast’s Parlor  and then order something like  a Croque Monsieur or tuna Nicoise salad or quiche; you get a “magic” rosebud, find your table and the food is delivered.  No standing with trays looking for tables. I love that at night, kids can order healthy turkey meatloaf shaped like mouse ears and orange ketchup made from scratch using carrots.  “Kids are more willing to try new foods when parents don’t interrupt, especially if you make it fun and colorful,” says Bisienere, the mother of three. (You might have mussels, cured meats with cornichons, whole roasted hen and gourmet cupcakes for desert.)

She notes that not only are people’s palates more sophisticated but they  are seeking more healthy options (65 per cent now opt for the kids’ menus that are served with fruit or veggies rather than fries) as well as foods that are vegetarian, gluten free, etc.  “For many it is a lifestyle choice,” she said.

Did I mention that reservations to eat dinner in the Beast Castle are already booked for six months?  It is cool to eat in the Ballroom complete with 20-foot ceiling painted with cherubs and windows that look out in the French countryside where snow is falling.  Maybe you’d rather be in the West Wing dining room where the glass jar containing the enchanted rose is slowly dropping petals or the Rose Gallery with its seven-foot tall music box with Belle and the Beast twirling. Check out the paintings—original artwork from the movie—some of scenes you never actually saw.

No worries if you can’t make it to the New Fantasyland for a while either.  There’s more to come.  Next year, Princess Fairytale Hall will open complete with chambers where you can meet Aurora, Cinderella, Tiana and Rapunzel.

And in 2014, The Seven Dwarfs Mine Train—a family coaster will debut—the first of its kind ride complete with trains that swing back and forth, animated figures of Snow White and the Seven Dwarfs and more.

You’re never too old either.  “There’s something here for everyone,” said 11 year-old Nicole.

“You relive the magic of your childhood,” said 14-year-old Milica. “And you appreciate it more than when you were a kid.”