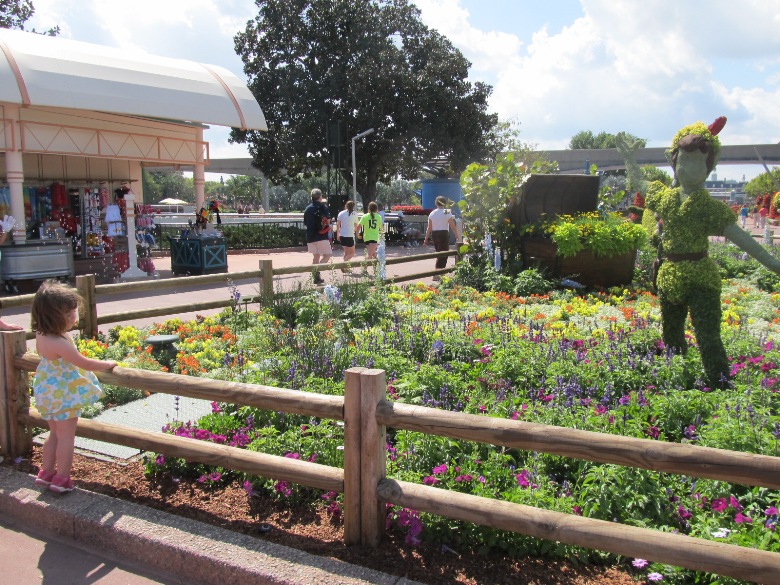 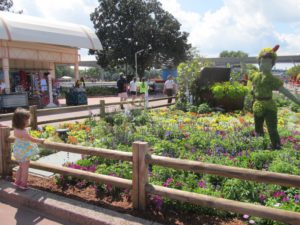 When we got to Magic Kingdom the first day we were in DisneyWorld, it was a little overwhelming. After walking through Cinderella’s castle, we were greeted by Hannah Montana’s “We Got the Party With Us” blasting on the speakers scattered throughout the part of the park we were in. Soon after, we found ourselves in the middle of a Disney World “street party”.

Minnie, Mickey, Mr. and Mrs. Incredible, Goofy, Genie, the Mad Hatter, you name it, were all riding around giant floats around us dancing and singing. There were people on stilts and dozens of costumed dancers adding to the energy of the parade. Even though it might have been a little juvenile for two girls headed to college in the fall, it was still entertaining, something we found Disney does pretty often.

After we left Magic Kingdom, we headed over to Epcot. There are two parts of Epcot: Future World and the World Showcase Arena. In Future World you can find the iconic “giant golf ball”  (Spaceship Earth), along with other attractions like Test Track. Test Track is a roller coaster that simulates the various tests that cars go through while being made, and while the break and terrain tests were a little bumpy, we’d recommend this ride to people who don’t like the huge drops of some of the other coasters. While it was a fun ride, it probably isn’t worth an hour wait.

Our favorite part of Future World was definitely Soarin’ (you’ll want a FASTPASS when you get to Epcot for this one, the wait when we went was over an hour) which simulates hang gliding over different scenic parts of California. You’re surrounded by an enormous screen showing things like the vineyards in Napa Valley, the Golden Gate Bridge and even the geysers in Yellowstone, all from an aerial view. Even though we both usually love those scary drops on roller coasters, this is definitely something you don’t want to miss, simply because of the amazing scenery the ride surrounds you with, and the way it becomes believable that you are actually flying closely over beautiful California.

Our next stop was the World Showcase Arena. The arena surrounds a big pond where the show Illuminations (more about this later) happens at night, and is filled with 11 different countries. Our first stop was Mexico, where we ate some mediocre, overpriced tacos (it’s the experience that counts), watched a mariachi band play and walked around the huge indoor market filled with Mexican folk art, jewelry, clothes, and of course, Mexico-themed Mickey ears.

Something we found particularly interesting about the World Showcase Arena was that in every country, virtually all of the “cast members” that Disney were from the country that they work in, just one more thing that adds to the magic of Disney. Some countries were more elaborately detailed than others, China probably being the best example. Steam-breathing topiaries shaped like dragons and intricately painted, traditional Chinese buildings, “reflecting ponds” and more all make up the China Pavilion. If we couldn’t see the Eiffel Tower across the pond, Disney might’ve had us fooled into thinking we were halfway across the world.

We went to dinner at Todd English’s Blue Zoo in Walt Disney World Dolphin (the liquid nitrogen-topped-popcorn is something definitely worth trying), and then walked back to the World Showcase Arena to see IllumiNations. It is a fireworks, fire and lazer show on the pond. At first, we couldn’t find a place to stand on the crowded railing surrounding the pond, but soon after the show started we realized it didn’t matter. The fireworks at IllumiNations blew the ones at Cinderella’s Castle out of the water. A 350,000 pounds, a lit-up Earth floated across the water, showing scenes from different countries around the world, followed by a colorful finale of fireworks. Everyone who was there, young or old seemed to be thoroughly enjoying themselves, IllumiNations is another must-see while you’re in Epcot.

A few things we learned traveling around Disney: wear comfortable shoes, the monorail takes longer than you expect it to and avoid the ferry at all costs unless you have an hour to spare to go a half a mile.