The Amazing Cathedral of Thorns in Curacao 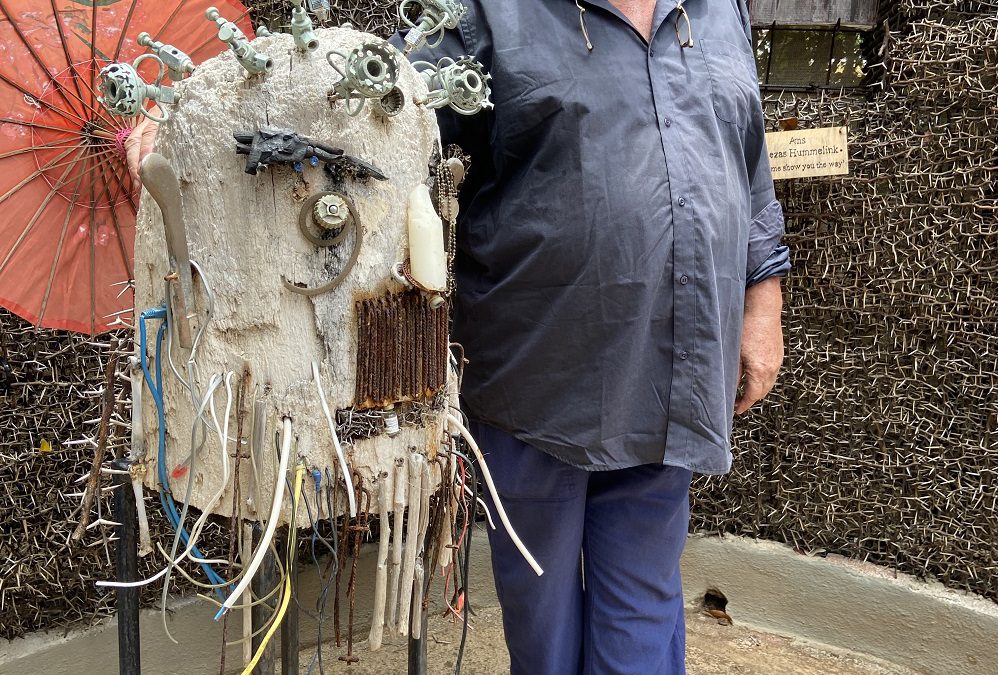 Think a kind of maze made out of thorns—92 million in fact fashioned into blocks in which art has been inserted, creating an open-air gallery of sorts.

“This is an ode to the free spirit,” explains artist Herman Van Bergen, who is Dutch but married to a Curacao woman. They have lived here for decades.

The monumental art installation was opened just before the pandemic—it took eight years to create—and since has drawn many thousands of visitors. The first Friday of the month, the Cathedral of Thorns is lit, shimmering gold. The thorns are local from the Acacia Tortuosa bush tree. The walls of thorns have niches housing the contemporary art. The idea is to raise consciousness of our similarities by including symbols of world religions.

Teen moms work on repairing and creating the blocks of thorns, signing their work and giving the young women purpose and a sense of accomplishment. There are symbols of the world’s religions—Islamic, Christian, Shinto, Muslim, among them as well as symbols of Facebook, Twitter, Instagram, What’s App, and Google. That’s because, the free-thinking and jovial Van Bergen says: “Social media doesn’t want you to think free and many young people suffer from that.”

One of his sculptures within the exhibit whimsically represents the effects of Covid-19, including a Hitlerian mustache to remind us that it helps foster modern day fascism.

There are 50 artists who have a relationship with Curacao represented and the hope is for expansion to allow for 50 more as well as a butterfly garden. There are paintings, blown glass, giant sculptures and conceptual art including a wildly decorated pay phone to God who never answers by artist Gwen Anderson.

This is all housed on a seven-acre garden about 10 miles east of the city of Willemstad at the Landhuis Bloemhof Foundation. That has long been a meeting place for art lovers and dedicated to fostering the arts by supporting local artists and children alike. You can see children’s drawing hanging outside; Works of different local artists are showcased each month.

Children’s wishes are posted “To see more art,” one girl wrote. “That we think beyond yourselves,” said another.

The tradition was begun by sculptor May Henriquez, whose grandmother first purchased the house more than a century ago. But because women were not permitted to own or purchase property, her son bought the property. Since then, it has been female owned. The family, incidentally, were the descendants of the Sephardic Jews who were so instrumental in developing Curacao’s economy dating back to the 17th century. (The Mikeve Israel-Emanuel synagogue was dedicated in 1732 and is the oldest in continuous use in the Americas and was instrumental in other congregations getting established including in Newport, RI and New York.)

You can visit the studio of May Henriquez and the open-air sculpture studio of Hortence Brown. Enjoy brunch or lunch at Number 10, the former house of May and Max Henriquez where on the patio you can enjoy everything from chicken wraps to burgers to fresh tuna tacos and spectacular deserts. How about rainbow cake?

The Cathedral of Thorns can last forever, the artist says, as long as the blocks of thorns continue to be replaced. “It will never be finished,” he added.