The amazing sights you see in and around Lake Placid, NY 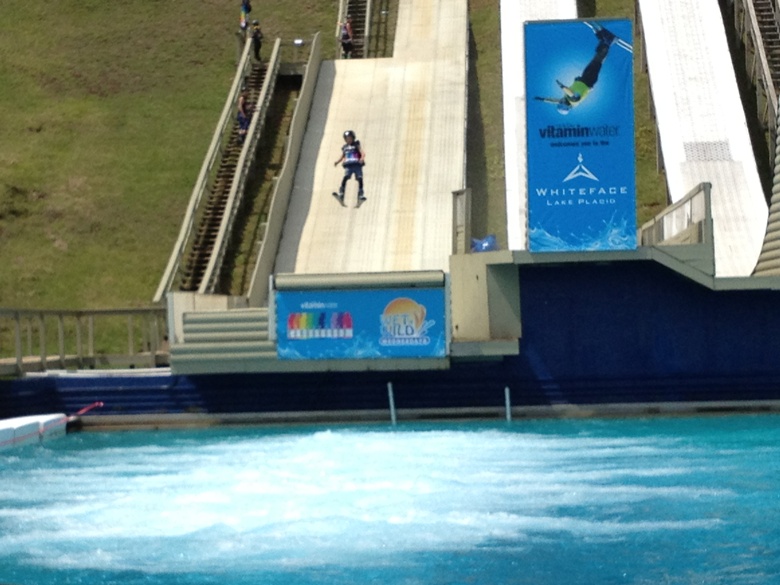 DAY FOUR (Lake Placid, NY) — Fourteen year old Massou Traore spreads out her arms and looks skyward.  She feels like she’s on top of the world.

Well, not quite.  She’s 4,867 feet on top of New York State to be exact—on top of Whiteface Mountain.  We’ve just driven up the Veterans’ Memorial Highway to the summit (we could have hiked!) for a spectacular view of the Adirondack Mountains, Lake Champlain and Lake Placid.  There are plenty of hikes through the Wilmington Wild Forest whether you want to go a quarter of mile or 10 miles.

“I don’t want to leave,” she said.  “I love this.”  This from a Bronx girl who thinks hiking is the worst possible punishment yet loves being outdoors in the mountain air as well as relaxing at The Whiteface Lodge where we’re comfortably ensconced.

Here at the summit, there is a famous Castle that was built with rock excavated when the road was built and which boasts at 4,610 feet  that it offers the highest dining in the Northeast.  (I’m not sure Coloradans would be impressed but it is beautiful and picturesque. ) All along the roadway are new exhibits from The Wild Center to help us appreciate what we are seeing.

Yesterday, we’d been treated at Whiteface Lodge where we are staying to a boat ride around Lake Placid.  Up here–we can see the Lake’s three islands—the larger Moose and Buck and smaller Hawk as well as Mirror Lake right in the town of Lake Placid.

We’d walked through a damp 426-foot tunnel carved into the mountain to board an elevator up 27 stories—the easiest summit I’d ever reached–to sprawl on the rocks looking at the spectacular views.  There is also NY State’s Atmospheric Sciences Research Center here, so visitors can learn about the extreme weather (snow in July!) on the top of this mountain.

There is so much to do here—every variety of hike, kayaking and canoeing, fishing…. and then there is the Olympic History.  Lake Placid, of course, was the home of two winter Olympics—1932 and 1980.  Today, would-be young Olympians come here to the Olympic Jumping Complex to watch Olympic hopefuls jump and do tricks on their skis.  On Wednesdays, at 1 p.m. a crowd gathers to applaud as the freestyle athletes flip and twist into the 750,000 gallon pool; Nordic jumpers from around the word come here to train, soaring off the 90-meter tower.

You can take a clinic on the Wheeled Luge and race down a paved track or ride with a professional driver and brakeman on a bobsled (You’ve got to be 48” tall) Test your marksmanship on some of the  largest used by winter biathletes in World Cup competition or go horseback riding.

On Saturday nights, there are ice shows with skaters from around the country while on “Freaky Fridays” figure skaters compete in more unusual programs.

In the town of Lake Placid, there are free concerts.  As we sit enjoying a fantastic dinner at the Brown Dog Café and Wine Bar –-think summer caprese  salad with peaches  and fresh mozzarella, roasted heirloom beet salad followed by long line caught pacific swordfish,  pan roasted free range chicken or five spice dusted ranch pork chop—we’re watching the kayakers, canoers, and paddle boaters who have pulled up  on  Mirror Lake to  listen to a free concert by the Lake Placid Sinfonietta, the orchestra of the Adirondacks.  One guy has his dog on his paddle board.

As we eat desert—the crème brule was amazing—the boaters glide away on the calm water that does indeed look like a mirror.

And as if our day wasn’t full enough, when I got back to The Whiteface Lodge, I gratefully got into the hot tub—one of three—as other families were gathered by the fire pit making s ‘mores—complimentary of course.  My friend Martha and Massou went mini-golfing down the road.

Whiteface Mountain is under the auspices of the Olympic Regional Development Authority so it is also possible to take the Gondola up to the top of Little Whiteface and hike 1.25 miles to the summit (there are plenty of other hikes there too, including the scenic Stag Brook Fall trail past a 25-foot waterfall!)  as well as guided nature treks.  www.whitefacelakeplacid.com

Of course there is also an Olympic Museum and a tour of the Jumping Complex—but it certainly is more fun to watch the athletes in action—or get the adrenaline pumping yourself on a bobsled.