The Arctic Desert holds many surprises — including Walruses 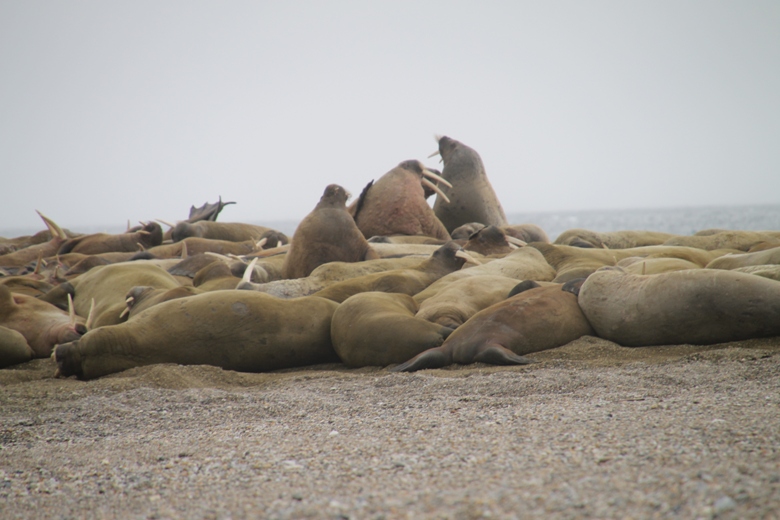 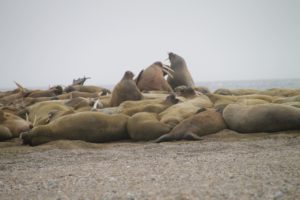 It is 34 degrees and the gusting wind makes it feel a lot colder. I’m hiking behind a man with a rifle, my hands cold inside my two layers of gloves. I’m wearing four layers of clothes as we hike through ankle-deep snow.

Did I mention it is July 7th? Welcome to the Arctic.

The Lindblad Expedition’s  National Geographic Explorer is at Nordaustlandet (northeast land) the second largest of Svalbard’s islands. On the Eastern side of the archipelago, the island is surrounded by ice even in summer.

This is called Arctic Desert, the man with the rifle—naturalist and geologist Jason Kelley tells us.  While hiking in the land of the polar bears, our guides always carry rifles.

We stop to look at huge whale bones that date back to the 18th Century and tiny fossils of crinoids stems (they look like flowers) that are 180 million years old.

Then we see the Walrus. Sixty of them. Huge creatures, some weighing a ton or more, some with tusks longer than two feet. They are in a “haul out,” Kelley explains, rubbing up against each other, rubbing their skin in the pebbly sand in order to slough of their skin. The females and their calves are several miles away on the ice.

All of a sudden, I’ve forgotten the cold and the wind and remembered why I am here—to appreciate nature at its best, at its wildest.  Walrus can be especially dangerous which is why we’re kept at a safe distance several yards away and told to keep silent.

We watch them through our camera lens and binoculars.  They roll on each other and the pebbly beach. Some in our group were surprised when they came out of the water right in front of them but managed to get probably the best vacation pictures they’ll ever shoot.

They raise their heads and seem to stare straight at us.

What a day! We woke at  5:45 a.m. to the sight of tens of thousands of  Brunnich Guillemot nesting high on the cliffs of Kapp Fanshawe on the west  side of the Hinlopen Strait here in the arctic Svalbard.  This is one of the largest concentrations of nesting seabirds in the archipelago but to me it looks like a giant condo for birds. They nest —just one egg per nest—shoulder to shoulder, their backs to the cliff.

“It looks like chaos,” acknowledges bird expert Ian Bullock.  “But this is as organized as a street in Manhattan.  It’s incredible that these birds return to exactly the same spot as last year and the year before that. They will find their partner on the ledge.

Each egg is unique, we learn, and should something happen to the mother, an egg—or even a chick—will be adopted by another member of the colony.

Within a couple of weeks of hatching and before they can really fly, the chicks are coaxed off the high ledges and into the water in search of food and away from predators. They swim out to sea together. Nice involved dads, I think.

Another feast for the senses. Another chance to be “present,” rather than thinking about work or the laundry or the car pool.

Naturalist and photo instructor CT Ticknor laments that vacationing parents too often are relaxing rather than engaging with their kids on vacation. “The reason you travel together is to develop a common language so that your stories intersect,” she believes.

But most important, be present.  What are you looking for?

I think that this afternoon as we pass one of the most stunning sites I’ve ever seen—the Brasvellbreen—the ice cap that covers over half of  the “northeast land” island—some of it almost a thousand feet deep, the third largest in the world.

Apparently this is a good place to spot bears but we don’t see any. The sun has come out and we are stunned by the power of the place—the cliffs of ice, the thick ice pancakes in the water, the waterfalls. We get so close on the ship that it shudders as we go through the ice and we’re warned we may get splashed by the waterfalls.

Even the seniors on board are giddy with excitement, posing for pictures at the bow of the ship with the blue polar bear flag.

I take a deep breath and try to be present.

Next:  Arctic kayaking on our last day in the ice