The beauty, charm and eco-friendliness of Nicaragua 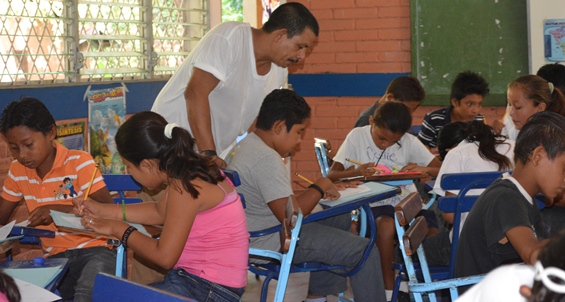 Jake Rothstein, 8, and his sister Maddie, 5, were on a Thanksgiving vacation at a Nicaragua resort, but nonetheless went off to school without complaint.

Their parents, Gordon Rothstein and his wife Jennifer Zagofsky, took the kids to a small school supported by the eco resort Morgan’s Rock (located in southwest Nicaragua, about a 2.5 hour drive from Managua),where they were spending the holidays, bringing much-needed school supplies and soccer balls to the school, which has three teachers who are responsible for 80 kids!

“My kids’ school has three teachers in a classroom,” said Rothstein, who is from San Francisco. There wasn’t electricity, much less any computers or tablets. It was a real eye opener for the whole family.

Part of the impetus for this trip, Rothstein said, “was to recognize what our family is thankful and grateful for and talk about it.”

They were inspired to come to Nicaragua by friends who had visited with their kids, they said, and didn’t want to spend all their time on the beach — as gorgeous as it is — or horseback riding, learning to make tortillas or lounging on the deck of their bungalow without being cognizant of those who live in the surrounding communities. The school they visited is one of six the resort supports, all within 15 minutes of the property. Often resort guests will bring school supplies and sports equipment for some of the 400 children. Morgan’s Rock is recognized here as a pioneer in ecotourism.

Nicaragua, like neighboring Costa Rica, is an easy and safe place for families that wish to include some “voluntourism” on their itinerary, like at the schools supported by Jicaro Island Ecolodge where we also stayed.

(Here’s what I wrote about how they work with local communities). The website Together For Good can help families find these philanthropic opportunities, as can the resort where they are staying. In Costa Rica, you might hone your Spanish skills, for example, and learn about the country’s famous monkeys while volunteering with the Association of Volunteers for service in protected areas.

Another plus, Jennifer Zagofsky said, was that Thanksgiving week, especially heading out of the country, proved easier to travel and much cheaper than at Christmas. We thought so too. We met them at Morgan’s Rock where my daughter Mel was completing an internship, building an organic garden for the resort.

“Christmas has a lot of family obligations,” said Megin Edwards, here with her husband and two young sons and another family from Seattle. “And we wanted to be somewhere not American for Thanksgiving.”

“Besides, where do you find a beach like this?” she added.

Here the waves are gentle, the water warm and there is no one else around — no one fighting over beach chairs, no one hawking souvenirs. Let’s not forget being on the edge of the jungle where you can look up and see and hear howler monkeys howling in the trees.

“The waves are big, but good big,” offers 9-year-old Uma Bratt, here with her family from Seattle and traveling with the Edwards family. “The beach is the best,” declares her brother Roshan, 7.

The kids also like the bungalows. “It feels like being in a tree house,” Uma Bratt explains.

It is an adventure just getting to breakfast, as you’ll need to climb up and down more than 100 steps carved into the dirt, across a wooden bridge high over the jungle.

“This place is really awesome … the whole place is a big adventure,” said 12-year-old Nick Harris, here with his three brothers and his parents from Denver for a Thanksgiving holiday they won’t soon forget.

Nicaragua, often called the “next” Costa Rica, is experiencing a renaissance — and it’s none too soon. The poverty rate here is 40 percent, so tourism is very important. Morgan’s Rock, which opened in 2004, was the first eco-lodge of its type in Nicaragua. The owners were inspired by an eco-lodge they’d visited in Costa Rica.

Morgan Rock’s 15 casitas attract many families seeking an adventure rather than just a beach getaway. Nearly half of the 4,000 jungle acres have been designated as government-protected reserve, while the rest is agricultural land and sustainable tropical wood farm. Turtles nest along the mile-long beach; everyone eats under a thatched roof overlooking the pool and the pacific. “The view is killer,” one guest said.

We went to the resort’s farm, Aguacate Farm, for breakfast and milked one of their 21 cows, there are also six calves. We gathered our own eggs for breakfast and then learned how to make corn tortillas (the secret is a bit of lime and the right amount of water).

The eggs here supply the resort; the ducks and chickens on the menu come from here. The milk is used in making the distinctive cheese served everywhere here.

Then we sit at a long farm table eating those tortillas and eggs accompanied by gallo pinto — the rice and beans dish Nicaraguans eat at every meal — with some of the salty cheese that is made from the cows’ milk and fresh salsa with wild cilantro that grows here. Yum!

A key part of Morgan’s Rock Hacienda and Ecolodge’s sustainability efforts is its involvement with the local community. Nearly all the employees are from the local area; fresh seafood is acquired from local fishermen who practice traditional fishing methods and the resort features pieces handcrafted by artisans in San Juan de Oriente, a village steeped in the tradition of pottery-making. The art form is a vital source of sustainable income for the artisans and their families and we are happy to support it.

Afterward, we stop to see the organic garden my daughter had been working to organize these past months and meet five little monkeys sitting in a tree.

I wonder if they’re arguing about sitting at the kids’ table.

“Not this year,” they seem to be saying, as they jump to another branch.