The civilized route to ski country: The Winter Park Express 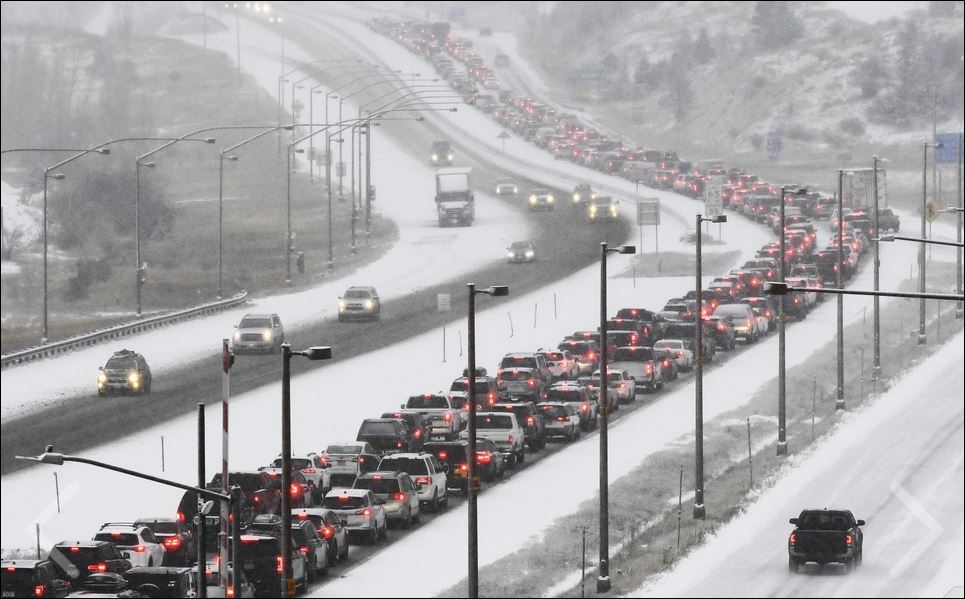 On the weekends, it can be a nightmare driving from Denver to the ski areas in Colorado’s central mountains. If the weather’s good, there’s likely to be miles-long backups on Interstate 70 in the mountains to the west of Denver. If the weather’s bad, it can be even worse. The traffic can leave a driver like me exhausted before even arriving at the slopes.

There is a better way to go skiing — every Friday and Saturday, January-March, Amtrak offers the “Winter Park Express” from Denver’s Union Station to a platform just a short hike from Winter Park’s ski lifts.

The double-decker train can haul more than 500 skiers and snowboarders plus their equipment. We parked at the Hotel Born adjacent to the tracks at Union Station. The hotel offers a Born to Ski package for travelers who want to be close to the train while also in the heart of Downtown Denver. This option is perfect for families, groups or individuals who want to make the most of their trip. The Citizen Restaurant and Bar at Hotel Born are also good picks for more Apres-Ski Train, if you know what I mean.

Train fares start at $29 each way and tickets are on sale at Amtrak.com/WinterParkExpress.

The train departs Union Station at 7 a.m., arrives at Winter Park around 9 a.m.; departs Winter Park 4:30 p.m. and arrives back in Denver around 6:30 p.m. It includes a popular lounge car serving signature Bloody Mary’s in the morning; beer wine and cocktails on the ride back.

Passengers can relax, sleep, read, whatever. No worries about traffic. Even the freight trains on the Union Pacific tracks politely let the Ski Train pass with ease. When we arrived at Winter Park on a recent Saturday morning, I was amazed how energized a felt for a full day of skiing.

And part of that energy came from the train ride. The views are nothing short of amazing. They are unlike anything you can see from a car stuck in bumper-to-bumper traffic on the interstate.

The train rides about 50 miles from downtown Denver, north and west along a route that at one time was called the “Moffat Tunnel District.” That’s because there are about 30 tunnels along the winding route through the Colorado “Flatiron” range to Winter Park — the last of them the 6.2 mile long Moffat Tunnel that ends (or begins) right at Winter Park. It once was the longest railroad tunnel in North America. The center of the tunnel — under the Continental Divide — is about 9,300 feet above sea level — and there is about 3,000 more feet of solid Rocky Mountain on top of that! A lot of the digging was done by manual laborers nearly a century ago.

David Moffat was a prominent Denver Businessman at the turn of the 20th Century who worked diligently to promote and design a railroad route from the city to the west coast. The early transcontinental rail routes of the 19th Century bypassed Denver because the Rocky Mountains to the city’s immediate west were too difficult to traverse. Moffat designed the present day route. it took along three decades to get the route completed in 1928. Moffat did not live to see it through to completion. More here.

“Conductor Brad” and a team of volunteers keep us us informed on our progress as well pass along historical notes, anecdotes and a few bad puns. No stress allowed on this train!

When we got to Winter Park, we were told we could leave our ski and boot bags on the train for the day. No need to find a locker. It was about 100 yards from the train platform to the ticket counter — and from there straight onto the gondola to the top of the Winter Park Ski Area.

Winter Park was once an official city park of Denver – it is now operated by a ski company but the City of Denver retains an economic and political interest in the resort. It is popular with “locals” from Denver, Boulder and Fort Collins because it is one it’s close proximity to the Front Range.

More than that, it has some of the best skiing and snowboarding terrain in North America. I first skied here in the 1970s but have only been back once or twice since. I realize I missed a lot. The mountain is nearly double the size of my first time here. Even a novice (or senior skier like me) can — on a clear day — ride to the top of the Panoramic Lift (nearly 12,000 feet) and ski or snow board down a well-groomed run to the base (at about 9,000 feet).

Winter Park is also home to one of the largest Adaptive Ski Programs in the country. Read more about that here.

After about four hours of skiing, lunch and an afternoon Bloody Mary, it was time to get back on the train for the ride back to Denver. The views coming down from the Continental Divide, in the early evening gloaming, were even more spectacular than in the morning. We saw a huge herd of Roosevelt Elk in the distance in the Denver foothills, along with the craggy outcroppings of the Flatirons. Then in an instant — an opening to an amazing view of the endless stretch of Great Plains to the east under a full moon.

Thanks Winter Park Express. We’ll do this again soon!