The Disney guides make all the difference 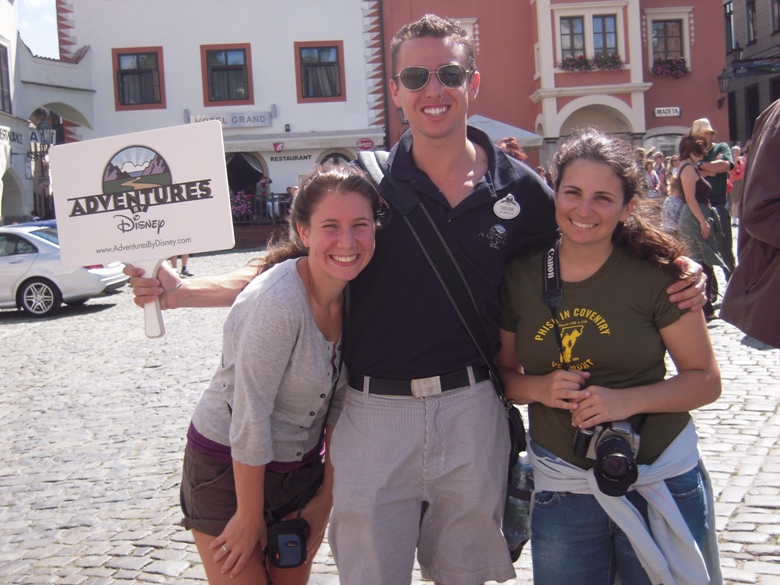 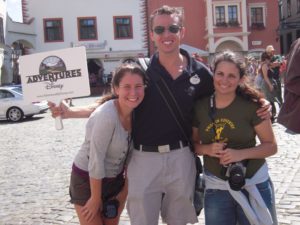 Haley and Mel with our Disney guide

AUGUST 5 — No matter how interesting the places, how scenic the terrain, touring is exhausting — especially with kids.

That’s why the parents in our group so appreciate our Adventures by Disney guides who are always there to offer a bottle of water, a snack, even an activity or movie on the bus to keep the kids amused.

They’ve even scoped out the best places to take photos with the castle/church/city in the background and will snap as many as you like of your family. They will do anything in their power to make your experience stress free-down to carrying wipes for the kid s to clean their hands, sewing kits and even spot remover.

Each child has also received an activity book especially made for this trip with picture matches (which castles are the same?) crossword puzzles, weird facts (Prague Castle is the biggest ancient castle in the world!), hidden picture puzzles and more. That the little book is exclusive to this trip with games and puzzles about the places we’re visiting is yet another example of Disney’s attention to detail.

We left Salzburg early in the morning on our way to Prague. On the way, we watch Narnia, which we learn, was filmed in Bohemia. After about three hours in the bus — none of us minded being off our feet, we stop at Czesky Krumlov. We’re in the Czech Republic (no passport check necessary these days). Czesky Krumlov is a Unesco World Heritage site in Bohemia — an amazingly intact medieval town with what else but another castle! Walking the narrow cobblestoned streets, you can’t help but imagine what life must have been like in the 16th century. Part of the reason this castle was built, our guide Romana Zikova explains was to protect the trade route between Salzburg and Prague. The forests were very dangerous, she explained.

We climb to the top of the castle spire and are treated to a spectacular view of the white buildings with their distinctive red roofs. We eat lunch at outdoor picnic tables, feasting on gigantic wursts served with rye bread. Tiny shops line the streets, several selling marionettes. We watch kayakers on Vltava River and others lingering over lunch at restaurants that line the river bank and wish we had more time.

But we’ve got to push on to Prague, still a three-hour drive. When we arrive, at the Marriott Prague, our guides take care of all the details-from checking us in to making sure our luggage is sent to our rooms to arranging dinner at the hotel. They show a film (Disney of course) afterward for the kids complete with popcorn.

It’s easy to see why some families already are talking about where they’d like to travel next with Disney. “It’s all about the kids,” says our guide Alex Kemper. “They learn from each other.” Parents too, I think.