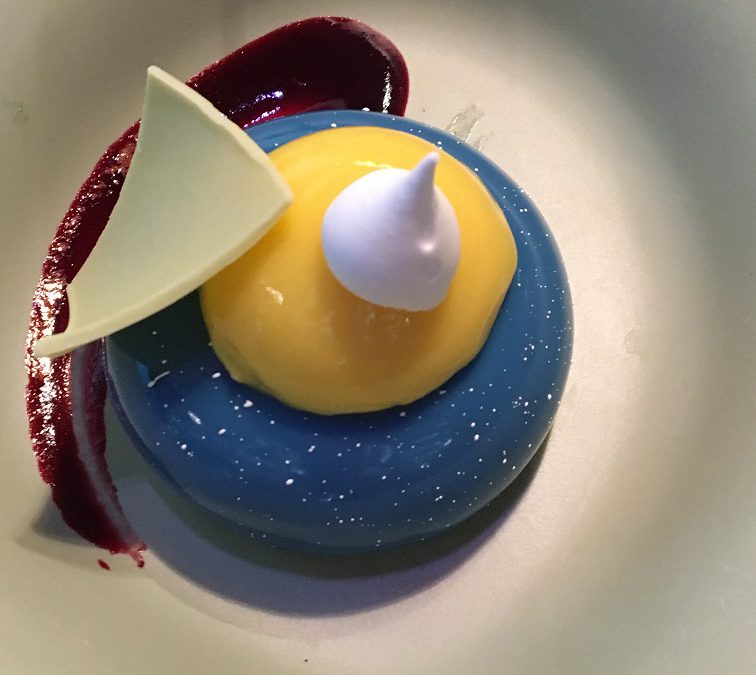 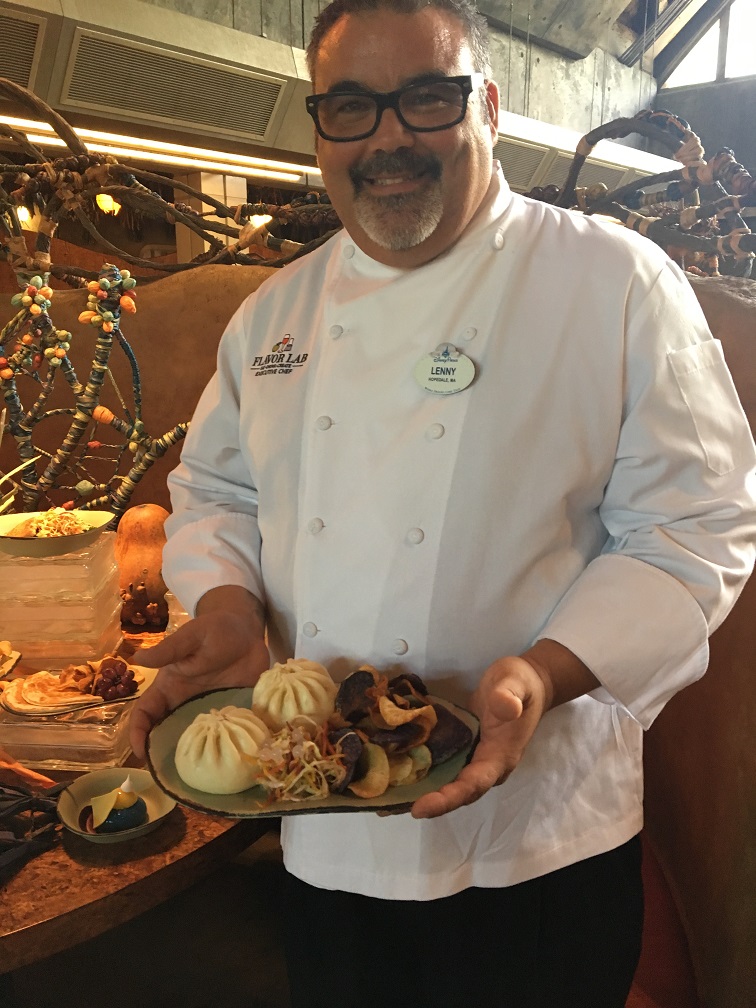 Maybe you’d prefer green beer. Welcome to Pandora-The World of Avatar at Walt Disney World’s Animal Kingdom that is set to open May 27. The food is a big part of the experience, says Lenny George, the executive chef in Disney’s concept department.

“We are telling the food story of Pandora,” he explained—a story that has been three years in the making. (Pandora-The World of Avatar has been in the planning stages for the past five years.) 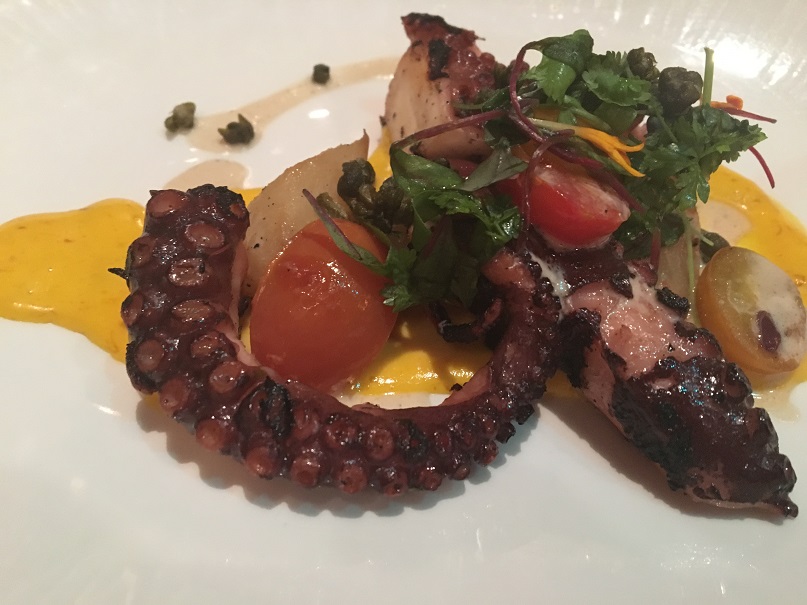 Grilled Octopus is the most popular appetizer at Tiffins

Along with a small group of media, I got a sneak peek recently, including lunch  at Satu’li Canteen and dinner at Animal Kingdom’s upscale Tiffin’s.

Satu’li Canteen, once a base set up on Pandora by the Resources Development Administration in the AVATAR film, now generations later is operated by the Alpha Centauri Expeditions tour company with Na’vi items on the walls and ceilings. The best part (besides the food, which I’ll get to in a minute) is that guests can order ahead on their Disney app and when they arrive, their order will be completed in a few minutes—no waiting on long lines with hungry, cranky kids.

There are no chicken fingers or mac and cheese; no fries. The only burgers are a burger like mixture served in a “pod,” a steamed Bao dough bun. In the extensive testing, George said, it turned out that kids would eat many things their parents insisted they would never touch.

Kids and parents should like that they can customize their meal, starting with a base (quinoa salad, red and sweet potato hash, rice or romaine and kale salad.  They choose the protein—chicken, beef, fish or fried tofu—and the sauce (chimichurri, black bean vinaigrette or herb dressing –  “Kids want to have what’s on the parents plate,” he said.  But if they don’t, there is a cheese quesadilla or a hotdog wrapped in dough. Kids will also like that they can order a blend of tropical juices in a souvenir cup with a removable pan flute. 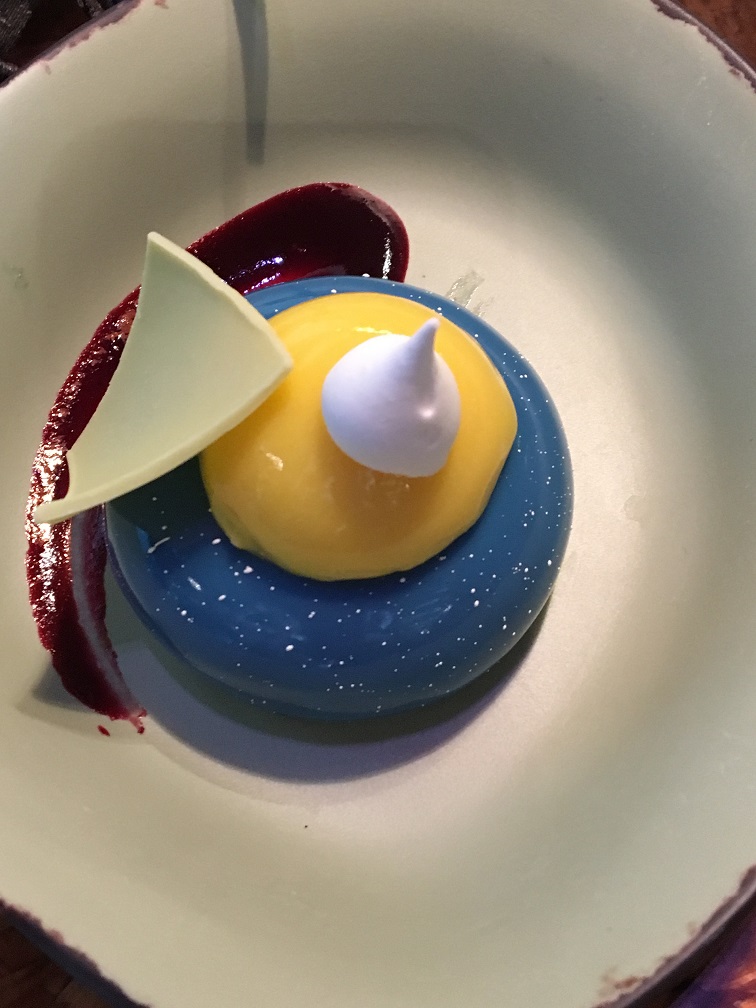 There’s a molded blueberry cheesecake for desert (this is the home of the blue people, after all) and a chocolate cake as well.

The flavors are familiar- but different—as you would find in an exotic locale or presumably another planet.  “We are super excited,” said Stefan Riemer, the Executive Pastry Chef, Concept Development.

George suggests this may be the restaurant offering the healthiest food yet in the parks with less protein and more grains and vegetables.

“Absolutely people are more interested In Park food,” said George, noting that the high-end Tiffins which opened a year ago in Animal Kingdom is very popular, showcasing dishes from countries where the Imagineers went when designing the park—besides Africa and Asia, Canada and Mexico.

At Tiffins in fact, the most popular appetizer is marinated grilled octopus. There’s also lobster-popcorn Thai Curry soup and a bread service that included black-eyed pea hummus–not exactly standard park fare. I loved the whole-fried sustainable fish with fermented black bean sauce. There was also a pan-seared duck breast with a truffle reduction and a roasted vegetable curry.   The kids can order black-eyed pea fritters, grilled chicken or pan-seared fish or beef as well as pasta.

Whether guests like the food, George said, has a huge influence on whether they’ll return.