The Force Awakens ahead of the movie at Disneyland 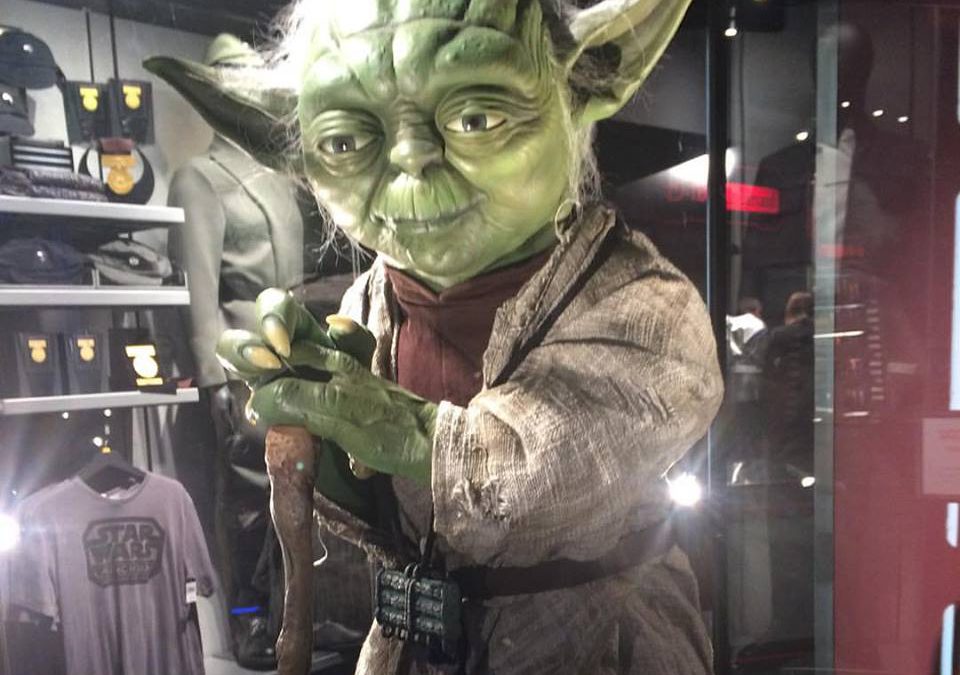 There also will be Star Wars  Day at Sea, starting next year on Disney Cruise Line, complete with the heroes and villians and a Star Wars-themed deck party, among other activities.  Next month, Walt Disney World will debut new Star Wars experiences at Disney’s Hollywood Studios,  including  Star Tours-The Adventures Continue with many random story twists so you’ll never know where in the universe you’ll travel or who you might meet along the way.

I’ve never seen such a coordinated merchandise-theme park-film effort.  When Frozen proved such a megahit, Disney was caught by surprise at the demand for merchandise. That won’t happen this time.

This summer, Walt Disney Company Chairman and CEO Bob Iger announced that Star Wars themed lands will be coming to Disneyland and Disney’s Hollywood Studios with groundbreaking next year.   The 14-acres land in each park will be the largest single-themed land expansion to date.

Here at Disneyland  in Tomorrowland,  the adventure started  Nov. 16, though Disney officials won’t say how long this Season of the Force will last.  At the  Star Wars Launch Bay. First Order storm troopers are on a mission: Find the Resistance members!   I meet Darth Vader who says some of my questions are “inappropriate,” but poses for a photo with me and asks whether I’m a spy;   Had I chosen the other route, I could have met Chewbacca. You have your pick of whether to join The Resistance or the Dark Side.

And for fans all varieties of props (check out Luke’s lightsaber and custom merchandise you can only get here—everything from a mug to a purse to  your own custom-designed I-phone case.

Take a picture at the sabacc table, which fans know is the popular card game played throughout the galaxy.

There is a new themed Star Wars area in Disney’s Oceaneer Club aboard the Disney Dream  where kids can “pilot” a space vehicle through the galaxy and complete Star-Wars themed games and crafts.

I climbed aboard Starspeeder 1000 and blasted off—to see scenes from the new movie and rode s Hyperspace Mountain, straight into a Starfighter Battle.   Expect long lines and FastPass to run out early in the day!

Scott Trowbridge, the Disney creative executive who has been overseeing the Star Wars experiences globally, noted that Seasons of the Force will be a celebration of all things Star Wars” with something for all ages—including “kids of an advanced age.”

“This is the best place to be a Star Wars fan,” declared Brent Strong, the Disney Creative Director for Seasons of the Force.  “To see the movies and then have it brought to life” with everything from rides, character experiences, foods, exhibits.

For those not up on their Star Wars, the Tomorrowland Theater now shows clips from the first six Star Wars films along with a sneak peak of the upcoming “The Force Awakens.”

Video game aficionados will get a special code for Disney Infinity 3.0 with park-exclusive Toy Box levels they can play at home on their Star Wars games.

Try a Darth by Chocolate desert after a First Order burger on a dark bun at the Galactic Grill; choose a special drink with a light-up Millennium Falcon or Death Star. How about a Blue corn Darth Tamale for breakfast? It was pretty tasty! Kids can order a Jawa turkey sandwich or a Force Power Pack with yogurt, carrots and more.

Do you have the stuff to become a Jedi? You can find out at Jedi Training: Trials of the Temple with a villain from the Disney XD Star Wars Rebels TV series.

But for Star Wars fans, there’s just one place to be.  Another Darth by Chocolate please — after another ride on Hyperspace Mountain.