The Fresh Air Fund needs help, get it from the Cayman Islands 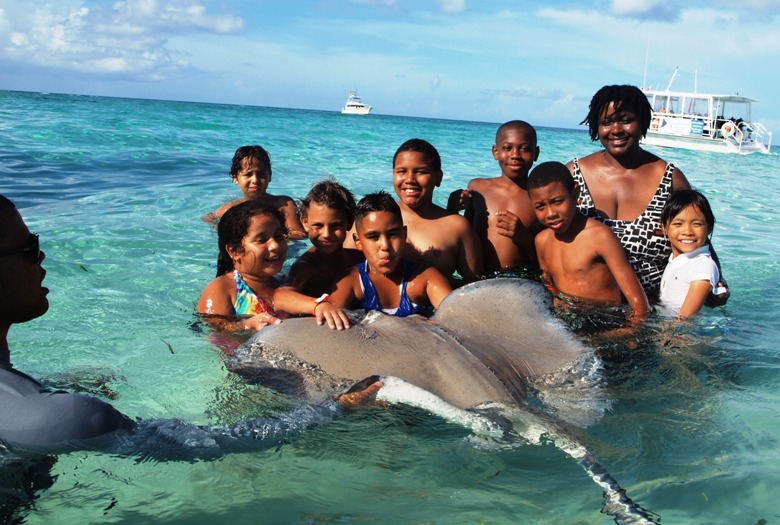 No one 10-year-old Romeoh Boscana knows in his Bronx neighborhood even knows where the Cayman Islands are.

But Romeoh is heading for his second Caribbean vacation in as many summers July 25 and is looking forward to repeating his feat of kissing a stingray (not scary,  but kind of crazy, he reported) at Stingray City,  swimming, snorkeling, touring a turtle farm, seeing the endangered Blue Iguanas, horseback riding   and maybe even visiting the Cayman’s famous big skate park.

“I’m a little jealous,” said his dad Heriberto Boscana.   That’s because Romeoh isn’t going with his family but with a group of 10 youngsters being sent by the Fresh Air Fund to stay with Caymanian families. Seven Caymanian children will come to the United States to go to Fresh Air Fund camps and visit the Big Apple. This is all thanks to a unique and successful partnership now in its fifth year between the Fresh Air Fund, the Cayman Islands Department of Tourism and CaymanAirways. Fresh Air Fund representatives have traveled to the Cayman Islands to interview the prospective hosts, just as they do in the United States, and will travel with the children.

With the Fresh Air Fund  reporting that  700 needy youngsters still are without a place to go this summer,  I can’t help but wonder why other islands and airlines haven’t stepped up to help.

Since 1877, more than 1.7 million of New York City’s neediest kids have been sent out of the city’s five boroughs to stay with host families (including mine) or to attend Fresh Air Fund  summer camps in Fishkill, New York—close to 10,000 kids last summer.   Kids as young as six are sent to stay with host families for a week or two in 13 Northeastern states as far away as Virginia and even into Canada.  Many children return to the same families summer after summer and   lives on both sides are often changed for the better as a result.

“This has been such a good thing for him,” said Romeoh’s dad, explaining that because he is unemployed, he couldn’t provide his children such an opportunity himself.  “He has more confidence and is more responsible and really enjoyed himself.” The best part, Boscano added, was getting   Romeoh out of a neighborhood “that isn’t that great” and giving him the chance to “see there are good people in other places. He’ll learn from them.”

His host parents in the Cayman Islands, for their part, were able to show their two kids “they don’t have it as rough as they think,” said Allison Lovinggood-Jackson, whose family is hosting Romeoh for the second summer.  “We thought it would be an awesome opportunity to try and make a difference in another kid’s life…We wanted him back to continue our bond.”

Fresh Air Fund Executive Director Jenny Morgenthau observes that host families often say they get more out of the experience than the children they host. She believes the dire need this summer— worse than past years–is a combination of continuing fallout from the economy–fewer families stepping forward to host–and the Fresh Air Fund identifying more needy children from new immigrant populations. The group going to the Caymans, for example, includes a boy whose family is from Ecuador and a girl whose parents emigrated from Korea.

Eight-year-old Sarah Jun insists she’s not at all nervous about heading off to the Cayman Islands from Queens without her parents. There’s just one problem: “I hate sand,” the eight-year-old said   giggling.

Blanca Moro, whose 10-year-old son Jeff is also heading to the Cayman Islands isn’t nervous either “because of all the stories he told me about Fresh Air Camp-he loved t!” she said through a Spanish interpreter.

Jeff, for his part, who is going to stay with a scuba instructor (he had no idea what that was) is trying to wrap his head around what it must be like to live in a place where it is always warm. “Awesome,’ he decided.  He can’t wait.

“It is important for people to know it doesn’t have to cost any money to host a child,” the Fresh Air Fund’s Morgenthau says. “Just playing baseball in a backyard where it’s safe and being out of the city is a lot for these kids.  And it isn’t too late for this summer.”