The Galapagos Islands — not cheap, not luxurious, but oh the wildlife and the memories! 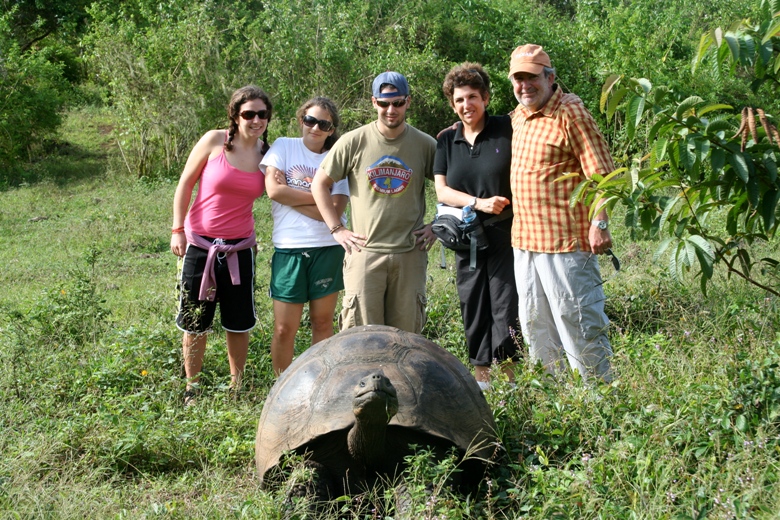 The teen stomped around squawking. His mom wasn’t home and his dad gave up trying to help.

Could be any household where homework is lost in cyberspace or that favorite shirt is dirty except  we’re not talking about humans here, but rather birds — a juvenile Nazca Booby a few feet away from me on an island in the Galapagos Islands that is home to more than half a million birds.

The bay we’re anchored in — Darwin Bay at Tower Island (also known as Genovesa Island) — is in fact a caldera formed by an ancient volcano, and we walk around looking at more birds than I’ve ever seen in one place: red-footed boobies, blue-footed boobies, gulls and frigates, which ignore us just like teens often do. We hike up steep steps to the rim of the caldera and watch the Nazca boobies’ mating dance — the male whistles to try to attract a female.

All week, as we cruise the Galapagos Islands off the coast of Ecuador, we joke about the parallels between the amazing creatures we encounter here and human family behavior.

We pose with giant tortoises that ignore our presence, and we try not to disturb the marine iguanas sunning themselves on the rocks. Sea lions swim circles around us in the water. We hike over black lava fields and snorkel with sea turtles and stingrays. I feel like we’ve stumbled into an episode of “Nova.”

This wouldn’t be everyone’s first choice for an expensive vacation. There are no beach chairs or bars on these protected beaches, where tourists may only venture with a guide. But this is an adventure we’ll never forget, starting with those sea lions we spotted on San Cristobal Island, snoozing on rowboats as if they owned the place.

Along with three other families, we’d signed on for a weeklong cruise organized by Seattle-based Wildland Adventures. Many American companies now are offering family-oriented departures to the Galapagos Islands including Abercrombie&Kent , Thomson Family Adventures , Tauck Bridges , Austin-Lehman Adventures  and  Backroads that are attracting adventure-loving families, including multigenerational groups led by active and presumably well-heeled grandparents footing the bill.  On such trips, you are guaranteed a kid-centric itinerary, kid-friendly guides and most important, other kids.

Our home for the week was an 83-foot boat called Flamingo 1, operated by Ecoventura that was comfortable but certainly not luxurious. There are less than 100  boats in the Galapagos Islands, from a 100-passenger cruise ship to small boats that sleep four or six people. We can’t help but wonder what it must have been like when Charles Darwin sailed here on the HMS Beagle.  Ours sleeps  just 20 passengers and a crew of 11, including two experienced naturalists, Harry Jimenez and Orlando Romero, who make every excursion an adventure — even for the 8-year-old twin boys on board. The Captain, himself a father of five, invites a different family to join him for dinner each night.

We’re a varied group ranging to my family (my oldest had just graduated from college when we did that trip and my youngest was in high school) to the Washington, DC family with the young twin boys here at the behest of a grandfather who had wanted to come but wasn’t physically able to a divorced Kentucky engineer traveling with adult kids.

They try to take an exotic trip every year, he said. “I’d rather leave them memories than money,” he joked.

Many families we meet are certainly hoping for those once-in-a-lifetime travel memories here in these remote islands off the coast of Ecuador, where the wildlife (especially the giant tortoises) inspired Charles Darwin’s work.  Where else can you snorkel with sea lions or watch a sea lion nurse her pup?  No wonder the Galapagos Islands are at the top of many families’ travel bucket lists.

And they certainly should get what they pay so dearly for. The beach where we’d stopped to swim and snorkel one day is full of sea lions — mamas and their nursing pups, frisky adolescents, fathers marking their territory. Every day is a different island and a different adventure. We see Sally Lightfoot crabs, bright red against the black lava rocks; great blue herons; penguins (yes, there is a warm-water species here); and even a short-eared owl, which is small and is apparently the only owl on the planet to hunt food during the day (no predators for the owls to worry about). Frigates hitch a ride on the mast of our boat, much to the kids’ delight.

Before dinner each night, the naturalists tell us what we’ll do the following day. Important clothing details — hiking shoes vs. flip-flops, shorts vs. swimsuits — are discussed. It’s nice to leave all the planning (and cooking) to others.  All we have to do is keep track of our own snorkel gear and wetsuits (provided by the boat) and our beach towels. That’s not as easy as it sounds with the gear in identical mesh bags.

But even in such a spectacular place,  kids get hot and tired, siblings bicker, teens want to get away from their parents, the boat rocks too much some nights, and the food gets tiresome. And on a small boat like this, everyone must make an effort to get along. It’s not as if you can go elsewhere and get away from anyone, whether your own family or others on board.

There’s no entertainment except that which we supply ourselves.  When we’re not hiking, snorkeling or exploring, we congregate on the top deck with cushioned chaise lounges, shaded from the sun, to read, play cards or take a snooze — just like the sea lions.

“Remember you’re in paradise,” the naturalists remind us.

I wonder if the sea lion pups ever whine in paradise.