The Luminous History of the National Christmas Tree Lighting Event 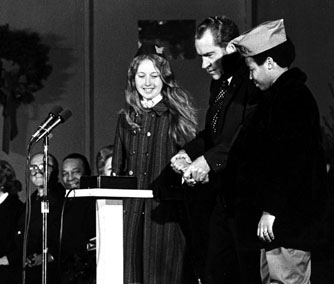 President Calvin Coolidge accomplished many things during his time in the White House including being the first president to illuminate America’s first “national tree” on Christmas Eve 1923. Lucretia Walker Hardy, then acting director at the D.C. Community Center Department, petitioned to have a national Christmas celebration by sending a letter to President Coolidge’s secretary. The letter included a request to have a Christmas tree on the White House grounds. When her request was approved, Hardy began to make plans—the first being to find a tree that was “large and thoroughly representative” of the occasion.

The first national tree, a 48-foot Balsam Fir, was a gift from Middlebury College in Vermont, Coolidge’s home state. The tree was chopped down and relocated to the Ellipse where it stayed throughout the holiday season. Approximately 2,500 red, white, and green electric bulbs donated by the Electric League of Washington decorated the tree. Performers at the first tree lighting included the Ephiphany Church Choir, the U.S. Marine Band quartette, and the entire U.S. Marine Band finished with a one-hour concert.

A 35-foot Norway Spruce from New York was the next national tree and also the first of a long line of living trees. Since the Ellipse was used for many events throughout the year, the lighting ceremony was moved to Sherman Plaza, a smaller more isolated space that seemed more appropriate for a living tree. Coolidge used a switch to light the tree, the first and only time in the history of tree lighting ceremonies, that a switch was used. The event was held at Sherman Plaza for nine more years until its relocation to Lafayette Park. This tree sustained heavy damage by the lights and decoration was replaced in May of 1929 with another Norway Spruce.

A new lighting system, which included using a scaffolding instead of a ladder, lighter trim, and bulbs with smaller wattage, was introduced in 1929. This was the first year that the tree was decorated with lights and ornaments. Safer systems would be introduced throughout the years in order to protect the living trees. To learn more about the history of the National Christmas Tree, visit www.thenationaltree.org. Or tweet your questions and strike up a conversation with the tree at @thenationaltree.

·         The first singing tree happened during the 1932 holiday season. Speakers were concealed within the tree’s boughs and connected to a Victrola, which played Christmas carols. The songs were a hit and the tradition continues to this day.

·         As the event grew in popularity, so did thefts and vandalism. In 1936, a fence was installed to prevent thieves from stealing ornaments.

·         The 1941 celebration was the first lighting that occurred within White House grounds under President Roosevelt’s urging that the public “come into [his] yard.”

·         Because of wartime conditions, no new ornaments were purchased for the 1942 tree. Also, the tree was not lit for security reasons.

·         Presidents have not always lit the tree onsite. President Truman once “lit” the tree with a telegraph key from his home in Missouri. A representative onsite threw the switch that provided the electricity.

·         In 1962, President John Kennedy veered off the pre-determined path to shake hands with the public. It was the only time the President Kennedy presided over the lighting.

·         The 1963 celebration was delayed four days to accommodate the 30-day national mourning period after President Kennedy’s assassination. President Johnson said during the ceremony, “While our spirit cannot be light, our hearts need not be heavy.”

·         The first time a President was not present during the lighting was in 1981 when President Reagan lit the tree remotely in the East Room of the White House following an assassination attempt.

·         Screech, the lovable owl mascot for the Washington Nationals, made his first tree lighting appearance in 2005.

·         The 2007 celebration was the most energy-efficient due to the use of LEDs—light emitting diodes.