The many ways to visit the Grandest of Canyons 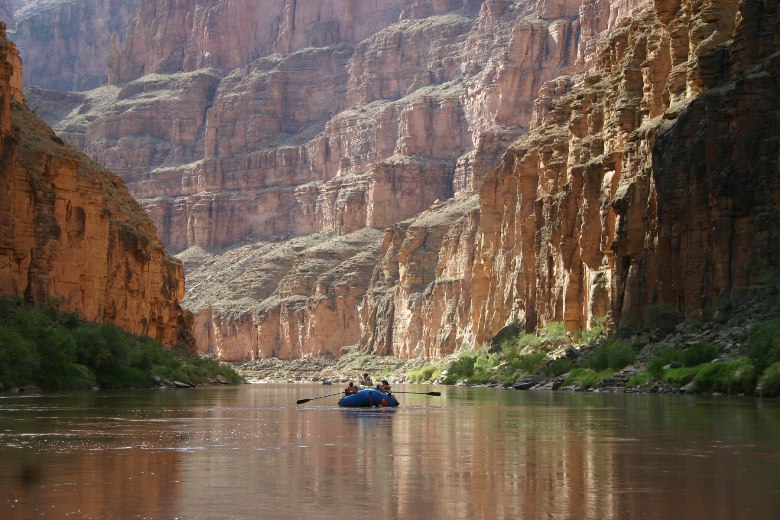 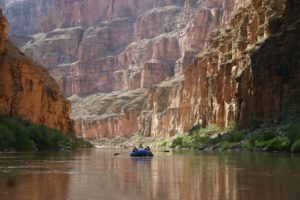 Rafting in the Grand Canyon

Even the kids are impressed. How could they not be, staring down into the most famous hole in the ground? The Grand Canyon! It’s a mile deep with 10 miles separating the South Rim where we were from the North Rim, 215 miles apart by road.

The Grand Canyon, set aside as a national monument by President Theodore Roosevelt in 1908, became a national park in 1919. Today, it remains one of the most visited parks, drawing more than 4.3 million visitors a year. Families from around the world come here to experience what is widely considered one of the great wonders of the world. Like I said, wow!

I was here in my 20s hiking down to take a river-rafting trip on the Colorado, an adventure I hope to repeat some day. I returned when my kids were young with my mom — her first trip — and visited again with my cousins Jayme and Mike Sitzman, 6-year-old Ethan and 4-year-old Hannah. The thing about the Grand Canyon and the other national parks is that there are ways to experience it whatever your age and, indeed, we encountered many seniors with canes and those in wheelchairs all having a great time.

National Park Week is April 16 through 24 (www.nps.gov/npweek/index.htm) and there is no better time (admission is free!) to explore one of our 394 national parks. This year’s focus, “Healthy Parks, Healthy People,” highlights the connection between human and environmental health and the vital role America’s national parks play in both.

If you can’t get out there this week — Junior Ranger Day is April 23 — think about a trip later this spring or summer. Getting outside is good for you and the kids. First Lady Michelle Obama certainly thinks so. Let’s Move Outside Junior Ranger (http://www.nps.gov/aboutus/letsmove.htm) — part of her nationwide Let’s Move campaign to end childhood obesity — encourages kids and their families to engage in outdoor activity that gets hearts pumping and bodies moving. (FYI: There is a new free Oh, Ranger! ParkFinder mobile app, available in the iTunes app store that helps find activities at more than 6,000 national parks, state parks and public lands nationwide: http://www.ohranger.com/app/parkfinder)

If you sign on for organized family multi-day trips from companies like Austin Lehman (www.austinlehman.com), REI Adventures (www.rei.com/adventures), Backroads (www.backroads.com), Tauck (www.tauck.com) and even the Sierra Club (www.sierraclub.org/outings), you can leave the planning to others and see parts of some iconic parks most tourists miss, led by guides attuned to the kids. While these trips can be pricey, they are increasingly popular for families who are looking for unique (relatively) stress-free experiences.

“We have seen interest in all of our national park vacations grow at an astounding rate,” Said Dan Austin, founding director of Austin Lehman, which just announced three additional national parks family trips this summer.

At the Grand Canyon, the kids are interested in everything — the different hues of the rocks (red, while, brown, green) and the fact that different colors signify the age of the rocks dating back as much as 2 billion years! Of course, they are interested in souvenirs before the day is out, so we’ve bought key chains with their names on them, storybooks about animals who poop in the park and pins to put on their stuffed animals.

The best souvenir is the Junior Ranger booklet that encourages them to explore the canyon in age-appropriate ways, drawing pictures, answering questions, keeping track of the birds and animals they’ve seen.

There are many kid-friendly ranger programs to choose from too (a fossil walk or campfire talk, perhaps?) We walked with the kids along the rim trail, taking in the amazing vistas (the visibility is more than 100 miles). The kids don’t get bored, though having some snacks and water along helped and the hike along pretty level terrain wasn’t arduous. We counted the dogs we met (eight) and the “timeline” imbedded in the trail realizing just how far back the canyon walls go. It’s a sobering thought.

We reminded the kids that this wasn’t a theme park. They had to stay on the trail and be careful. They didn’t want to get too close to the edge. “Too scary,” Hannah declared.

We walked almost two miles to the Yavapai Point. By then it was getting late and the kids were getting tired and chilly. We wanted them to end the day happy so we hopped the free shuttle back to Maswick Lodge to spend the night. Along the way, even the shuttle driver entertained the kids with riddles.

We brought their Junior Ranger books to dinner — they must use their detective skills to spot (but not collect) everything from a ranger to a raven to a pinecone to a California condor (one of the largest and rarest birds in North America). It turns out that fossils reveal these majestic creatures have lived in this area for thousands of years. Now, with the combined efforts of state and national government agencies, the California condor population is being re-established with additional nesting and more captive raised birds being released.

I like that the Junior Ranger program encourages kids to look at the park from their perspective. Many ancient people left behind pictures in the rocks of the Grand Canyon, one activity says. Draw your own pictograph and describe what it means (of course, the kids are also told never to write on real works in national parks).

There is even a green lesson. Kids are encouraged to clean up an area at home, talk about the Grand Canyon at school and learn about plants, animals, rocks and history. (Check out www.nps.gov/webrangers, or follow the National Park Service on Twitter or Facebook.)

Geology, history, biology … how much more can one place teach kids — without them even realizing they are learning?

We finished our day with dinner at the historic El Tovar Hotel (www.grandcanyonlodges.com). The dining room was filled with families and kids who could choose from either an inexpensive traditional kids menu (mac and cheese, five chicken strips) or half portions from the adult menu. We sat looking out at the changing colors of the Canyon as the sun set.

“The rocks are pink!” Hannah said.

We dined on steak and sipped wine while the kids worked diligently and happily on their books.

Is there such a thing as the perfect end to a perfect vacation day? We’ve come close. Thanks, President Roosevelt.

(For more on Eileen’s trips to the Grand Canyon, read her Travel Diaries)