The Obamas and mother daughter trips 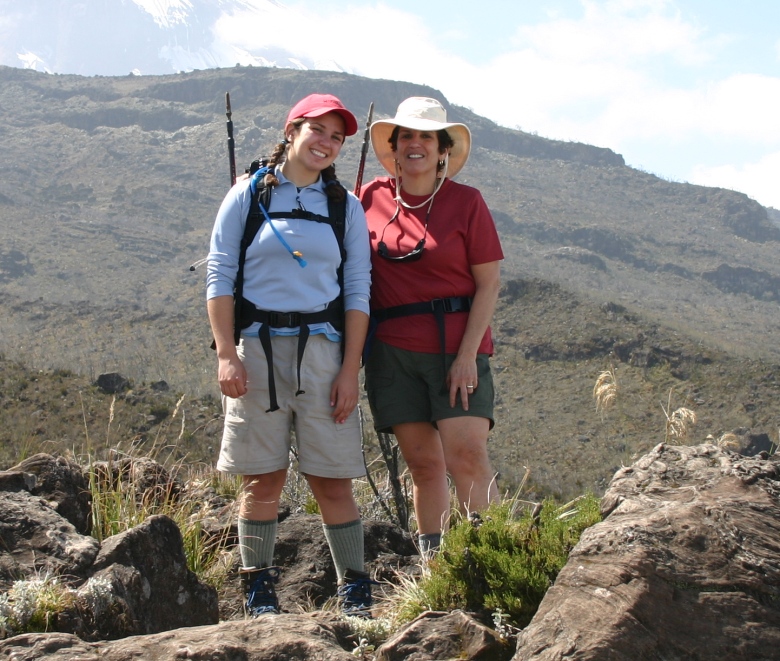 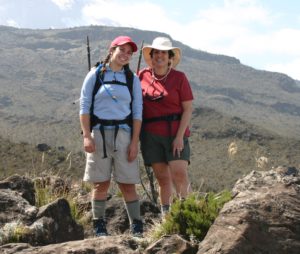 Reggie and Eileen on Mt. Kilimanjaro 2004

I’m talking about her mother-daughter trip to Spain this week with Sasha while Malia is at sleep away camp.

There will be a little work on the trip—in this case an official visit to Spanish King Juan Carlos and Queen Sophia.  But there will also be plenty of friends along for the fun. Mrs. Obama reportedly has reserved some 30 rooms for their group including friends and bodyguards at a five-star hotel near Marabella.

Good for you, Michelle! It’s tough these days to coordinate school and work schedules even for those not running the Free World.  Why shouldn’t she get away with her daughter for some fun in the sun if the President can’t?

Wherever I go these days — aboard the Disney Magic in Europe, on college tours, to spas like Canyon Ranch (www.canyonranch.com), which offers good deals for teens, ski resorts, big cities, resort towns, volunteer service trips (www.i-to-i.com) and even far flung, once-in-a-lifetime destinations like Africa and the Galapagos Islands– I run into parents traveling alone with kids. Travel agents and adventure outfitters also report they’re booking more trips for solo parents and their kids.

I met Patricia Pasechnick sailing to some of the most romantic ports in Europe on a Disney Cruise with her mother-in-law and 13-year-old daughter while her husband stayed home.  “I travel with my daughter and without my husband at least three times a year,” said Pasechnick, a hairdresser from Teaneck, N.J.  “He’d rather go to the Jersey Shore.”

Sometimes a special occasion spurs a trip.  In 2004, I climbed Mount Kilimanjaro in Tanzania with my daughter, Reggie, to celebrate her high school graduation (www.familyadventures.com) and met other parents doing the same thing. When she graduated from college, we celebrated with a hiking trip along the Amalfi Coast that also included another mom-daughters group celebrating a graduation. (www.backroads.com)

My husband Andy, meanwhile, has taken each of our three kids to a memorable football weekend at the University of Texas, his alma mater. There have been father-son trips to spring training and father-daughter trips to Mount Washington in New Hampshire and Stratton Mountain Resort in Vermont (www.stratton.com), an easy drive from our home.   Later this summer, he and my son are going fishing in Canada.

Such trips allow a parent to focus on one child and their interests. I’m sure even the First Daughters bicker over what they want to do on vacation. And time with one child is totally different than time you spend as a family—even when you have Secret Service and friends along.

Every winter, Ellen Schwartzberg, an innkeeper, takes her teenage daughter, Joanne, from their New Paltz, N.Y., home to New York City for a few days of theater and museums, while her husband, Paul, heads west to ski with 12-year-old Marc. “The last time we joined the skiing with half of our family several years ago,” Schwartzberg said, “we realized, as we read by the fire waiting for them, that we could be at a Broadway show! This way, we spend the same amount of money. Everyone has an exciting trip and a lot to share when we reunite.”

I relish that one-on-one time where I only have to worry about one other person who, for the moment, has the same agenda — whether shopping for turquoise jewelry in Santa Fe, or making it to the top of Mount Kilimanjaro.

The key is to let the kids help plan where you’re going—whatever their ages– and what you’ll do when you get there, suggests David Fassler, a child and adolescent psychiatrist and a professor at the University of Vermont.

Whether you are going to someplace new or someplace you’ve been a dozen times, you’ll  see it through fresh eyes when you let the kids lead the way.