The rain stops in Bermuda 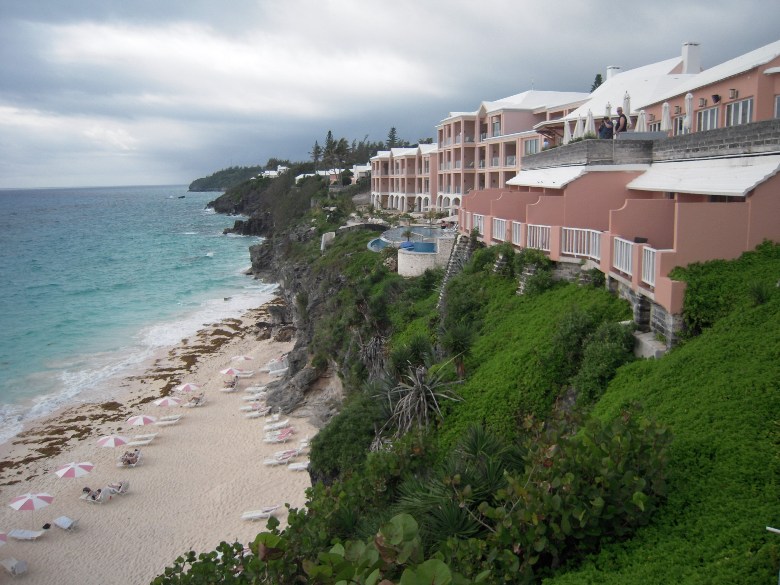 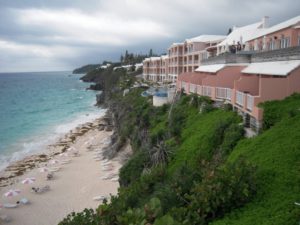 The Reefs Hotal in Bermuda

DAY 3—Bermuda!  And it’s not raining!

Not sunny, but not raining. Just 66,000 people live on this pristine island—actually a series of about 360 small coral island, which is part of the British Commonwealth. Yes, we see businessmen wearing Bermuda shorts, knee-high socks, and shirts and ties to work.  Hedges are manicured and lawns mowed. Houses are painted a rainbow of colors—bright orange, green and blue, pastel pinks and yellows. It makes you happy just to look at them.

The island is just 21 miles long—and 2.5 miles wide, but because of narrow winding roads, it seems to take a long time to get anywhere.  We’re just 570 miles southeast of Cape Hatteras, NC, which is why Bermuda has always been a popular getaway for Northeasterners for its water sports and, of course, golf.

In fact, the J-shaped island was first discovered by the British accidentally-in 1609 when Admiral George Somers, on his way to Virginia-was shipwrecked in a storm. He claimed the land for England and though some months later, their ships repaired, Somers continued to Virginia Settlers were sent and arrived here three years later.

Our taxi driver –- guide Ron Scraders, a lifelong Bermudian and grandfather, warns us off the mopeds we see tourists riding everywhere. His great niece, he tells us, was badly injured just the day before.  We urge the 20-somethings in our group to steer clear.

This trip was designed as an 85th birthday and family reunion for my second mom—the mother of my two closest friends who grew up two houses away from mine on Long Island.  I came along in part because my mom was too ill to travel.  There are 11 of us–there were supposed to be 12, but my friend’s husband died unexpectedly the week before the trip.  The family collectively decided to continue—to celebrate life, to grieve together.  So here we are careening around these roads, stopping to feed the fish at historic Somerset Bridge.  My friend the golfer learns there are nine courses here and some 12,000 boats we see bobbing in the water—sail boats, fishing boats, small row boats.

There are also some 400 wrecks, some dating back to the 15th century. I was looking forward to diving on one until an eye infection changed those plans. We stop at Gibbs Hill Lighthouse and then the quaint town of St. George, which was Bermuda’s first capital and now seems just a tourist haven with its small streets and pastel-painted buildings.

But there are lots of other options as well.  First stop: The Reefs (www.thereefs.com), a tony resort with just 65 rooms and suites and a tradition here since 1947.  David Dodwell, Jr., the director of rooms, and whose family owns the resort, shows us around the luxe property which now boasts spanking new Reefs Club fractional ownership and a new spa.  (You can rent these two and three-bedroom units at the moment.)

When the place opened, The Reefs had the traditional Bermudian roof-wetting celebration in which Black Bermuda Rum is used to christen the new structure.  Because all meals are part of the deal here, this is the kind of place that if you can afford it, you come to kick back, snooze on the beach, sit at the pool, a book in your lap, or build sand castles with your child.  Yes, this place is popular with upscale families, especially in summer, it seems and is more affordable in winter when it is low season here and many resorts close.

After lunch, overlooking the white-capped ocean waves, the small beach dotted with pink-striped umbrellas , we move on to a totally different kind of place– 9 Beaches (yes, it has nine albeit small beaches).  http://www.9beaches.com This is the kind of place where all you need is flip-flops, a bathing suit, and shorts. And snorkeling gear.  (It boasts the largest water sports shop on the island.)

You stay here in 84 private cabanas—some on stilts in the water–with balconies that are simply furnished and have canvas walls and solar panels, though there are AC and heating units. You can mix your own drink on the deck, grab a snack from the fridge, or use the resort-provided cell phone to order a pizza and some beer.  Kayak to a wreck or snorkel all afternoon, take out a Hobie Cat or a paddle boat. FYI- the resort is located on the furthermost western point of Bermuda (think Bermuda triangle) Also know that you are the closest to the sunsets “People shouldn’t come here just to get a cheap room” says the manager Robin Gilbert. “This appeals to those who have a bohemian streak, to people who are adventuresome.” He adds that September and October are perfect times for this place too because the weather is cooler (and the rates are lower, of course). There is bicycling, tennis, bocce ball, foosball, table tennis, croquet, and beach volleyball.

This seems a good bet for adventurous families too. There are no organized children’s clubs here, but they have the run of the place, and there is a playground “It’s been great for all of us,” reported Helena Gates, who was vacationing with her husband Peter and nearly five year old twins, Louis and Lucia.  I don’t think I could go back to a traditional hotel after this,” she said. “It’s quaint and comfortable and everyone has been very nice with the children.”

That’s exactly what you want here. We wait out a rain shower at the Dark and Stormy bar drinking—what else—but Bermuda’s signature drink, a Dark and Stormy, which is ginger beer topped with dark Bermudan rum. Yum!

Since our ship, Explorer of the Seas, is staying in port overnight we are in no rush to get back to the ship, a 10-minute cab ride away.  We decide to stay for dinner on the veranda eating seafood chowder, grouper, and snapper and the best sundae I’ve ever had with flambéed banana, dark rum, chocolate sauce.  The frogs and crickets are making evening music. We’re laughing—which is a good thing in this family this week.  Being here makes me realize we need to grab the good times when we can.