The real VIPs on the Norwegian Gem 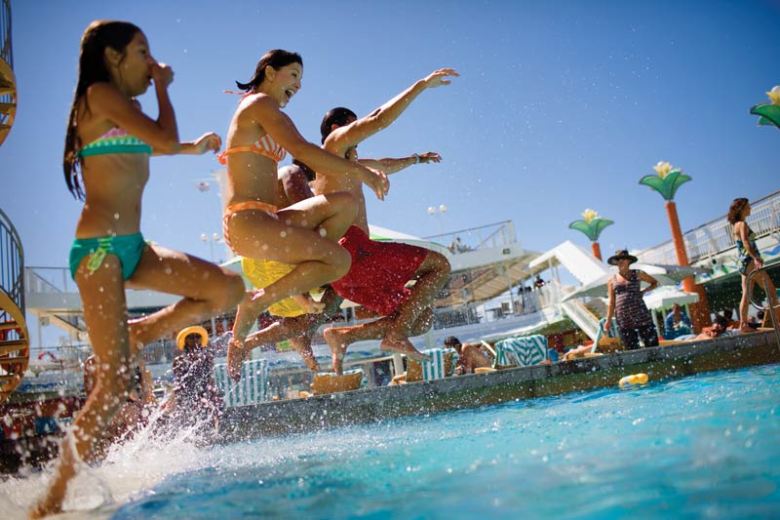 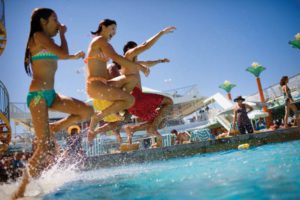 DAY SEVEN (March 6, 2009) — Sure there is a special lounge for VIPS on this ship and special “villas” with their own pool and garden courtyard. But the real VIPS aboard the Norwegian GEM (www.ncl.com) this week are busy on the jungle gym and practicing to be pirates in the NCL’s Kids Crew.

Memo to junior first time cruisers: “Go to the kids club the first day because you’ll meet lots of kids,” said Kathy Novzynski,10 and a cruise veteran with three sailings under her belt “A lot of kids don’t know that the activities are so fun,” adds Melora Cook, 9, who is from New Brunswick, Canada.

And you’ve got to be prepared for everything — unseasonably cold weather (bring a jacket! Even if you think it will be warm) and lots of waves.

But the chilly weather and choppy seas didn’t keep these kids from having a good time — not with chocolate fountains in the buffet, magic shows, stewards who fashion snakes and elephants out of towels and the chance to sample Atlantis’s water slides (really fun, Kathy said) and reach out and touch a Dolphin (they felt rubbery, declared Tyler Glatt,8) during shore excursions.

“I like everything on this cruise,” declared Melora Cook.

Still, the junior cruisers have some advice for the kids who will be cruising in the coming months — and for those running the cruise line as well. For example,, they love that the ship has it’s own kids café in the buffet, complete with TV where they can watch cartoons, but it needs to be bigger with more kinds of food. Don’t they know that kids like salad and fruit, not just mac and cheese and chicken fingers? And since the dining room and specialty restaurants (there are seven on board) “take too long” there should be more options at the buffet so it’s not always the same every day.

And what’s up with limiting Nintendo to the teens? Tweens like to play video games too.

Kids should make sure to look at the daily list of activities that is put in their stateroom every day so they know what’s going on — “And know to ask somebody with a name tag if you get lost and need help,” offered Melora.

Kids probably don’t realize either that the staff — the waiters, the stewards, the counselors are from more than 60 countries. “They are very friendly so ask them about their countries,” says Kathy.

Kids should also be prepared that staterooms tend to be smaller than hotel rooms, though the beds are very comfy, said Tyler Glat.

First time cruisers were surprised bo a lot of things. “I didn’t know there would be a waterslide and rock climbing wall on a ship,” said Avery Pearson, 9, a first time cruiser from northern California. They didn’t realize they’d have their pick of so many sports either — basketball, soccer, golf, tennis.

They also were surprised by the sheer number of people. There are after all some 2,400 passengers and 1,100 crew on this floating hotel.

Other kids were surprised by the bowling alley — and the sheer size of the ship: 965 feet long and more than 195 feet high! That’s why it’s a good idea to take a tour the first day, so you know where everything is, suggested Adreyanne Duguay, 10, who is also from Montreal and was being called on this week to translate for the counselors in the Kids Crew because there are so many French speaking Canadians (1,400, more than half of the passengers this week are Canadians).

And don’t be afraid to try new foods, adds Kathy Novzynski. “You can just take a little bit.” The good news is you can eat as much as you want whenever you want so if you try something and don’t like it, you can get something else — fruit, ice cream, a burger, a hot dog, pizza. Kids won’t go hungry, that’s for sure.

“My biggest surprise was that there were so many kids,” said Melora Clark. “And that was a good surprise.”

Today is our last day at sea and though the weather isn’t ideal for sunning by the pool or the water slides, there is plenty to do — including the unveiling of a huge (1,000 piece) Lego Mural. Every week, kids participating in the Kids Crew will get a chance to recreate one themselves.

There’s a bowling tournament, a basketball game agains the crew, Bingo complete with a giant jackpot) the Casino even a workshop bu the cast of Second City on Improv.

Gotta go. Don’t want to be late for Trivia.