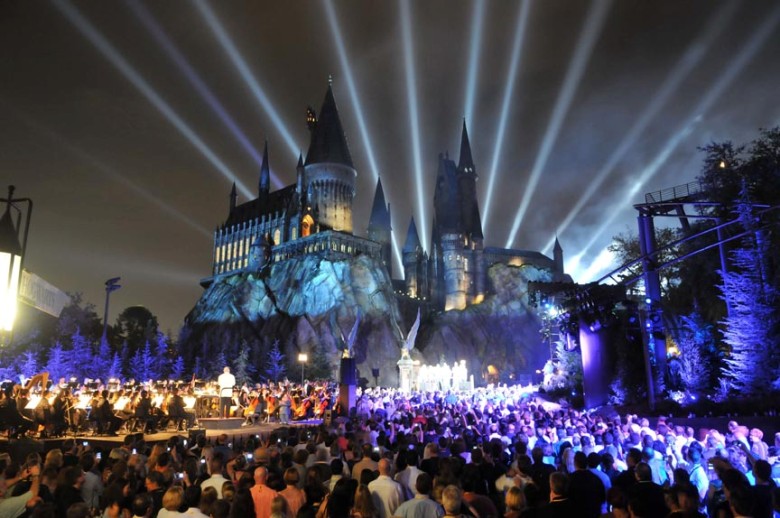 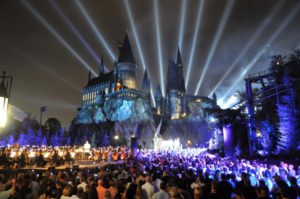 Grand opening of the Wizarding World of Harry Potter

No, I’m not talking about how you can feel the dragon’s breath as you soar over Hogsmeade with Harry Potter on his forbidden journey, eat exploding candy, ride on a dragon, drink frozen butter beer (tastes like cream soda with a shot of caramel) or have a Wandkeeper in his dusty shop direct you to just the right wand to perfect your wizarding skills.

No, I’m not talking about the amazing attention to detail that transports you to Hogsmeade, complete with the caged Monster Book of Monsters baring its teeth and toys like a Sneakoscope that will light up and whistle if someone untrustworthy is around.

I’m talking about the thousands of vacationing tweens, teens and young adults who, in an effort to beat the crowds, have rousted their parents out of bed before 7 a.m. since “The Wizarding World of Harry Potter” opened with much fanfare June 18 at Universal Orlando Resort (www.universalorlando.com ).

“They never get up this early without a lot of prodding,” laughed Cherie Schiano of Connecticut, who’s here with her 14-year-old daughter Emily and another mom-daughter duo. “Today, they were out of bed by 6 a.m. They’ve been talking about this and planning for six months.” Schiano acknowledges that she is not nearly as big a Harry Potter fan as her daughter but says, “It’s fun to see it with her.”

Thanks, Harry. Suddenly, young people, who wouldn’t spend much vacation time with their folks, much less get out of bed this early if they didn’t have to, think family vacations are fun again, especially when mom and dad or grandpa pay for the trip and pop for $100 wizarding robes (yes, despite the 90-degree Florida heat, fans traipsed around the park in the floor-length robes, wearing Hogwarts ties as belts) or $30 wands.

“I about fainted when I went into the castle. It was so cool,” said 20-year-old Rachel Mastalski, who arrived before 7 a.m. the other day — her second early morning (early admission is gratis with vacation packages at the three Universal resorts) with her family that includes two older siblings. And she thought it was worth every minute of lost sleep.

This is the generation, of course, that grew up with Harry Potter. They read the J.K. Rowling books with their parents, who were so excited they were reading that they waited in late-night lines for the latest release and then shepherded them and their friends to see the movies. (Some of the scenes from the two latest Harry Potter films were actually filmed here.) Gradually, parents became fans too.

For that reason, says Thierry Coup, the Universal executive who helped oversee “Wizarding World” and himself the dad of a 16-year-old, the World has evoked as much passion amongst the team as with the fans. “There was more passion about this than anything we’ve ever done,” he said. “We’ve all shared Harry Potter with our own children too.”

“I’ve read all the books twice,” said Earl Ward, retired after more than 30 years in the Army. He stood on line here at 7:30 a.m. with his two granddaughters after an 18-hour road trip from Dallas. “This is something we can all do together.”

That is as long as you can navigate the biggest theme park crowds I’ve ever seen. Gary Sain, president of the Orlando/Orange County Convention and Visitors Bureau, reports that already, “many of our global travel partners have shared double-digit increases in Orlando vacation inquiries and bookings.” (Check out www.visitorlando.com/deals  for the latest discounts.)

Stay at a Universal Orlando Resort and you get early admission and the perk of using your room key to bypass the lines at the Dragon Challenge and Flight of the Hippogriff family coaster, or any of the shops where the lines could stretch well over an hour, as well as to other parks attractions. (Check www.expedia.com  for discounted packages that can save even more when you book flights and theme park tickets altogether.)

If money isn’t a concern, opt for a VIP tour (http://bit.ly/bbdqHW ) at $150 a person, plus park admission, that will get you into the castle without waiting two hours, but it won’t get you into Ollivander’s Wand Shop, Honeydukes, the candy shop, the Owl Post or Dervish and Banges, the “magical supplies and equipment” shop, with its copy of the Monster Book of Monsters in a cage.

Throughout the day, people wait on line simply to get into the 20-acre Wizarding World area of the park and then wait additionally for everything else — from butter beer to the chance to pose with the conductor of the Hogwarts Express or to get into Three Broomsticks restaurant. “It’s exhausting,” acknowledged Sue Gauta, here with her kids from Naples, Fla. “We waited an hour to get into a shop to spend $150. It felt kind of dumb.” Of course, her 9-year-old nephew, Jake Waleri, thought the waits were worth it — especially for the butter beer. “It’s my new favorite drink,” he declared. “And you can’t get a wand like this other places!”

Some, though, simply gave up. “The kids didn’t want to wait that long so we haven’t done anything here,” said a dejected Melissa Branch, here with her family from Winston Salem, N.C. “I’m disappointed.”

Universal Spokesman Tom Schroeder suggests you see the rest of the park (Islands of Adventure) first and head to Hogsmeade later in the day when the crowds have thinned out. The park stays open until 10 p.m. throughout July.

After waiting an hour and being chosen from 25 people by the Wandkeeper to get fitted for her perfect wand (yes, music sounded, lights dimmed and wind rustled), 23-year-old Meghan Pahel said she didn’t have enough money to buy it. But that didn’t dim her enthusiasm a bit. “How can you not love this,” she said. “It’s like stepping into your childhood.”

(For more on Eileen’s visit to the Wizarding World of Harry Potter, read her Travel Diaries