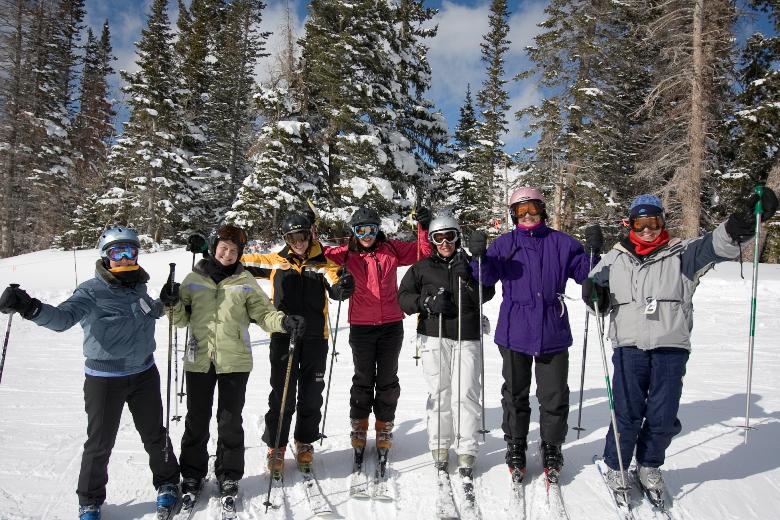 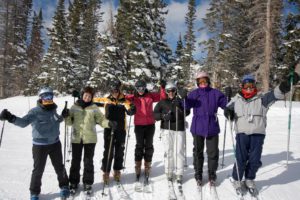 The Tucson grandmother was determined to get her groove back — on skis.

That’s why on this blustery day at The Canyons Resort in Park City, Utah, one of the largest ski resorts in the country, where more than a foot of snow would fall by the end of the day — the grandmother is out skiing for the first time in more than three years. Along with women from around the country, including me, and a sixty-something friend who encouraged her to come, she has enrolled in former Olympian and ski champion Holly Flanders’ clinic for women (http://thecanyons.com/ski_school_womens.html).

Flanders, now in her fifties and a mom of three, is a world-class athlete — an Olympian who, for a decade, racked up medals racing on the U.S. Ski Team. She started racing at age eight in New Hampshire and didn’t hang up her racing skis until her late 20s when she became the public face of Park City Mountain Resort.

In this group are college instructors and doctors, graphic designers, counselors, stay-at-home moms and full-time volunteers, who range in age from 26 to 65. They come from around the country — California and Connecticut, Arizona and Washington State, Canada and Utah. Only three of the 11 have participated in a clinic like this before.

The instructors also are middle-aged, multi-tasking moms juggling jobs, kids and other responsibilities. “This is a very supportive atmosphere,” says veteran instructor Maree Tomczyk,  herself the mom of two sons, who has been teaching this clinic since Holly started it some 14 years ago. “It’s very relaxed. Guys are much more competitive — it’s all about who gets down first or who takes the biggest jump.”

Today, you’ll find groups and women’s clinics like this at large and small resorts across the country from Stowe (www.stowe.com) and Stratton (www.stratton.com) in Vermont to Breckenridge (www.breckenridge.snow.com)  and Aspen (www.aspensnowmass.com) in Colorado to Snowbird (www.snowbird.com) in Utah to Mammoth Mountain (www.mammothmountain.com) in California and at Jackson Hole in Wyoming (www.jacksonhole.com). (For a national directory, visit www.outsideadventureguide.com/womens-ski-clinics  or www.skilikeawoman.com.)

Each program is a little different. There are clinics for snowboarders and skiers, for beginners and experts, with a focus on technique, conquering fear or new equipment testing. (Check the clinics run by expert Jeannie Thoren, www.jeanniethoren.com.) The clinics cost a few hundred dollars for a weekend, considerably more for longer sessions, including those organized by former ski champion Kim Reichhelm (www.skiwithkim.com).

“I see a lot of moms frustrated by skiing,” former ski champion Kim Reichhelm says. “They spend all their time taking care of the family and never get to enjoy themselves.”

The women tell me it’s money well spent because it gives them much needed time away from spouses, kids and work as well as challenging themselves physically.. And that feels good, they say. “This time away will help me return to the important job of mothering with new energy,” suggested one Seattle mom.

“There’s something else the coaches hope everyone goes home with — more confidence. “The result is to go back to your life and have more confidence in your everyday life,” Flanders explains. “You stand at the top of the hill and you aren’t sure you can do it, but you dive in and you do it. … If you can accomplish this challenge, you can overcome many other things.”

Flanders observes that many women seem to lose confidence as soon as they leave the groomed, blue terrain. “My goal is to help them to reach a higher level and when they do it, they enjoy it so much more.”

I can vouch for that. I’m knee deep in powder on an expert run surrounded by trees that make it tough to turn.  Flanders coaches me down, one turn at a time. I only fall once. Yahoo!

When I get to the bottom of the run, I feel terrific. I’m covered in snow. The others in the group all congratulate me.

I figure we have to grab these moments when we’ve overcome a challenge — on the ski hill and in life — and enjoy them for all they’re worth. They make up for all the times that don’t go as planned, for all of life’s disappointments.

There’s something to be said for conquering fear — especially on a mountain with spectacular vistas in every direction surrounded by such a supportive group. “I was willing to do things I wouldn’t at the beginning,” conceded another member of the group. Me too.

Certainly, the snow sports industry is trying to keep women like us on the slopes. Besides camps led and designed by some of the nation’s top instructors, resorts now offer other services that have special appeal to women — yoga classes, spa treatments and women-specific ski and snowboard rentals, observes Michael Berry, president of the National Ski Areas Association. Women, the NSAA notes, account for the majority of  beginners, but still don’t keep pace with men on the expert slopes.

Donna Carpenter, founder and director of Burton’s Women’s Initiatives, adds that Burton’s women’s products are not only developed by women for women but also marketed separately. Burton has opened several women’s learn-to-ride centers across the country, and continues to promote women-only snowboard camps.

“Just remember it you make steps forward and slide back,” Flanders told the group before we headed out into the snow. “Allow that to happen. It’s a natural progression just keep moving forward and it will come!”

Sounds a lot like life, if you ask me.