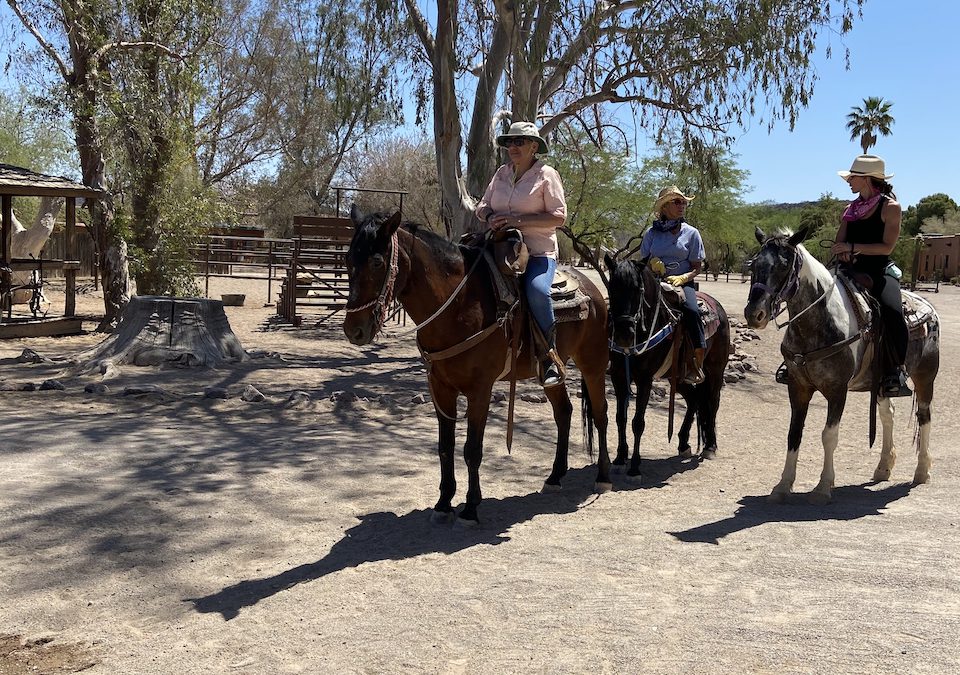 AZ Dude Ranch has been catering to families for decades

MARANA, AZ — So many choices! So many horses!

A horseback ride… archery… shooting… e-biking… rock climbing, whether you are a beginner or an expert on the mountains that surround the property.

And then there’s the pool. And the spa. And art classes and edible desert tours and…the list goes on.

If you thought a dude ranch was just about horses, think again—even a historic one like the White Stallion Ranch in Tucson, owned by the True family for more than 55 years. The ranch was originally built in the 1900s and began as a cattle ranch, becoming a guest ranch after World War II.

Today the ranch is on 3,000 acres adjacent to Saguaro National Park with 43 well-appointed casitas, a five bedroom house popular for family reunions, and plenty of activities for adults and kids alike to hone skills and learn new ones.

“We love this place,” said Essie Wu, who with her husband and two sons have been here five times during this Pandemic year.  They live in Tucson, she explained, and discovered it when searching for outdoor-oriented options nearby.

“I’m most excited about rock climbing,” said Liam Knight, 11, who is from Billings, Montana.

Two teens we met were riding horses for the first time; younger ones ran to feed the horses and baby goats as soon as they woke up.

“This is really a place for kids over five,” suggested Zang Duong, here with his wife, and a two year-old and four year-old who were too young for most activities, though they loved feeding the animals and going on pony rides. Had the grandparents been able to come as planned, Duong said, he and his wife would have enjoyed all of the activities together. Instead, they alternated.

“But I still enjoyed all of the activities,” said Andrea Duong as the family was getting ready to return to San Diego.

A real plus to a place like this, Essie Wu noted, was for the kids and adults alike to meet families from around the country—and hopefully, Post Pandemic, from Europe as well as the ranch is popular with Europeans, especially in summer.

“The grounds are gorgeous- the cactus and the beautifully maintained trees and the people who work here are so nice, “Wu said. “And we like the food… We’ll keep coming even after the Pandemic.”

A local company, Sky Island Falconry, can also come out to teach the kids about the sport and Birds of Prey. “Expensive but well worth it,” she added.

Of course, you can have as much horse riding… and cattle sorting… and team penning as you like. There are fast rides and slow rides; mountain rides and flat rides; breakfast rides and wine and cheese rides, shorter rides and others that last a half day.

There are available lessons from the wrangles for just $20. One evening involves a Cowboy doing various tricks.

“The food is the best on the breakfast ride,” advised Jonathan Wu.

The food is good the rest of the time too—sliders or club sandwiches one day for lunch with home-made cookies; meat loaf with mashed potatoes, salmon and wild rice or baked chicken as another choice for dinner. Breakfast is to order—pancakes or eggs, with a daily special (breakfast tacos maybe?).

Our first activity—a beautiful flat ride through the cactus, with the mountain range as a backdrop.  I half expected a John Wayne character to ride up. In fact, many Westerns have been filmed here, including the 1977 miniseries How the West Was Won and the 2002 George Clooney Film Confessions of a Dangerous Mind.

“We were supposed to be in Europe right now,” said Crystal Knight. “But we’re not sad we’re here.”