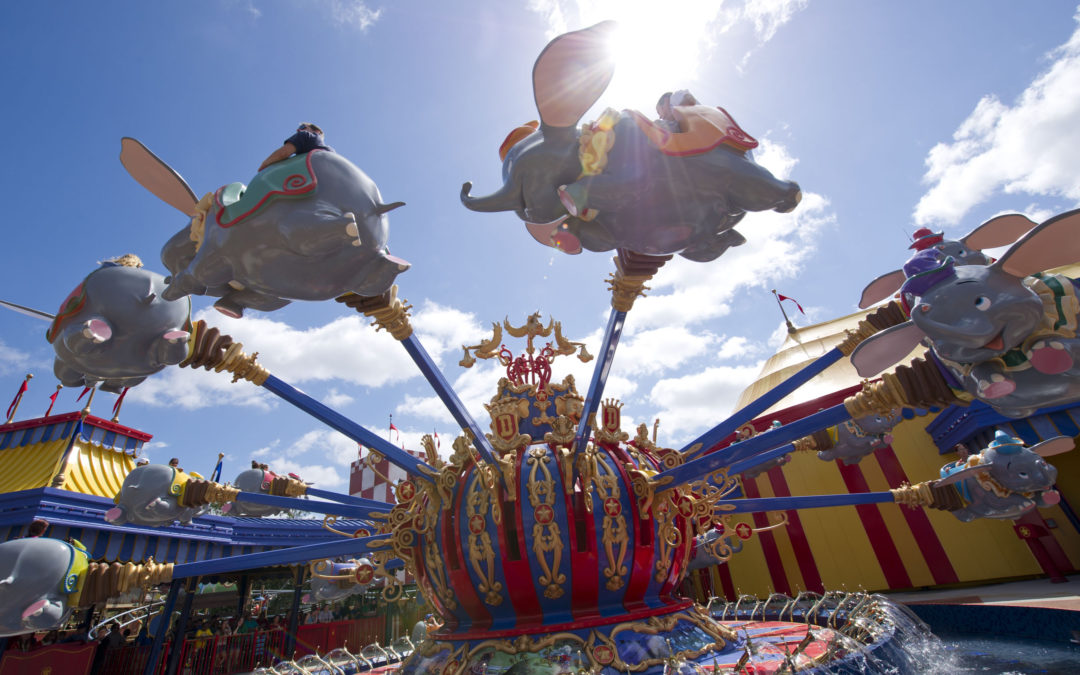 There’s no need to wait until kids are in elementary school to bring them to Orlando—not when every park has plenty to wow the littlest park goers and their parents, including big, interactive play areas designed just for them.

–The Magic Kingdom has the classics like “It’s a Small World”, “The Many Adventures of Winnie the Pooh”, “The Country Bear Jamboree” and parades where the characters invite young park goers to dance. The New Fantasyland  doubled the size of Fantasyland with everything from the iconic Dumbo ride, the chance to meet and greet the princesses at A Princess Fairytale Hall, the chance to walk through the Enchanted Mirror in Belle’s cottage to the Beast’s castle and act out the story of how Belle and the Beast met.  Cool off at the Casey Jr. Splash ‘N’ Soak station and ride the Barnstormer coaster that’s the perfect size for a preschooler’s first coaster ride.

–Your little princesses will want to be transformed at Disney’s Bibbidi Bobbidi Boutique.

–The Boneyard at Dinoland U.S.A. at Animal Kingdom lets your little paleontologists dig for “fossils” in a gigantic sandbox, play on a xylophone that looks like dinosaur ribs and head down prehistoric slides. Take a walk down the trails at Camp Minnie-Mickey and meet the characters at the end; watch the “Festival of the Lion King” and “Finding Nemo-The Musical”.  Take the train to Rafiki’s Planet Watch and bond with the resident goats.

–Literally Turtle Talk with Crush, that loveable animated creature at Epcot’s The Seas with Nemo & Friends.  Bruce’s Shark World at The Living Seas at EPCOT is an interactive play area for kids with buttons to press, knobs to turn, and computers all offering some  first lessons about conservation.  Look for the Kidcot Fun Stops throughout the park.

–Honey, I Shrunk the Kids Movie Set Adventure at Disney’s Hollywood Studios   recreates the set from the classic Disney movie as a huge playground with 30-foot high blades of grass, and LEGOS as big as houses. Kids can slide along a big piece of film or get squirted by a giant leaky hose.  See “Muppet Vision 3D The Great Movie Ride” and “Beauty and the Beast-Live on Stage”. Don’t miss “Toy Story Mania”.

–Don’t miss the Shamu show, the sea lions Clyde and Seamore show and Pets Ahoy! Where dogs and cats take the stage.

–“Antartica: Empire of the Penguin” starts as the animated Penguin Puck takes us on a tour of the South Pole and ends with a visit to a live Penguin colony.

–Check to see if  Elmo and Abby’s Treasure Hunt is offered when you visit.

–Reach out and touch a Stingray  at Stingray Lagoon.

–Learn what it’s like to be a turtle at Turtle Trek and then meet Franklin the turtle from the TV show Franklin and Friends across from Pelican Preserve.

At Universal Island’s of Adventure:

–Parents as well as young kids love Seussland especially The Cat in the Hat attraction where you ride your couch through the pages of the famous book.

–The Olive is three-story boat-themed play area where kids can run around and shoot water cannons.

–Camp Jurassic is a gigantic shaded play area where kids can explore secret caves and wander through a mysterious amber mine.  Dino lovers will love the Jurassic Park Discovery Center where you can see an animatronic raptor being hatched.

–The Flight of the Hippogriff, in the Wizarding World of Harry Potter, is a decidedly young-kid friendly coaster.

–Fievel’s Playland is a big hit with the preschool crowd with ordinary things reproduced on a giant scale so kids see the world as Fievel the mouse does.

–Curious George Goes to Town offers a water playground with pipes, spray guns, giant roof buckets that dump water on those below, a foam-ball playground with chutes, tubes and more.

–A Day in the Park with Barney is not only a show and meet-and-great with everyone’s favorite purple dinosaur but a great indoor play area.

At LEGOLAND Florida, about 45 minutes from Orlando:

—DUPLO Valley, scheduled to open this Spring, is designed so even toddlers can drive a tractor and help farmers plow a field. There’s an adjacent splash area set among larger than life farm animals.

–Fresh from Florida interactive is an attraction that shows kids how food goes from farm to table.

–LEGO City allows kids to explore a town scaled down just for them, even  attending a junior driving school.

–The LEGOLAND Water Park within the park where kids can build their own LEGO raft and float down a lazy river.

Most important, leave when the kids have had enough. There’s always tomorrow—or next year.