Thinking about adventures past and to come — in Alaska 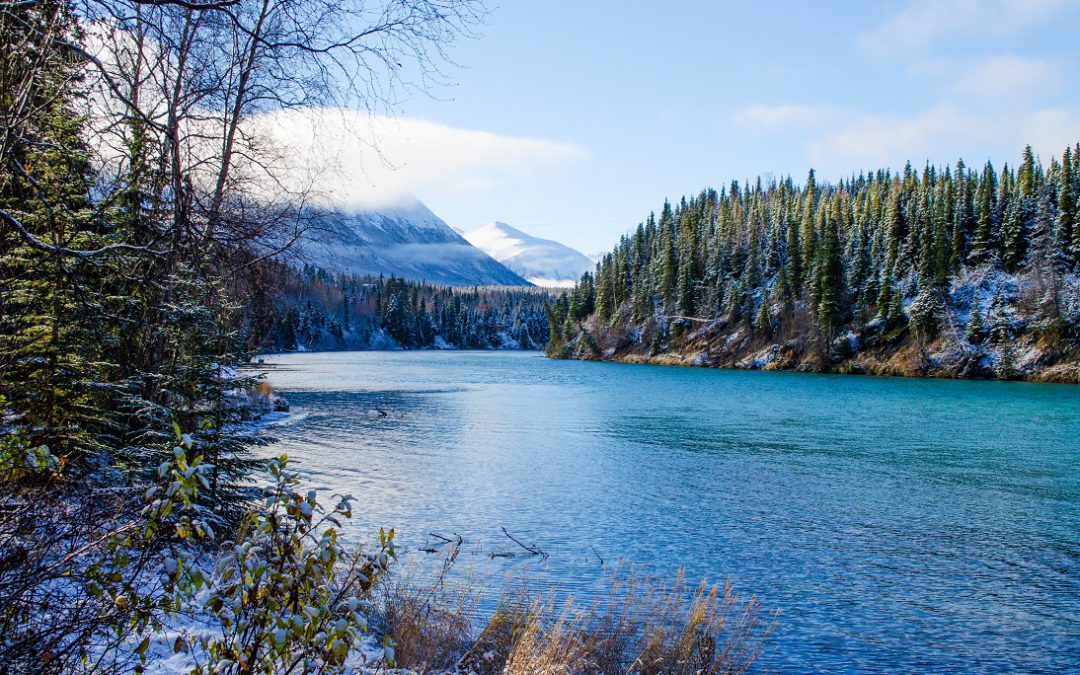 Not to the careening roller coaster that everyday life has become during this pandemic, but to the fishing pole, especially when you are fishing for halibut.

It’s not easy to hold onto that pole — or, at times, to normalcy these days. Stuck at home, reduced to virtual armchair travel, I’ve been musing about lessons learned on past trips — like the days we spent fishing last summer in Alaska. Besides, it’s fun to think about good times — and remind ourselves we will have fun traveling again.

When we started out early that chilly late summer morning, I doubted I’d catch anything, even though we’re in the halibut capital of the world at the tip of the Kenai Peninsula in tiny Homer.

My skepticism is understandable since, after a day and a half of fishing for salmon on the famous Kenai River in Alaska, before we got to Homer, we didn’t catch any keepers. The most exciting part of the day was meeting Chili, the dog, who was fishing with his family. But hey, vacations are like life — they never go as planned. And, as they say, that’s why they call it fishing, not catching.

“The hardest day of fishing I’ve had all season,” said our guide, Sean Smart, at Kenai River Recon, after we unsuccessfully tried nearly a dozen different spots for silver salmon, sockeye salmon and trout. He felt so badly he insisted on buying us a beer at a local brewery. Did I mention a forest fire had closed the road and prevented us from getting back to where we had been staying? No worries. We simply went on to Homer as scheduled to fish for Halibut but without any of our gear.

“Of course you’ll catch fish,” says Grant Peel, the affable 25-year-old boat captain for Alaska Coastal Marine, who is piloting the Foxfire the morning we are halibut fishing. He takes 11 of us hopefuls 25 miles out west into the Cook Inlet (about a 90-minute ride on fairly calm seas) to find those famous halibut that so many come to Alaska seeking.

I’m still dubious when we put the baited and weighted hooks in the ocean, dropping them 200 feet. Immediately one person gets a bite … then another … and another. Within 45 minutes, all 11 of us, me included, have caught the two fish we are allowed to keep — nearly 100 pounds of fish!

“We caught the tides just right,” Peel explained. “There was no current, so the fish ate the bait faster.”

Chuck Kim, a Denver doctor, wins the prize for the biggest, about 15 pounds, and he’s jubilant, posing for pictures.

Nearly a year later, stuck at home, trips canceled in the midst of the COVID-19 pandemic, I smile thinking about that stellar day and the rest of last summer’s trip to Alaska. I’m thinking about where I want to go next when we can travel again — and I encourage you to do the same. Maybe that will take the sting out of adventures you have had to cancel.

I think about all the locals I met in Homer and throughout Alaska who depend on the summer tourism season. I hope some of it will be salvaged this year.

That overcast morning, we started from the famous Homer Spit — a four and a half mile long skinny piece of land at the very southern tip of the Kenai Peninsula, which is chock a block with fishing charters, offices for bear-viewing, kayaking and hiking trips, galleries, eclectic souvenir shops, (we must have gone back to the Salty Girls three times over the course of two days for gifts) and restaurants. (Captain Patties will even cook your catch.)

We’re a diverse group, including a family of three from Colorado who come up every summer to visit family in Anchorage and have fished for halibut many times before; two young guys from Denver, and a couple from Springfield, Illinois, who are newbies, like us. There are a brother and a sister. He’s from St. Paul, Minnesota and she’s from Baltimore, Maryland. Both are traveling with extended family, primarily to visit a brother working in Anchorage.

Homer is tiny, less than 6,000 people, and isn’t a big cruise port. “Everyone knows everyone around here … it can be good and can be bad,” says Eleanor Sweeney, 16, a high school senior.

Eleanor’s parents, Adrienne and AJ Sweeney, own the historic Driftwood Inn with over 50 rooms overlooking Kachemak Bay, as well as AJ’s OldTown Steakhouse across the road and a charter business. They bought the restaurant a few years ago, Adrienne Sweeney said, to close down a honky-tonk, whose rowdy clientele was annoying the Driftwood’s customers late at night. Today, it is a popular steak and seafood restaurant that attracts locals and tourists alike. We feast on Bleu Cheese Potato Chips Cioppino, Alaskan Scallops, and chocolate truffles for dessert.

Adrienne Sweeney is a fifth generation Alaskan; Her mom, Marie Wall, now in her 70s, met her husband Steve when she was in her early 20s and in Alaska to report for Army duty. Steve Wall’s family had been here since the late 1800s and his grandmother, who raised him, conspired to get the two together. Yes, travel can make someone’s life take a turn that will impact generations to come, the Sweeney girls note.

“Kids here may be more laidback and more outdoorsy, but they are like kids everywhere,” said Lillian Sweeney, 14, one of Eleanor’s two sisters. “We don’t live in igloos,” she said. You wouldn’t believe how many people think we don’t have any technology, but it is really like the Lower 48.”

Peel explains that on the all-day charters, the fishing is different, and the boats go after larger halibut — 130 pounds this past season. I’d considered an all-day trip in the hopes we’d be successful, but it was more expensive ($315 per person as compared to $175 for a half-day), required an even earlier start and more than 10 hours on the water.

Besides, locals told me, the smaller halibut caught on the half-day trip tend to be better eating. So here I am holding on to this heavy pole reeling … and reeling… and reeling. My hands are cramping. I can’t figure out the best way to brace the pole. I’m sure I’m going to lose the fish on my hook but … no we pull it up and it’s a keeper!

When we get back to the dock, cold, hungry and all smiles, we hand our fish over to a waiting processor who will cut them into one-pound pieces, flash freeze them and pack them for the flight home (they can also be shipped, but we discover that it’s less expensive to check them as baggage).

The fish, we decide, is the best souvenir ever — that and the stories we tell, of course.