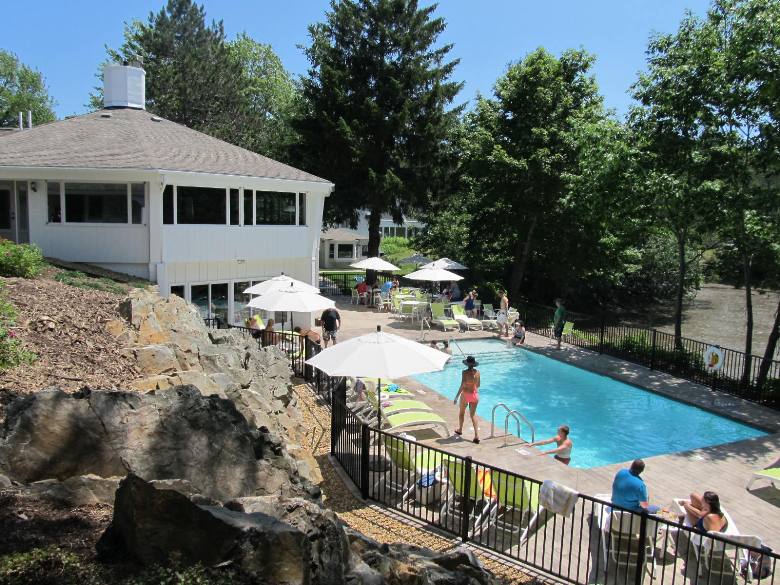 The crowd oohs and aahs as the fireworks go off over the water in Kennebunkport, ME. 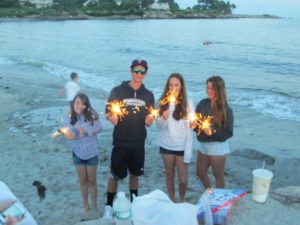 “It’s still got old fashioned charm,” said Liz Daily Ortega, vacationing with extended family—including her two kids from Boston as she has since she was a kid.

But today there are glitzy beach houses along with the campers, Wi-Fi in the hotels and every waterfront activity from stand up paddle boarding to wave runners to kayaking and canoeing – or just building sand castles on the beach.

“It’s all about family,” said her mom Rose Daley, a retired teacher from Connecticut who still lives here.

The McCann family keeps a camper at a campground all year round so they can get away often from their New Hampshire home, said Kim McCann, noting that her five year old son Brady took his first steps right where we are standing on Colony Beach.

“Everyone is so nice,” said Logan Wendling, also coming here since she was a child and now back from Kentucky with her six year old.  “It’s the kind of place where you don’t have to worry about leaving your stuff on the beach and the kids all play together.”

“There’s so much for kids to do here,” said  Heather Simms, here with her husband and eight year old son from Connecticut.  On July 4, she reported, he started boogie boarding in the morning and didn’t stop till late afternoon when his parents dragged him away. “I love it here!” declared eight year old Justin.   He also gave a thumbs up to the  Rachel Carson National Wildlife Refuge in nearby Wells, Me  where there are weekend nature walks .

We’re staying in an old fashioned motor lodge that has been retrofitted for the 21st century—kind of like the vacation style here.  The Lodge on the Cove, which just opened, boasts ice cream socials and music around the pools, complimentary continental breakfast (home made muffins!), free bikes and even a kids’ yoga program.  The rooms  have been updated with custom art,  light colors,  casual furniture and an octagonal shaped main lodge with a downstairs “tiki bar” called The Dory that serves everything from Lobster roll “sliders “ and chowder to burgers to hummus and pita and grilled cheese and veggies and dip for the kids.  (I especially liked the Shrimp Ceviche and Johnny Cove Cakes—crispy fried corn cakes.  Yum!) 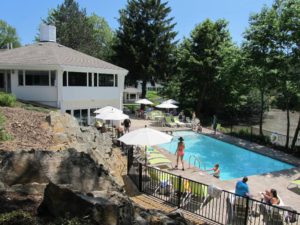 Poolside at the Lodge on the Cove in Kennebunkport ME

The resort is the newest from the Kennebunkport Resort Collection that includes Hidden Pond, a luxury boutique hotel known for its extensive garden and farm to table restaurant, The Tides Beach Club, beach front The Cottages at Cabot Cover, The Grand Hotel, The Boathouse Waterfront Hotel, a new locale on the Kennebunk River.

This morning, we persuaded the 14 year old we had with us—a young friend from the Bronx we know through the Fresh Air Fund  which connects inner city youngsters with families up and down the East Coast who host them for vacations– to get up early for a stand up paddle boarding lesson at the beach in front of The Tides Beach Club.

“The idea is to relax and have fun,” says the energetic instructor Marcio Munch.  My husband and Enesi Domi, manage to have lots of fun, though they do fall off several times.  They’re still smiling when they get out of the water so that’s a good thing.

Kennebunkport is the kind of town where you can do as much or as little as you want — go out on a long bike ride (pedal along the beaches and back roads with Summer Feet Cycling www.bikeportlandmaine.com

–Go out on a lobster boat and see how lobster fishermen fix their traps (www.regosalobstertours.com)

–Go fishing The kids are guaranteed to catch fish promises Capt Brue Hebert, seen on the National Geographic Chanel’s Wicked Tuna Show.  He enjoys family charters so much that he has special shorter ones for families www.libretirose.com

–Head for the beach.

–Eat!  Head to a traditional “clam shack” for a lobster roll, fried clams or even a burger.  The Clamp Shack www.theclamshack.net  has even been voted to have Amrica’s best lobster roll! We also  became fans of Mabel’s Lobster Claw , a small old fashioned seafood place across the road from the ocean in Kennebunkport.

Last night, like everyone else who watched the fireworks, we left smiling and tired, glad  the beach was just a short walk from our hotel—and that there was an ice cream stand on the way.