Three Days on the Mexican Riviera at Barcelo Maya 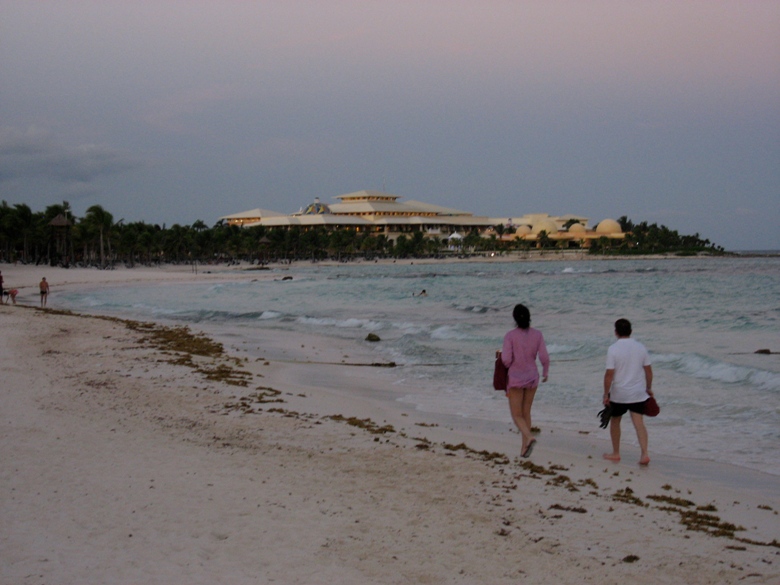 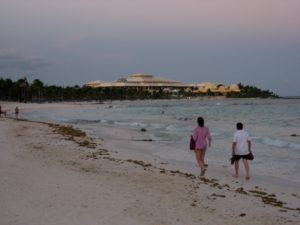 Day One (of three) — Our mission was to relax, our goal was to learn a little Spanish and our destination was the Mayan Riviera, Mexico – Barceló Maya Palace Deluxe.  The resort is located about fifty miles from the Cancun Airport and is well worth the cab ride to escape the dense Cancun for the remote resort that occupies the shores of the Rivera as far as you can see in either direction, a total of 1.25 miles of beach.

Immediately upon arriving at the immense lobby with high ceilings with an eclectic Caribbean feel, my boyfriend Jonathan and I are awed by a dramatic panoramic view of the beach framed by the grand architecture.  Immediately, we feel relaxed and decide the mission has been attained.

Now, for the Spanish. We arrived equipped with a phrase book, purchased after much deliberation over which one to buy- Spanish, Latin American Spanish or Mexican Spanish?  We hedged our bets on Latin American Spanish, after all Mexico is in Latin America.  Between Jonathan and I, we speak 5 languages and wouldn’t let the opportunity to dabble in the linguistics of a very useful Romance language pass us by.

We were pleasantly surprised at our Brazilian grill dinner at Rodizzio—one of the 14 a la carte restaurants available at Barceló—by both the food and the waiter that allowed us to practice our fledgling Spanish skills.  It was pretty easy to get by. All of the meat, including turkey, roast beef, sirloin and green chorizo looked so good that when our waiter passed by and offered us a cut of meat all we needed to say was “sí”.  Using the Romantic roots of the question we were able to finagle our way out of an awkward question by the waiter as to if this was our honeymoon.  Easy response again: “no”.  We were proud of our language skills, until the waiter challenged us, “do you speak Mayan?”

This is Mayan land, we are told, and there is a lot of mysticism around here.  So much mysticism that the superstitious-minded believe the world will be ending December 21, 2012.  It doesn’t feel like the world is ending at Barceló, though; life feels so good that you feel like you could live forever in this paradise on the Mayan Riviera.  There is a particular attention to detail that makes the resort spectacular, as every mural adorning the walls and every tile completing the rain dance shower in the suite seems to be deliberately placed to appeal to the senses of the guests.   The Barcy Club for kids has taken note of the significance of this year in the Mayan calendar and has begun to incorporate activities to teach kids the Mayan alphabet and Mayan numbers.  Now, if I had this opportunity as a kid, I could impress the citizens of the Mayan Riviera.

That’s not the only activity at the Barcy Club, catering to kids four to twelve, and to teens eleven to seventeen.  Video games are discouraged here, and most kids will quickly forget about electronics after the many events including a cookie baking pajama party, piñata making (and breaking) and plenty of pool and water sports time. Kids are definitely catered to outside the Barcy Club, from spacious family suites that give kids their own space, a colorful water park with various slides, to special kids’ buffets at the restaurants.  The kids will get their share of Mexican culture, too, on September 15, 2012, Mexican Independence Day, when the festivities will include Mexican face painting, Mexican Lottery and Spanish lessons.  There’s no shortage of culture and language-speaking opportunities here for families.

Time to put down the Spanish phrase book and go for a swim!