Tinkering at the Exploratorium in San Francisco 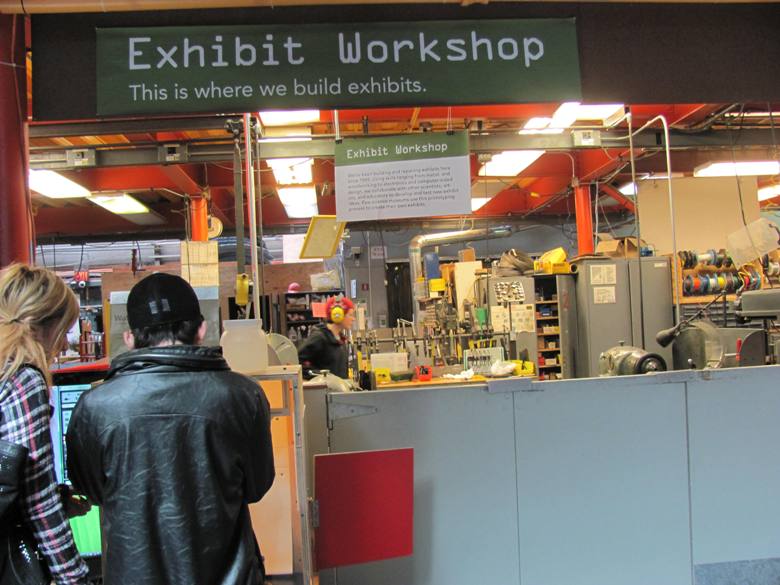 Learning how they build exhibits at San Francisco Exploratorium

I’m at San Francisco’s Exploratorium (www.exploratorium.edu ) which, when it opened in 1969, served as the prototype for museums becoming places for an interactive experience.

That continues today as the museum staff work on what the museum will be when it moves to its new digs on Piers 15 and 17 on the Embarcadero in 2013, more than doubling its exhibit space to 230,000 square feet and opening up Bay Views from the site for the first time in more than 50 years.

The Tinkering Studio here at the museum’s Presidio location is serving as a prototype for some of those new exhibits. This month, the “tinkering” involves metal and wires.

Kids are busy at one table figuring out how to connect wires to make buzzers work and lights go on; at another table, they are taking apart mechanized stuffed animals to see how they work. They can use wire to create mechanized sculptures a la Calder or work with an artist in residence to make their own metal creations.

“We create the experiences,” Petrich says, watching the kids excitedly figure out how to attach wires so they can make a buzzer sound or a light go on. “The experiences are different for each person.”

And that may be what sets this museum apart.  It is a cavernous no-frills space where kids and adults are literally making waves, making a pulley system, making balls “float in the air,” making wind, spinning patterns.  You can watch exhibits being built or check out ones that challenge you to think. “How much water do carrots need to grow?” says one exhibit with different sized carrot tops (answer: the larger the greens, the more water).

“There is not one way to do any project here or approach any exhibit—“Each person has to make sense of it with his own path to understanding,” Petrich said.  That’s what makes this place so cool—and so much fun for kids and adults alike.

“Do two rooms look the same if painted different colors” The questions go on and on. I’ve rarely seen so many kids and parents so engaged and focused.

“The tinkering studio is built on the entire history of what the Exploratorium is,” explains museum spokesman Linda Dachman—the idea that you are supposed to “tinker,” to create an individual experience.

You are also encouraged to leave your creations so they become part of the exhibit and inspire the next group of visitors — “changing  the experience for the next person,” Petrich explains.  Find projects to do at home at:  www.tinkering.exploratorium.edu

“This isn’t a museum, it’s a laboratory where people get together to inspire each other. It isn’t like anywhere else,“  said Tim Humkin, a well known British engineer, cartoonist and TV personality who is here as a visiting artist who is helping to teach the tinkerers  welding—their creations to become part of a huge whimsical metal arch that welcomes visitors to the space.

In the “Learning Studio,” the staff takes what happens at the Tinkering area and elsewhere in the museum  and turns it into future exhibits and experiences—whether it is building a cardboard community of houses or creating puppets or mechanical toys. At the new Exploratorium, thanks to huge glass windows, visitors will be able to see the process .

As the Exploratorium considers the new exhibits that will anchor its new space, it is striving to continue to be a leader in what museums can and should be, said Anne Jennings, the program relocation manager, as she stands in front of a model for the new museum. Not only will there be spectacular Bay views but large and small galleries that will help people to understand how they interact with the natural world. The Tactile Dome where people enter a pitch-black environment and must find their way out by touch will be larger too, fans will be happy to know.

Physics was never so much fun!