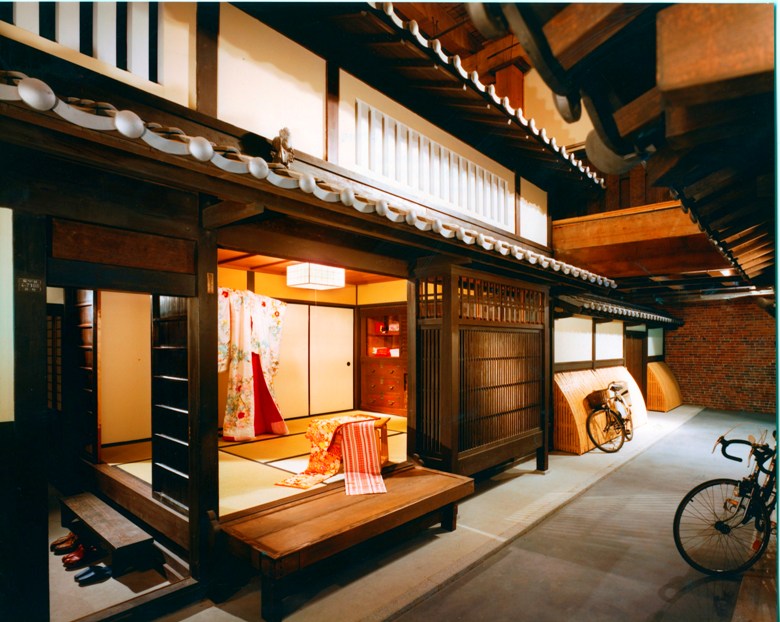 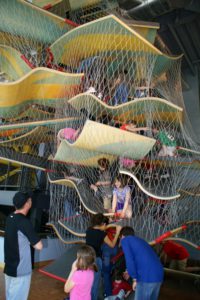 I love playing follow the leader on vacation, especially when the leader is two feet shorter than me.

When the kids lead the way, we’re guaranteed smiles rather than whines. And there’s no better place to let kids lead the way and to see the power of play in action than at the Boston Children’s Museum, which is celebrating its centennial this month on the South Boston Waterfront.

The Boston Children’s Museum is the second oldest children’s museum in the country and is credited with ushering in the era of hands-on museum exhibits. Throughout this centennial year, the museum is promoting how play helps children develop key critical-thinking, problem-solving and communication skills.

“It’s all about the kids here,” Vivian Ivory, 9, says happily. “There’s so much stuff you can do and not just look at.”

Exactly. Throughout the huge steel and glass building ( there was a $47 million renovation and expansion in 2007) kids are encouraged to make giant bubbles and navigate the three-story vertical climbing maze. “That was my favorite,” said 10-year-old James Moses, visiting from Little Rock, Ark.

His grandparents said that James and his younger brother, Aidan, who lived in Boston when they were younger, insisted on coming to the Children’s Museum first when their grandparents brought them back for a visit. It’s easy to see why.

Boys and girls were noisily screwing and sawing at Johnny’s Workbench, making and sending their birthday cards to the museum through pneumatic tubes in the Art Studio, generating energy with a kid-sized hand crank to make the giant KidPower sign move and dancing on the interactive dance floor that lit up with their movements.

Inside, PlaySpace — the first museum exhibit for babies and toddlers — the diaper crowd is busy crawling, jumping and exploring. The unique Countdown to Kindergarten exhibit is also packed, as kids focus on what they need to know before heading to kindergarten — their numbers and letters, for example. “We spent a lot of time there today,” said Gretchen Heefner, explaining that her son Owen is going to kindergarten this fall.

Let the kids dictate where you go and how much time you spend, suggests Leslie Swartz, the museum’s senior vice president of research. I think that’s a good idea for any museum.

Swartz urges parents to relax, and, rather than trying to see everything, spend time where the kids are most engaged. “Some parents find that frustrating,” she concedes. “Parents have to open their minds … and play too!

There’s going to be a Power of Play Gala Weekend Oct. 4 to 6 with everything from a huge community dance party to a children’s gala, festival of arts and a big birthday ceremony around Fort Point Channel — all celebrating the museum’s start (in a house in the Boston neighborhood of Jamaica Plain by the Science Teacher’s Bureau). The bureau envisioned a place where kids could learn more about science. Neighborhood kids spent entire summers there, according to Swartz, who added that the museum has gotten many letters from scientists and engineers over the years saying they were first inspired toward a career in science by their time at the museum. 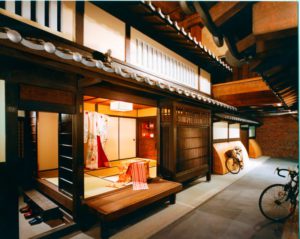 The museum moved to its present location in 1979, long before the area was a bustling destination for tourists. Today, outside on the deck overlooking the water, families are doing art projects and enjoying snacks. (The 40-foot-high ‘30s Hood Milk Bottle is not only a Boston landmark, but the place for a sandwich, hotdog or ice cream.)

The year-old Boston Tea Party Ships and Museum is just across a short bridge; Faneuil Hall Marketplace is a short walk, as is the terrific Rose Kennedy Greenway parks and the Institute of Contemporary Art. (I found Fodor’s Boston and Lonely Planet Boston useful in planning a Boston getaway.)

The Children’s Museum itself has become such a tourist attraction in itself that hotels — from the iconic Fairmont Copley Plaza, which also just celebrated its 100th anniversary, to the sleek Renaissance Boston Waterfront Hotel is offering special packages for young museum goers and their parents. The InterContinental Boston, too, in honor of the centennial, offers its new Boston Children’s Museum Package, offering tickets to Boston Children’s Museum for two adults and two kids (age 12 and under), Old Town Trolley tickets (two-day pass) for two adults and two kids, a complimentary children’s arrival amenity (Molly the Elephant stuffed animal and milk and cookies), as well as free kids’ meals off the Miel “Brasserie Provencale” children’s menu.

“I can’t get over how good a time they are all having,” said Salpi Sarafian, who had brought her three young nephews visiting from Virginia and Minnesota.

The museum is one of the few children’s museums to have its own collection — more than 45,000 items, including Shaquille O’Neal’s size 22 sneakers, which are placed next to baby shoes as the centerpiece of a lesson on big and little. Kids can also take off their shoes and step inside the big Japanese house that was a gift to Boston from Kyoto in 1979.

There are messages throughout the museum about healthy eating, (go to water, not to soda), about living greener (the expansive green roof with 6,000 square feet of plants not only helps keep the building cooler in summer but the view helps people feel happier) and being more active.

Every effort to be inclusive is made from the signs in both Spanish and English to the Black Boston exhibit that celebrates the diversity of Boston’s African-American community (kids are busy playing steel drums, putting on carnival costumes and “shopping” in a Dominican store).

Not everyone, of course, can afford the $14 per person admission fee, much less a hotel stay. Those with Massachusetts public aid cards are admitted for just $2. There are also discounts for Boston Public Library cardholders and there are signs outside the museum that say if you can’t afford the entrance fee, just tell the cashier.

Thanks to a sponsorship with Target, admission on Friday nights is just $1, which draws a lot of middle-schoolers, museum officials say. “I can still find fun things to do here,” said Rebecca Elsen, visiting from Chicago with her parents and three younger siblings.

That’s the case for adults, too. Evenings designed for 20 and 30somethings sell out within hours.

But at least they don’t cry when it’s time to leave. Most of the youngest museum goers do, said Leslie Swartz. “Every afternoon,” she said. “It’s hilarious.”