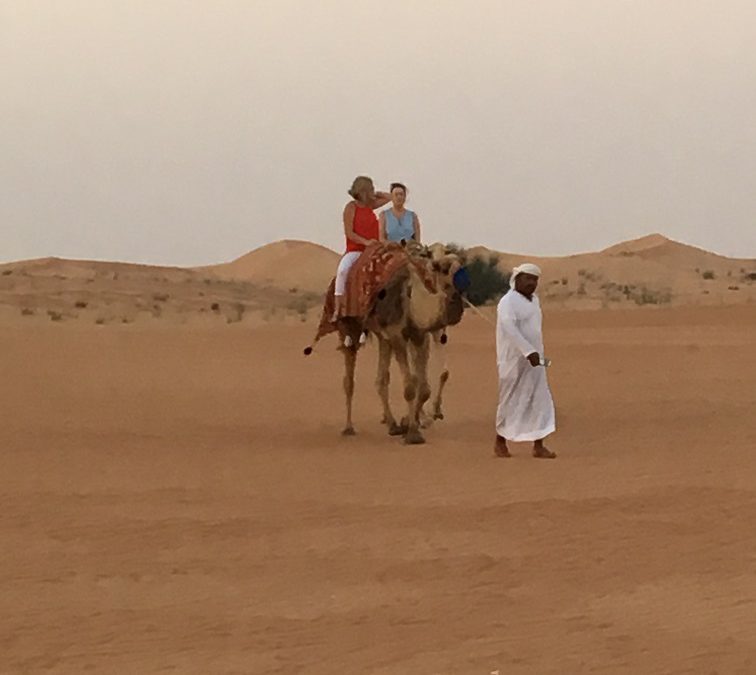 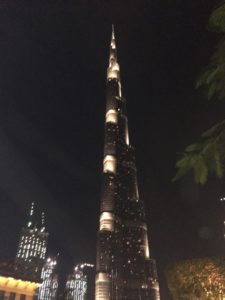 DUBAI, United Arab Emirates — I’m on in intense roller coaster, except there’s no track and we’re not in a theme park.

We’re in the middle of the Arabian Desert at a nearly 140-square-mile Desert Conservation Reserve about an hour southeast of Dubai riding in a four-wheel drive SUV up and down 6,200-foot-high sand dunes.

I’m glad I’m not driving as we swerve over and around the dunes. Did I mention we’re in a convoy of 75 cars? And that 385 people are here? There’s a traffic jam in the desert when we stop to watch the Instagram-worthy sunset. There is a falcon show, artists offering hennaed tattoos, camel rides, sand-boarding down the dunes, belly dancing, hookah smoking and a traditional barbecue dinner with fresh baked pita, hummus, lamb and chicken kabobs. It’s kitschy, but fun.

Dubai is such a mixture of the old (traditional dress and chance to experience Bedouin tradition like this tour from Arabian Adventures Desert Safari, camel races or camping in the desert) to the new (the tallest building in the world, The Burj Khalifa (2,716.5 feet) and the adjacent Dubai Mall, the largest and most visited mall in the world, complete with one of the world’s largest aquariums (over 33,000 animals and a walk-through tunnel), an Olympic-size ice rink, waterfalls, 1,200 retail outlets (every brand from H&M to Alexander McQueen), dozens of restaurants and cafes and a 22-screen movie theater.) Outside, there is a choreographed “water show” in the afternoon at the Dubai Fountain on the Burj Khalifa Lake ringed with restaurants between the Dubai Mall and the Burj. Eighty percent of those who live here are expats.

There are also big resorts like Jumeirah Mina A’Salam, one of four hotels within a huge resort — so big you go from area to area in a boat. (Families like the complimentary kids’ club.) 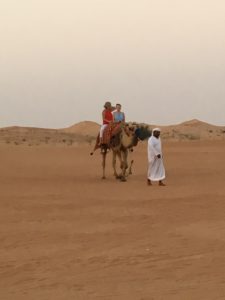 The city even has the largest indoor theme park in the world (needed in this climate!) — 1.5 million square feet at IMG Worlds of Adventure, complete with animatronic dinosaurs and plenty of Cartoon Networks and Marvel experiences.

It’s Las Vegas on steroids. But you will hear the imam’s call to prayer and see the minarets and domes of mosques dotting the modern skyline. And everywhere you go there are men and particularly women in traditional dress, many with just their eyes uncovered. At the top of the Burj Khalifa there’s a woman taking selfies dressed head-to-toe in a robe-like black abaya, with only her eyes uncovered in deference to Muslim tradition. Yet she was as busy with her iPhone as was everyone else, presumably letting her friends know she was at the highest outdoor observation deck in the world.

For many Americans, a visit here is a bucket list trip as tourism continues to grow — the city welcomed a record 14.9 million overnight tourists last year, with more than 600,000 Americans visiting. For those traveling to India or Australia, for example, it is doable with packages from Emirates that allow for layovers to see the sites and offer discounted hotels. (And though the flight is long — nearly 15 hours from JFK — Emirates makes flying fun again, at least the kids I met thought so.

At the Ripe Market at Zabeel Park, on a sunny weekend, expats, tourists and those in traditional dress, shop for organic vegetables, purchase snacks and peruse artisans’ wares — jewelry, leather, clothing. Few are local.

Dubai’s beginnings can be traced back to the 18th century when members of the Bani Yas tribe settled on the banks of the Dubai Creek. By the late 1870s, Dubai had become a major trading port.

Once oil was found here in 1966, there was a massive influx of foreign workers that continues today — 200 nationalities. The city prides itself on being a tolerant and multi-cultured society. No one looks askance at westerners in sleeveless tops or short skirts.

You’ll get a sense of what Dubai was once like at Old Dubai. With the small, one-room shops packed floor to ceilings and the narrow, twisting pathways, this couldn’t be more different than the sleek Dubai Mall. There seem to be more locals than tourists, perhaps doing their weekly shopping, and there are the iconic wooden dhows (traditional sailing vessels) along the shores of the creek, especially during May when they take part in the Al Gaffal Dhow Race, a tribute to Dubai’s pearl-diving heritage.

(A visit to the Dubai Museum is a good way to get an introduction to the city’s history.) Take a traditional Abra boat across Dubai Creek (the cost is about 30 cents) here at the original center of Dubai’s commerce. There’s the Gold Souk and Spice Souk with all varieties of curry and other spices piled outside the shops and the Textile Souk with every variety of silk, cotton and embroidered fabrics. This is a place you may want to wander and inevitably get lost in, if the aggressive shop keepers don’t harass you too much.

I’m glad when our roller coaster ride through the dunes ends in time for us to see one of the most spectacular sunsets ever. It doesn’t seem to matter that there are hundreds of other people scattered around the dunes, each taking in the scene in their own way. Of course, they’re taking plenty of pictures of themselves jumping and sliding up and down the dunes. Me too.

Another piece of pita, please.