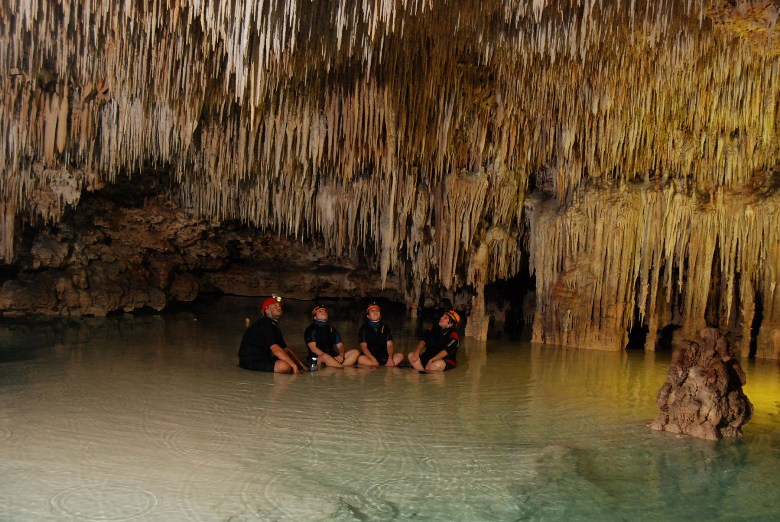 Sitting cross-legged in the water, 60 feet underground in a Mexican cenote.

We are sitting cross-legged in the water, 60 feet underground in a Mexican cave surrounded by some of the most beautiful formations I’ve ever seen, as the niece of a famous Shaman chants a Mayan prayer asking the gods to let us go in peace.

Not your typical day at a Mexican beach resort, though we’ll hit the pool later. We’re just an hour or so from Cancun, a few miles from Playa del Carmen, five miles off the highway along a bumpy road in Rio Secreto (www.riosecretotours.com), a unique cave just opened to the public last year, after the owner of the land, Don Cleo, inadvertently discovered it while chasing one of his animals.

There are underground “cenotes,” roughly translated it means sacred water that gives life, — river systems that crisscross the Riviera Maya. What makes this cave so unique, explains our guide Andres Orozco, is that it’s the only one not completely flooded. There are thousands of stalactites overhead — big ones, small ones that look like sunbursts. We follow our guide Andres down past giant calcium dunes.

He explains cenotes were holy for the Mayans. In another part of the cave not open to the public, they have found pottery dating back to 800 AD. Archaeologists from Mexican museums have yet to confirm their value.

“We want people to appreciate what came before us,” Andres explains. Whether you want adventures like this with your kids (those as young as five can safely explore this cave, as can seniors), want to learn about endangered sea turtles or if you simply want to hit the beach, there’s no better time to visit Mexico. Don’t let swine flu keep you away,

The Centers for Disease Control and Prevention says Mexico is safe and tourist spots are far removed from those experiencing political turmoil.

Still, lingering concerns have sent Mexico’ tourism plummeting — as much as 75 percent in some places, says Gabe Saglie, senior editor at Travelzoo, and that’s resulted in unprecedented deals that he expects will continue well into the fall. Teens and younger kids are getting a free ride at many places. Expedia.com reports hotel rates in Cancun can be had for up to 51 percent less than last summer. Airfare to Mexico is also down — 29 percent from last summer, according to Travelocity.com Senior Editor Genevieve Brown. The average ticket is under $400.

“I tell all my friends they should go to Mexico,” Brown says adding that you can live it up with your kids in a deluxe resort you might not have been able to afford a year ago. For example, the Fairmont Mayakoba in Mexico’s Riviera Maya (www.fairmont.com) has rates starting at $179 a night with a fifth night free. Kids up to 12 eat free, too, and there’s even a new interactive kids’ fitness program.

Look for rock-bottom prices at smaller hotels too, like the Las Villas Akumal (great snorkeling) with two- and three-bedroom beachfront villas starting at $129 a night. Check out (www.luxehotels.com) for this and other Mexico deals. If you are thinking about a trip later this year, don’t be shy about asking what these resorts will offer in order to get you to book now says Saglie. Grab a holiday deal when you spot one — and there should be plenty — because reduced airline capacity might make last-minute trips problematic.

Here’s just a sampling of what’s out there right now:

— Take part in the Sea turtle hatching process and spend time with a local biologist on the beach at the Casa Magna Marriott in Puerta Vallarta. There’s also a Kids’ Club with Spanish lessons, pottery painting, Mexican cooking lessons– all for rates as low as $162 a night, including breakfast in newly renovated rooms for a family of four. Enter promotional code MAJ when you book online at www.puertovallartamarriott.com

— Check out ancient Mayan sites and Mexico’s largest protected marine nature area with new “discovery” opportunities at Club Med Cancun.That’s if you can get the kids to leave the resort with its mini clubs, teen clubs, snorkeling, circus school, waterskiing, in-line skating, sailing and more — all at all-inclusive WOW rates that start at just $99 per person, half that for kids up to age 16. This is the best deal Club Med (www.clubmed.com) has offered in years.

If your kids are preschoolers or younger, grab the same deal at Club Med Ixtapa Pacific, renovated last year with an eye toward programs for toddlers and infants, complete with family suites, day care for children starting as young as four months and freshly prepared baby food. — Join forces with friends or extended family at your own villa with a pool.

“It’s a lot cheaper than a resort,” says Margery Hawkins, who rents her three-bedroom beach house on the Sea of Cortez (www.hawkinshideaways.com). The house sleeps seven and goes for $205 a night. The vacation rental Website www.homeaway.com lists some 2,500 Mexico rentals — some under $100 a night. — Teach the kids to snorkel at Ceiba Del Mar Beach and Spa Resort (http://ceibadelmar.com/english/).

The resort is 20 minutes from Cancun Airport and as part of their Rest and Relax deal, two kids 12 and under stay free and you get two free massages, yoga, afternoon tea, water toys and even bikes — all for under $1,400 for five nights. — Single parents can save a bundle at the all-inclusive Velas Resorts in Puerto Vallarta, Riviera Nayarit and the Riviera Maya (www.velasresorts.com) where until the end of September, the single supplement for parents traveling solo with their kids is waived and two kids up to 16 stay, eat and play free. Rates start at $165 s night.

Go to the Riviera Nayarit and spa treatments are part of the deal. Meanwhile, deep underground in the cave, we’re walking and swimming where Mayans did more than 1,000 years ago. So far, only about 10 percent of the six or so miles that have been explored are open for tours, says Otto Von Bertrab, whose company offers this experience. “This region is a lot more than just the beach,” he adds. “This is an experience people don’t expect. It’s a fantastic surprise.” I’ll say!