To Norway, the land of fjords, ‘Frozen’ and family fun 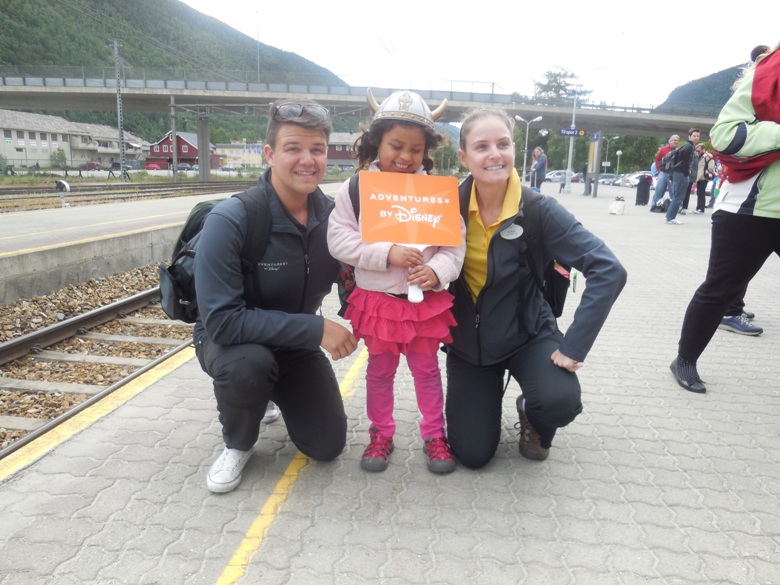 No, not the Splash Mountain in Walt Disney World or Disneyland, we’re actually in Norway touring the gorgeous fjords with Adventures by Disney where one waterfall is bigger and more awesome than the next. In less than an hour on our Fjord Safari, where we ride inflatables, we pass 18 waterfalls, including the Sagfossen waterfall, which is about 1,600 feet high. We pass kayakers as they pause to marvel at the power of the falls and get a different perspective when we hike to the top of Brekkefossen waterfall in the tiny town of Flam (population 500) where school kids have left a book in a mailbox along the trail asking visitors to tell them what they think.

“You’re lucky to live in such a fantastic place!” we write.

Naeroyfjord is one of just two fjords in the world that has been designated a UNESCO World Heritage area. It’s easy to see why — the craggy mountain peaks, those thundering waterfalls and the small villages like Undredal (population 65 people and 350 goats). We see a herd of baby goats grazing by the water’s edge.

Another day, we eat lunch beside a glacier. We stay at the Hotel Union in Geiranger, owned and operated by the same family for four generations, which overlooks the fjords from practically everywhere, including the spa treatment rooms, the kids’ pool and even our room.

I guess I keep thinking “splash mountain” everywhere we go because we’re on this new Adventures by Disney itinerary that is designed to showcase not only the beauty and culture of Norway but also the Disney brand and the filmmakers’ inspiration for the hit movie “Frozen,” the story of the young Norwegian Princess Anna and her sister, Queen Elsa, and how sisterly love saves all.

This year, Norwegian Tourism officials say, there has been more than a 30 percent uptick in tourism here, despite the fact that Norway may well be the most expensive country in Western Europe. (Think $25 pizza and $12 beer. I found Lonely Planet’s Norway book very useful.)

The debut of Norwegian Airlines’ nonstop service at bargain prices in their 787 Dreamliners from California, Florida and New York certainly is helping fuel tourism from the United States. But tourism officials here credit the runaway hit “Frozen,” (the story inspired by Hans Christian Andersen’s tale “The Snow Queen” had been discussed at Disney for decades), for helping to put Norway on family travelers’ must-visit list.

I don’t think I’ve been anywhere in recent months without a little girl belting out “Let It Go!” the Oscar-winning song from the movie. It is no surprise that kids are clamoring to see where Queen Anna and Elsa come from. No wonder the new Disney cruises to the Norwegian Fjords are selling briskly, though they won’t debut until 2015.

The Adventures by Disney trip begins in Bergen. Its famous multi-colored historic wooden houses and picturesque port (we loved exploring the famous Fish Market where we sampled smoked whale and all varieties of salmon) is reminiscent of the fictional kingdom of Arendelle, home to Queen Elsa and Princess Anna. We wonder which snow-covered mountain is the home of Queen Elsa’s ice castle.

You just have to tour one of Norway’s famous stave churches as we did at the Borgund Stave Church, which dates back to 1180, with its narrow dark pitched roofs to see where the inspiration for the fictional castle and coronation room came from.

Adventures by Disney offers deluxe escorted trips to more than two dozen destinations, including options on board their cruise ships, but it’s not as if Mickey Mouse and Goofy — or in our case, Queen Elsa and Princess Anna, jump out at every turn. It’s rather the idea that well-heeled families who trust the Disney brand will trust Disney to show them a good time touring Europe, Costa Rica or the Galapagos, among other places, meeting up with local guides at each stop. This isn’t a bona-fide adventure trip either — but rather an escorted tour with some outdoor fun (a float trip, a visit to a “summer” farm high above the fjord) designed with kids in mind.

There are Disney touches — special commemorative pins each day, for example, and Junior Adventurer evenings with kids’ food, crafts (make your own troll!) and Disney Karaoke. Of course, Disney films play on the bus and we play Disney Jeopardy. “Tinker Belle” picks up our luggage and delivers it to our hotel room; we don’t even have to check in; the guides hand out the keys and help amuse the kids. They have everything we need — hand sanitizer, snacks, sun screen.

These are expensive trips — starting at more than $5,000 per person in Norway, just slightly less for kids, plus airfare and tips for the guides. You travel in a group of 40 and if your kids are prone to motion sickness, this itinerary, with so much time on winding roads, may not be for you either. The days are very long and you will change hotels several times — not easy when you have to keep kids organized. Even I struggled, thinking I’d lost a shoe at one of the hotels, only to find it later in my husband’s suitcase.

But there are a lot of pluses to an escorted tour, especially in an expensive country where it can be difficult to reach the sites you want to see. Not only does someone else sweat the details but one of our two guides, Torgeir Skjerdal, grew up on a farm here and is a wealth of fun facts. Did you know the Norwegian alphabet has three more letters than the English alphabet?

We learn that Norwegian farmers, like Skjerdal’s dad and grandfather, would have to move their sheep to “summer farms” high in these hills so they could graze in the summer months. Women would make traditional brown goat cheese — carrying the milk to the icy rivers to cool it, then stirring it for hours — storyteller Leif Inge tells us at his cafe in Undredal.

“In Norway, farmers have to use the mountains and the valleys,” he said. “All of their resources.”

That may be why Norwegian folktales became such a tradition. Up in the mountains on their own, they had nothing but their stories of trolls and ogres, witches and wood nymphs to entertain them.

“Trolls help us appreciate the power of nature,” he said. “They bring us good luck.”

I hope so. I brought them home for each of my kids.