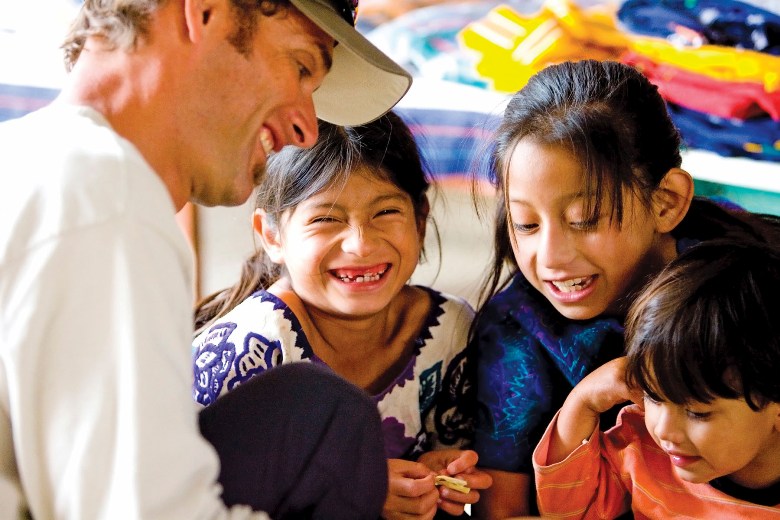 I pop the toasted grasshopper right in my mouth.

It tastes kind of like bacon and is seasoned with chili and salt. Not bad! My kids wrinkle their noses. We are walking through a market in Oaxaca City where we’ve arrived just this afternoon. Locals are selling the “chapulines” — there are big piles of them — for just 3 pesos a bag (about 40 cents).

Oaxaca is in the southeastern part of Mexico and we’ve come here for a few days of cultural immersion after a week lazing on the beach near Playa del Carmen. (More about that in another column.) Mexico beaches are terrific, of course, but there is so much more to see and do in this country (www.oaxaca.travel and www.visitmexico.com). To make the most of our time, we’ve arranged for Austin-Lehman Adventures to plan our stay so that I don’t have to fret the details. The benefits are immediately apparent when there is a glitch at our hotel and there isn’t a bed — literally — for my 24-year-old son, Matt. While our guide, Nicholas Garcia, shows us Oaxaca’s historical center — the famous Santo Domingo church dates from the 16th century — Austin-Lehman’s Carl McLellan finds Matt a room around the corner for the night, at no charge, saving me a huge hassle on unfamiliar turf. (If you book with Austin-Lehman, mention Taking the Kids and they’ll throw in a free, pre-trip night accommodation.)

Oaxaca is famous for its food (mole, chocolate) its artisans and the astounding beauty of its surrounding valleys where the Zapotecs, Mixtecs and some 14 other ethnic groups live and preserve their culture. There are ruins to explore, carvers to meet, bike rides on dirt roads past farmers on donkey carts, fantastic meals (how about a Tlayuda, a special Mexican pizza made on a giant tortilla?), and the chance to see the world’s largest cypress tree. (Fifty people could hold hands in a circle and still not surround the tree in Santa Maria El Tule, which is about eight miles outside of Oaxaca City.)

We even have the chance to join a cooking lesson taught by American chef Susana Trilling at her Seasons of My Heart Culinary School located on her hillside farm outside the city. Trilling has raised two kids here and is so accommodating that she welcomed a family with a baby to our class, even arranging for someone to take care of him. “Mexico is so wonderful for kids,” she tells me. “Everyone loves children.”

That’s obvious in Oaxaca City’s Zocalo city center where a cacophony of sights and sounds greet us. There are dancers performing, lights twinkling from the trees. A woman sells candied apples on a long stick; I’ve never seen so many colors of cotton candy. Kids run and play with balloons three times their size, while their parents laugh. There are many tourists here, but very few Americans.

In one village, we watch a 15-year-old girl, decked out in a blue sparkly dress, being led down the street by a band to commemorate her Quinceanera, the celebration of her 15th birthday. Surrounded by family, she smiles at us shyly, as drums, trombones and trumpets blare.

Another morning, we tour the ancient ruin of Monte Alban, where Zapotecs lived from 500 BC until 1500 AD. The place is huge — some 12 square miles. There are 21 buildings in various stages of excavation here. The views of the surrounding mountains and valleys are stupendous. We climb down into an ancient tomb and marvel at the ancient toys in the museum. Can it get any better than this?

Sadly, tourism has still not completely recovered down here, since the 2006 teachers’ strikes and ensuing unrest. “Today, Oaxaca is friendly and safe and colorful,” promises Chris Schroers, who, along with his wife, owns Como Agua pa Chocolate , the charming restaurant overlooking the Zocolo. We ate dinner there one night.

The few American families we meet couldn’t agree more. Tracy Turner, from Atlanta, said her family opted to celebrate her sister’s birthday here because the family wanted a place that would combine culture, good food and good shopping, as well as some pool time for the three teenagers along on the trip. “So many kids are learning Spanish now,” she explained. “We wanted our daughter to see how useful her Spanish can be, and it’s been great.”

Then there is the chocolate. Oaxaca is famous for its chocolate so we stop in at a chocolate factory and watch people order their favorites (cinnamon, almonds, vanilla). Workers mix the chocolate right in front of us, handing it to customers as a big yummy blob in a plastic bag. My chocoholic daughters are entranced. The place smells heavenly!

We stroll back to the hotel, stopping at a shop here, an outdoor crafts market there. I want to buy everything — colorfully embroidered shirts and dresses, scarves of every hue, beads and painted animals — but restrain myself, because I know we are soon going to visit artisans in their workshops.

Talk about loving your work. Dona Sophia Reyes, 88, is a potter who works seven days and she hasn’t had a day off since she was eight. Dona Sophia welcomed us into her studio and home in San Bartelo Coyotepec, a village about 25 minutes from Oaxaca City.

Nicholas Garcia, our Austin-Lehman guide, who was raised in Oaxaca, explains that the distinctive black pottery that Dona Sophia makes dates back to 500 BC. We watch as tiny Dona Sophia pounds the clay and then forms it into a vase — no potter’s wheel. She jokes that when she was a child, her mother and grandmother would slap her wrists if she did something wrong. Her daughter and grandchildren now work with her.

A short drive away, in the town of San Martin Tilcajete, Jacobo Angeles Ojeda supports 10 families — seven carvers and 40 painters all part of his extended family — at his well-known workshop where they create the brightly painted animal wood carvings — bulls, owls, roosters, rabbits, dogs and cats — for which this region is known. Some of the carvings are huge, others can fit in the palm of your hand. A group, which includes the artist’s 13-year-old son, sits around large tables painting animals of varying sizes, and as they work they joke and laugh. “It is very special because we all get to work together,” explains the 36-year-old Jacobo, whose work is exhibited around the world. The artist’s 4-year-old daughter, Maria Sabina, plays with friends close by. Too bad all jobs aren’t this much fun!

The wood for these carvings comes from the Copal tree. Thousands of new trees are planted every year with great ceremony, Jacobo tells us. The artist and his wife, Maria, serve us lunch that is prepared in the traditional style by a relative who owns a nearby restaurant. We start with “memelas, small, thick tortillas covered with fresh cheese, soup, and Azucena Zapoteca, a squash blossom filled with cheese. Dessert is the best part. We watch as Maria grinds local chocolate in an old-fashioned mortar, adding nuts, cinnamon and sugar. Women mix the chocolate paste with a little butter, sweet wine and water to make the best chocolate sauce we’ve ever had; they then drizzle the sauce over ice cream. No one can resist seconds.

We couldn’t have arranged for experiences like this on our own. We needed a company like Austin-Lehman to lead the way, though such adventures don’t come cheap. (Check www.austinlehman.com for prices).

We hugged Jacobo and Maria goodbye.