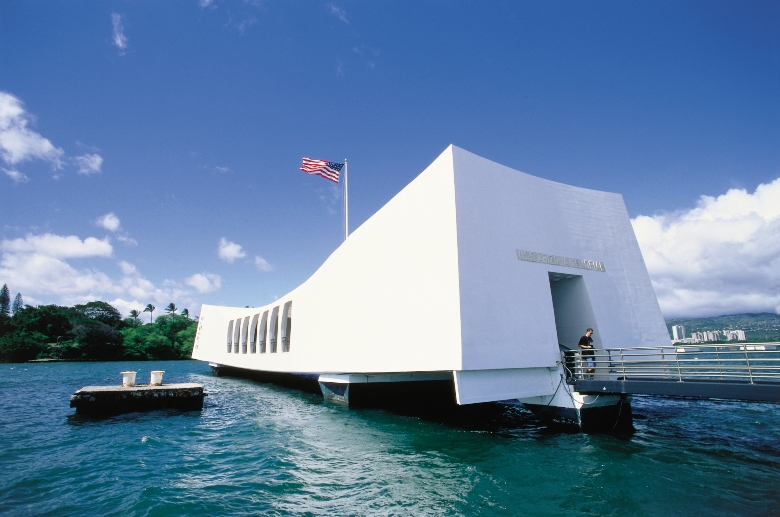 That might seem like a strange question to ask children visiting Pearl Harbor and the USS Arizona Memorial, the final resting place for the majority of the ship’s 1,177 crewman who died on Dec. 7, 1941.

But this month as we commemorate the 70th anniversary of the attack, the question is one of many in the updated and first-rate Junior Ranger Program for the World War II Valor in the Pacific National Monument that helps children make meaningful connections during a visit here.

Many families coming to Hawaii skip Oahu entirely. They shouldn’t. Maybe now with Disney’s new Aulani Resort more families will be encouraged to linger here (read about my visit to Aulani). There is much to see and do on Oahu beyond Waikiki (read my column), starting of course, with a visit to Pearl Harbor, which is about a 45-minute drive west of Waikiki. More than 2,400 people, military personnel and civilian, died on that fateful day, another 1,178 were wounded in the horrific surprise attack and ensuing battle, which lasted less than two hours.

Kids who have grown up post-9/11 can relate to a sneak attack that wreaked such havoc and changed their world. Opt for the new self-guided audio tour narrated by actress Jamie Lee Curtis, which features the voices of many Pearl Harbor survivors (rentals are $7.50).

For those who can’t visit, Pacific Historic Parks has a Witness to History program, a free distance-learning session using video conferencing. You can also order books for children from the online bookstore or download the Remembering the Pacific podcast.) Consider a trip to New Orleans and the National World War II Museum, which has a special exhibit “Infamy: December 1941” that focuses on the Japanese surprise attack on Pearl Harbor. Much of the story is told by the oral histories of the men that were there. (Check the website to see how you can bring part of the exhibit to your school or community

I first visited Pearl Harbor more than a decade ago with two of my kids and my mom, who recounted for them, as we toured the USS Arizona Memorial, my dad’s World War II experience in the Pacific — and her years of waiting for him at home — as well as the friends they lost. When I returned recently by myself, a year after my mom’s death and long after my dad passed away, I was glad to see that the new visitor center offers the opportunity for the next generation to see so many first-hand accounts and artifacts. Tremendous effort has been made here — from the exhibits to the films to the Junior Ranger book — to help parents make a visit here a true teachable moment.

The World War II Valor in the Pacific National Monument actually encompasses nine historic sites representing various aspects of the war in the Pacific. Besides the visitor center and the USS Arizona Memorial, you can also visit the USS Utah Memorial and the USS Oklahoma Memorial on Ford Island, dedicated in December 2007 to the 429 men who died there — those deaths second only to the number of deaths aboard the USS Arizona. If you have time on Ford Island, visit the Battleship Missouri Memorial Museum, the site of Japan’s unconditional surrender to the Allied Forces on Sept. 2, 1945, and the Pacific Aviation Museum.

Adults will be surprised by how much they learn when they take the kids’ perspective. Take the question about trash or treasure. The U.S. National Park Rangers today scuba dive on the USS Arizona to care for the memorial, protecting historical artifacts — treasures — that were on board during the attack — an old clock, a compass, an officer’s hat — and trash like disposable cameras, plastic leis or sunglasses that shouldn’t be here.

With their Junior Ranger book (download it from the website, or get one when you arrive), kids can identify who’s who in World War II by matching the major Axis and Allied flags, complete a crossword with words like “Sailor,” “Service” and “Heroes” and even do a little math, calculating how many man hours it would take to rebuild the battleship fleet.

The year-old Pearl Harbor Visitor Center — dedicated Dec. 7, 2010 — is a good place to start your visit. Kids will get a good grasp of what it might have been like to grow up in Hawaii then, long before Hawaii was the tourist mecca it is today, or to be serving in the Navy as a young sailor. Interviews with military and civilian survivors make the story come alive from the perspective of those who lived through these extraordinary times — everyone from military survivors, civilians to Japanese aviators.

Stand beneath a 1/3-scale model of a Japanese Type 97 B5N2 Nakajima Torpedo Bomber, known later as a “Kate.” The plane is posed as though it is just seconds away from dropping its torpedo into Pearl Harbor. Though the use of photographs, film and oral histories, you’ll learn how difficult it was to track incoming aircraft back in 1941.

The final exhibit is the detailed scale model of the USS Arizona as she is today lying at the bottom of the harbor. You can see underwater footage of the Arizona today on a large TV screen before you go out on the USS Arizona Memorial tour (when you arrive, you get a numbered ticket that provides free admission, including a documentary film on the attack and the short boat trip aboard a Navy shuttle there). The memorial is the only place in the world a person can stand above a sunken battleship to honor those entombed below.

Stand in front of the huge plaque in the Shrine Room with the names of the sailors and Marines who perished here on Dec. 7, as well as USS Arizona survivors (only 335) some of whom, upon their deaths, have opted to have their ashes scattered at sea with their comrades.

There’s an important lesson to be learned here, the Junior Ranger book suggests, about why we have monuments.

Tell your kids as they stand quietly, and they will, that such symbols are places we can visit to remember the people and the events that changed history.

I promise you; they won’t forget.