To San Francisco’s California Academy of Sciences, the Greenest Museum in the Country 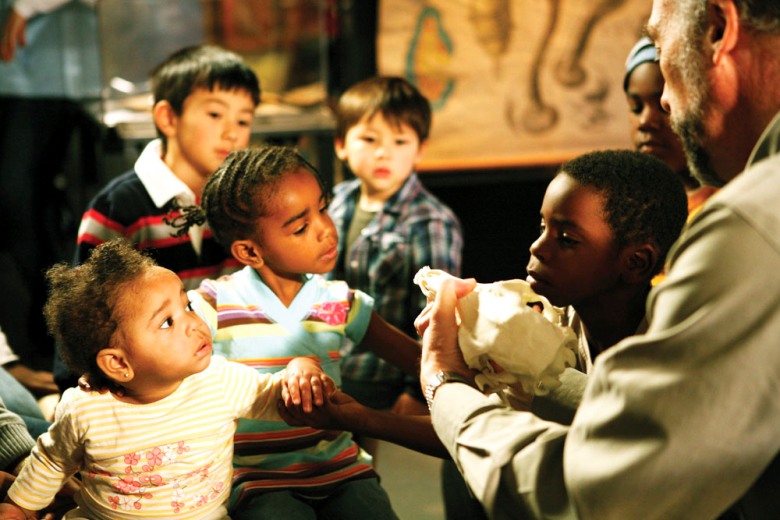 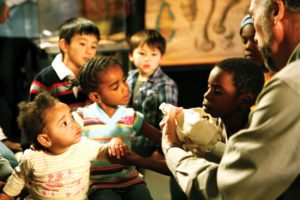 Kids get up-close and personal with specimens at the Academy of Sciences.

We’re at the California Academy of Sciences (www.calacademy.org) in San Francisco’s Golden Gate Park, which in the year since it has re-opened has emerged as the city’s top cultural tourist attraction, drawing more visitors than Alcatraz to the country’s “greenest” museum.

It’s a combination aquarium, planetarium, natural history museum and scientific research facility all under one living, 2.5-acre roof housing 1.7 million native plants. There’s a Naturalist Center with experts on hand to help your kids decipher their latest “discoveries” and an Early Explorers’ Cove for preschoolers with puppets, puzzles and “Nature for Your Noodle” boxes that enable families to learn together about California animals. This month, kids are invited to take part in a scavenger hunt, promising a prize if they are brave enough to find at least six “creepy, crawly critters” inside the 410,000-square-foot building, which is powered in part by solar panels, insulated with recycled blue jeans and supported by recycled steel, setting a new standard for sustainable architecture.

“It’s great that all of the museums are together under one roof. It really works and the kids are entertained,” said Lisa Hungate who brought her three kids and a cousin from Carmel, Calif., for the first time.

“Really cool,” reported Zander Vdovkin, 12, as he watched the fish swimming above him.

It’s also cool how the Cal Academy, as locals call it, and the de Young Museum next door (www.famsf.org/deyoung), re-opened in 2005 and now offering the blockbuster King Tut Exhibit “Tutankhamun and the Golden Age of the Pharaohs,” which runs through next March, have made the city’s famous Golden Gate Park (www.onlyinsanfrancisco.com) a new must-see destination. (Check out the Koret Children’s Quarter, which was the country’s first public playground when it opened in 1887. It re-opened two summers ago after a $3.8 million renovation. Kids love the historic carousel and the slide.)

We felt like we were time traveling in Golden Gate Park from the days of the pharaohs 3,000 years ago to the Cal Academy’s 21st-century exhibits. We got a dose of history too of San Francisco’s post-earthquake grand days at the Fairmont San Francisco (www.fairmont.com). (Check out the gilded ceiling and the Tonga Room with its “floating” band shell. The hotel opened exactly a year after the 1906 earthquake.) The 20-somethings in our crew loved the city’s hip eateries like Starbelly (www.starbellysf.com) with its home-cured meat, organic brews and foreign cinema (www.foreigncinema.com) with movies played on the patio wall.

San Francisco is one city where there’s plenty to excite everyone—especially in Golden Gate Park with more than 1,000 acres and not a single “Keep of the Grass” sign. Treat the kids to fortune cookies at the place where they were first created—the Japanese Tea Garden at the San Francisco Botanical Garden, or let them turn cartwheels in the grass when they’ve had enough museums.

The kids at Cal Academy don’t seem in any hurry to leave, though. In fact, museum officials say, visitors are staying a lot longer than is typical at science museums. “Over four hours,” says Academy spokesman Stephanie Stone. If your kids think museums are boring, you need to bring them here.

So who is the flapping creature of the night that lives in a cave in the Borneo Rainforest? A bat. (And here’s a little Halloween trivia from the Academy’s scientists: Of more than 1,000 different kinds of bats only three drink blood and none of those live in North America.)

Everywhere you look there are areas to engage kids and the adults with them—from the Albino alligator in The Swamp to the 80-foot skeleton of the blue whale hanging overhead. Discuss what you and the kids can do at home to help mitigate the impact of climate change and then step inside a living rainforest complete with croaking frogs, chirping birds and hundreds of butterflies. Follow a boardwalk through a mangrove lagoon where sharks, rays and sea turtles swim beneath you. Fly into space at the world’s largest all-digital planetarium where there is a new space show narrated by Whoopi Goldberg.

“It’s very easy to navigate,” observes Deidre Araujo, visiting for the first time with her daughter.

“I like that all the animals are real,” adds Gisele Araujo.

Next door at the King Tut exhibit, of course, kids are trying to get their heads around the idea that everything here—tiny board games, King Tut’s golden dagger, cosmetic jars—is more than 3,000 years old. They also can’t seem to grasp what it would be like to be a king when you are in fourth grade. “Too much pressure,” said 12-year-old Robert Eppley, visiting with his friends from suburban San Francisco.

Back in the 21st century, visitors sit cross-legged on the floor watching the swimming penguins in the African Hall. The 38,000 animals of the Steinhart Aquarium are found throughout the building as are Academy scientists and volunteers providing hands-on learning opportunities—story time for young kids on Thursdays and Saturdays, Family Crafts on Sundays, special Science Up-close demonstrations on Wednesdays.

Before we leave, we head to The Living Roof—2.5 acres of native California plants, which not only provide insulation but prevents storm water runoff, keeps the building cool and creates a habitat for native birds, butterflies and bugs. Impressive! Look closely, you’ll see that the roof’s seven hills mimic the hilly topography of San Francisco.

Who says science is boring?