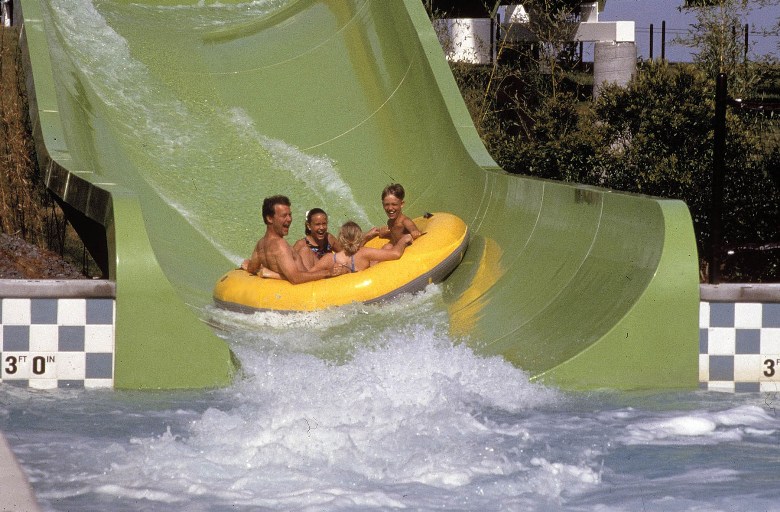 Down Under Thunder attraction at Carowind's Boomerang Bay.

For once, we’re glad it’s not a perfect blue-sky vacation day.

Otherwise, Aquatica (www.aquaticabyseaworld.com) — SeaWorld’s new Orlando water park, designed to feel like a South Sea island with lush landscaping (60,000 plants and flowers!) and white sand (3.1 million pounds of it!) would have been so packed that by 11 a.m., the park would have had to turn families away.

“This is our third try to get in,” said Laura Goguen, a suburban Boston mom who stopped with her husband and two daughters to sample the water slides (ready for an eight-lane racing slide? Maybe a 129-foot flume ride?) before they flew home. “There was a nice collection of things for the girls to do,” she said.

That’s an understatement. There are 36 water slides, six rivers and lagoons, white sandy beaches and two terrific kids’ water play areas. Let’s not forget the animals — Commerson’s Dolphins (take the “Dolphin Plunge” down 250 feet of clear tubes, through their habitat), Macaws, and colorful African Cichlids, which, for the uninitiated, are colorful fish found in freshwater lakes and rivers in Africa, Central and South America, among other far-flung places.)

Kids, of course, were most interested in the rides, while parents were delighted to catch a break. “My kids are little fishes and they’re loving it here,” said Philadelphian Nancy Ryan, who was actually relaxing while her two kids were off testing their mettle on the water slides. “Everything is rush, rush, rush at home,” she said. “I want to enjoy vacation!”

Certainly my 5-year-old cousin Ethan Sitzman and his dad, Mike, were enjoying themselves. Hannah Sitzman, 3, had an earache (the doctor said no swimming that day) so we left her and her mom, Jayme, across the street at SeaWorld Orlando while we checked out Aquatica. (Visit www.seaworldorlando.com for the skinny on different combo tickets, as well as VIP tours. Military families may get free admission.)

Aquatica is generating considerable buzz. It is the first new park in Orlando since 2000 when SeaWorld opened Discovery Cove, the place where just 1,000 people a day get exclusive up-close encounters with sea creatures. Ready to swim with the dolphins or pet the rays?

There are plenty of animals at Aquatica, too. Check out the 80-pound giant anteaters, the laughing kookaburras or the tortoises that weigh as much as 200 pounds, but good luck getting the kids out of the water to check them out.

My cousin Ethan, too little for the Dolphin Plunge, loved Loggerhead Lane, the lazy river that floats guests past a view of the dolphins, exotic birds and a huge habitat of exotic fish. Other younger kids I met were spending their day at Walkabout Waters, one of the world’s biggest interactive water playgrounds with 15,000 square feet of slides, water cannons and more. Kata’s Kookaburra Cove, meanwhile, features special rafts designed for parents and small children to ride together.

The key to water park happiness — and safety — of course, is to keep your eyes on your younger kids and know the older ones’ whereabouts. I was impressed at Aquatica by the attentive parents and the lifeguards everywhere. And since your tweens and teens aren’t riding water slides with cell phones in their pockets, make sure you’ve established meeting places and times so that no one gets lost. You’ve also got to be vigilant about re-applying sunscreen, no matter how much the kids complain. Tell them they’ll complain a lot more about painful sunburn.

Make sure the youngest park-goers don’t swallow the water and are wearing special water diapers that won’t leak. The International Association of Amusement Parks and Attractions reports that water park managers have been especially vigilant to prevent water-borne illness and test the water several times a day. (Visit www.cdc.gov/healthyswimming for more water park safety tip.)

Aquatica may be the biggest but it’s not the only new water playground on the block. Check out KeyLime Cove (www.keylimecove.com) in Gurnee, Ill., Carowinds (www.carowinds.com) in Charlotte, N.C., with Bondi Beach — a huge 600,000-gallon wave pool that’s part of a big expansion of the Boomerang Bay water park there, or Holiday World (www.holidayworld.com) and Splashin’ Safari in Santa Claus, Ind., with its $6 million dollar, seven water slide monkey-themed expansion.

I admit I find water parks — especially with young kids — stressful. And lines for popular water slides can be brutal. But well-designed water play areas, like the ones at Aquatica, complete with gentle slides, climbing nets, water cannons and giant water buckets that dump water on little guests, make it a lot easier for parents.

“It’s much less stressful than the theme parks,” says Jennifer McCollum of Jacksonville, Fla. She and another mom came to check out the park with their kids.

The two added that they thought the extra fee (starting at $150) for the shady cabanas, complete with ceiling fan, a mini-fridge stocked with soft drinks, comfy lounges, towels, and ” room service” was well worth the tab to lower the stress quotient even more. “Our stuff is safe and secure and there’s a nice wait staff. They even swept up after us,” said Shannon Perry.

The one disappointment: The food at the all-you-can-eat Banana Beach Cook-Out wasn’t up to par, diners said.

Still, parents seemed to enjoy themselves — snoozing on the beach chairs, flying down the water slides with the kids.

“Orlando can be fun but exhausting,” said Susan Frontain of Virginia. “This is a nice change of pace.”

As long as you get there early!