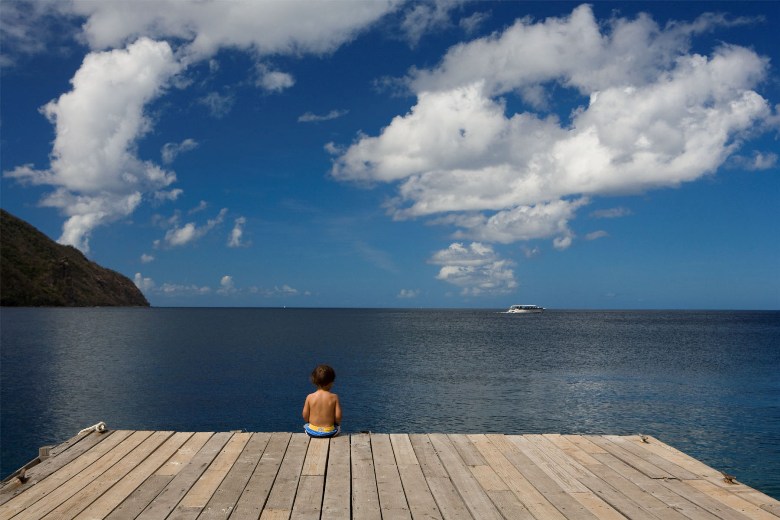 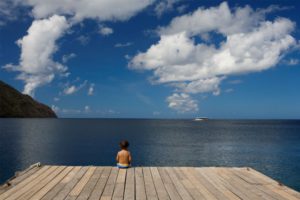 All that and spectacular beaches, too, on the Caribbean island of St. Lucia (www.stlucia.org ), which promises a lot more than your typical resort getaway. (Did I mention Pigeon Island National Park with its old barracks and caves that were said to be used by pirates?) With a culture that has borrowed from both the British and French — the small island midway between Martinique and St. Vincent changed hands some 14 times before finally gaining independence in 1979. Less than 200,000 people live on this little bit of paradise — only about 27 miles long and less than 15 miles wide.

“St. Lucia is a lot different than other Caribbean islands because it is so green and so natural,” says Rene Isaac, a native St. Lucian and US Airways pilot, and my seatmate on the nonstop (just four hours) Jet Blue flight from New York. Now that Jet Blue (www.jetblue.com ) flies here from New York — and also offers vacation packages — there are more options for families looking for a different kind of Caribbean experience (jungle biking, Zipline or a raucous Friday night fish fry), and everyone speaks English and takes U.S. currency.

I’m here for a weekend girls’ getaway with two of my oldest friends. We’re staying at a new Rock Resort The Landings (www.thelandingsstlucia.com ), ideal for girls, couples or families (complimentary kids’ club, pool table for teens) because it is all spacious condo-like units (ours has a balcony hot tub) with full kitchens, multi-baths and bedrooms. All on 19 beachfront acres on Rodney Bay near the northern tip of the island, even offering its own marina. (Stay at The Landings St. Lucia this winter and get a free night, $50 gift card and free Adventure Eye Video Systems helmet camcorder. When you get home, enter your video on RockResorts.com’s Three for Free contest page, where the winning video will win two FREE Epic Passes, allowing unlimited skiing at Vail, Beaver Creek, Breckenridge, Keystone and Heavenly, for the 2010/2011 ski season. You’ll need to book by the end of January 2010.)

I like that other resorts here also are similarly designed. (Without the kids, there’s also your pick of three Sandals all-inclusive hotels, www.sandals.com or small inns, www.inntimatestlucia.org ). We visit the deluxe Cap Maison St Lucia (www.capmaison.com ) nearby, which is just 49 rooms and villa suites and gets raves for its restaurant Cliff at Cap, Moorish-inspired architecture and villas that have their own rooftop pools. (Stay five nights for the price of four and get a $500 food and beverage credit!) I love the rock where you can sit at a table, waves crashing all around, and enjoy drinks sent down by bucket from the bar above. I’m told it’s a popular spot for proposals.

My gang, meanwhile, would give a thumb’s up to the Jalousie Plantation (www.jalousieplantation.com) on the southern part of the island (complimentary kids’ club and water sports, including a dive each day and substantial food credits this winter that will save you big bucks on food.) Spread out over 192 acres on what was once a working sugar plantation, Jalousie Plantation is located just outside the town of Soufriere. I loved the plantation atmosphere — the huge verandah where dinner is served and the 21st-century amenities (a massage in a tree house in the rainforest? Dinner cooked for you on your private deck?) (Book a luxury villa and you get a butler to cater to your every whim.

The best part: Jalousie Plantation is just 40 minutes from the airport and smack in between the island’s famous Pitons, a UNESCO World Heritage site. They look like giant snow cones actually jutting out of the ocean, but the two peaks — yes you can climb the 2,600-plus Gros Piton — are actually lava domes — part of what makes this island different; they were formed from a volcano.

Earlier, we’d toured the “Caribbean’s only drive-in volcano,” which our guide Ruthy Victorian tells us is 1,000 feet above sea level. It smells like rotten eggs — all the sulfur in the air (the nearby town of Soufriere roughly translates to sulfur in the air.)

There are about two-dozen bubbling pools (temperatures more than 300 degrees!), a mixture of rainwater, heat, and seawater, with the heat coming from the magma a mile down. (The colors of the rock are amazing, everything from black to brown to yellow — all the colors of the minerals from iron to sulfur to calcium oxide and more.)

Eighty people still live on the volcano’s edge, Victorian tells us. These residents farm the rich volcanic soil and the natural hot springs draw locals and tourists for their redemptive qualities. The water is supposed to cure everything from aching joints to bug bites to sunburn.

It seems French soldiers recognized the medicinal properties of the water as far back as 1713 and built baths a short distance away at what is now Diamond Botanical Gardens and Mineral Baths. We gawk at the mineral waterfall spewing multicolored water. All varieties of plants, flowers and vegetables grow here — everything from avocado to soursop, nutmeg, and philodendron that grows 20 feet tall.

After our tour of the gardens, our group adjourned to a small inn called Villa des Pitons (http://villadespitons.com/ ), found up a steep hill and an even steeper flight of stairs. Here we were treated to a gorgeous view of the pitons and the pastel-painted Caribbean houses spilling down the hillside to the coast. As fishing and sailboats bobbed in the water, we feasted on local foods — breadfruit (very bland), plantains (similar to yams), barbecued chicken, lamb, Creole tuna and Dasheen, a kind of squash (not much flavor at all).

On the sail back to the north part of the island (www.carnivalsailing.com), we stop at Anse Cochon, which roughly translated means Bay of Pigs. Centuries ago this area was known for swimming wild pigs. Today, there are none, just colorful fish, as it is a marine sanctuary where locals try their hardest to convince us to buy souvenirs.

In St. Lucia the sun shines, the sand is white and the clear, calm Caribbean water is ideal for snorkeling. More important, I’m with two of my closest friends and for once not responsible for anyone else but myself. Next trip, I vow as I sip my drink, I’m going to bring my adventure-loving gang and we’ll climb to the top of Gros Piton.