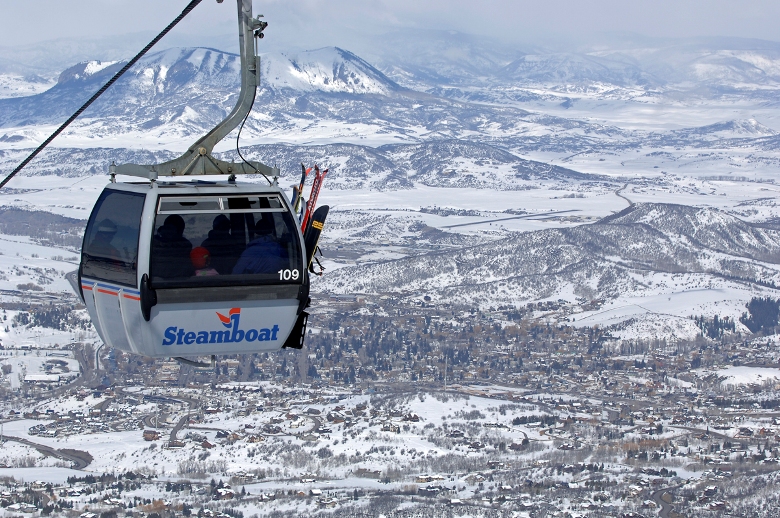 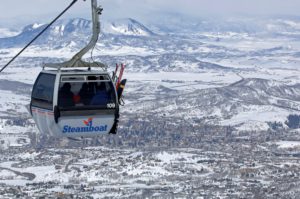 AAAH. Snow-covered mountains and tall evergreens surround me as I soak in Steamboat, Colorado’s famous Strawberry Park Hot Springs (www.strawberryhotsprings.com), its bubbling pool a toasty 105 degrees, while some hardy souls climb out of the pool, roll in the snow and then jump back in.

The story goes that in the early 1800s a French trapper heard a noisy hot spring that reminded him of a steamboat. When the railroad was built in 1908, the formations around the spring were changed and the chugging sound was lost. Still, the name stuck. There is also an Old Town Hot Springs (www.oldtownhotsprings.com) — first dug 132 years ago by town founder James Crawford — that boasts a fitness center, pools, waterslides and a custom designed hot pool with climbing wall and two spa pools. But we prefer our wilderness hot tubs carved out of rock. (We came with Sweet Pea Tours, www.sweetpeatours.com, so we didn’t have to drive the challenging road.)

Liam Burns, 18 months old, is certainly a happy camper, as is his 4-year-old brother, James, as they splash in the pool with their parents, grandparents, aunt and uncle. “It’s like a giant bathtub,” said their dad Martin, “and they certainly love their baths.” (After dark, the springs become “bathing suit optional” so kids aren’t permitted.) The family had gathered from the East Coast for a ski trip and it earned high marks.

It’s our annual family reunion on snow, too — 11 of us this trip all between the ages of five and sixtysomething — and we’ve gathered in Steamboat, Colo., known for having more U.S. Olympians — 79, including 17 from the 2010 Vancouver Olympic Games — than any other American town. And just as important to thousands of families, Steamboat offers pioneering kids-ski-free programs (www.steamboat.com  dating back 26 years.

While other resorts have adapted various aspects, Steamboat has morphed to include kids rent-gear-free and even fly-free deals (one free child per adult) and has put the town on the map as family central, which could add up to savings of hundreds of dollars a child for a five-day trip. Teens up to 18 get a break on lift tickets, too, as do skiing grandparents. No wonder families remain at the core of the resort’s business.

We chose Steamboat because the resort is known for its champagne powder — more than 400 inches of snow a year — its new Kids Vacation Center (now doubled in size) for five and seven year olds, plenty of terrain for such a varied group of snowboarders (lower intermediate) and skiers (expert), as well as non-skiers (they plan to snowshoe). Parents will like that there are lifts just for the terrain parks — look for 30 new and refurbished features, designed for different levels, on the four progressive parks so tweens and teens can “lap” the parks easily and safely.

Another plus: This may be one of the largest mountains in North America (2,965 acres) but there’s plenty else to do here besides ski and snowboard. (We spent a couple days in the back country at a nearby ranch, www.vistaverde.com; more about this experience in an upcoming column.)

One morning, we signed on for a snowshoe tour and found ourselves in five feet of snow, slipping and sliding through the Aspen trees, laughing as we picked ourselves up. Our tour guide, Paul Longsdorf told us he was originally from Pennsylvania and discovered the spectacular vistas first as a pilot. It’s easy to see why he opted to move here. Everyone is so easygoing and friendly.

Of course, families here are paying plenty for the privilege — more than $130 a day for preschoolers; $120 for older kids for organized all-day lessons. But those who sign on believe their money has been well spent. ‘The kids do better without the parents. They take instruction so much better from someone else,” explains Jennifer Karnes. She’s here from the Southeast for her fourth trip with her husband and three sons, who range in age from 2 to 16. “If you try to teach them, she said, “they get angry and you get aggravated.” And that’s certainly no fun on vacation.

It seems that once families discover Steamboat — there are direct flights from nine major cities across the country — they return again and again. More than 60 percent of families are repeat customers. Instructors return, too — 60 percent have been here more than five years. “They get what families need,” says Amy Wolf, a flight attendant and Coloradan from Loveland who’s skiing with her husband and two sons. Wolf skis many of the state’s resorts and pronounces Steamboat her favorite.

“It is our culture that makes us different,” believes Nelson Wingard, who oversees one of the largest ski school programs in the country (480 on staff, 100 just for kids). On a busy week like this one, he says there might be 1,500 kids enrolled. “We don’t have a secret recipe. We care about kids. We treat these kids like they are our kids.” It shows.

The resort certainly does its best to make it easy for families — from a seamless drop-off right at the ski school to special GPS units that allow supervisors to track children on the mountain. (If a child strays too far from his or her instructor, supervisors are sent an alert and can immediately notify the instructor.) Kids love that they can also go online at the end of the day, plug in their number and see exactly where they skied — bragging rights for how much vertical they covered.

Still, whatever the benefits, many snow-loving families decide ski school is just too pricey. Jillian and Craig Moriarty, from Minneapolis, are teaching Hayden, 3, while their 11-month-old is ensconced in a backpack on his dad’s back. “It is a real workout — a whole other level of fitness,” laughs Jillian Moriarty. “This is about being with your kids,” she explains.

“These memories will keep me warm when I’m 90 and they will keep the kids on the right track,” adds Amy Wolf. “This is something the family can do together,” she adds. “I can watch their Little League games but I can’t get out and swing the bat with them.”