To the historic ships in SF where Reggie works 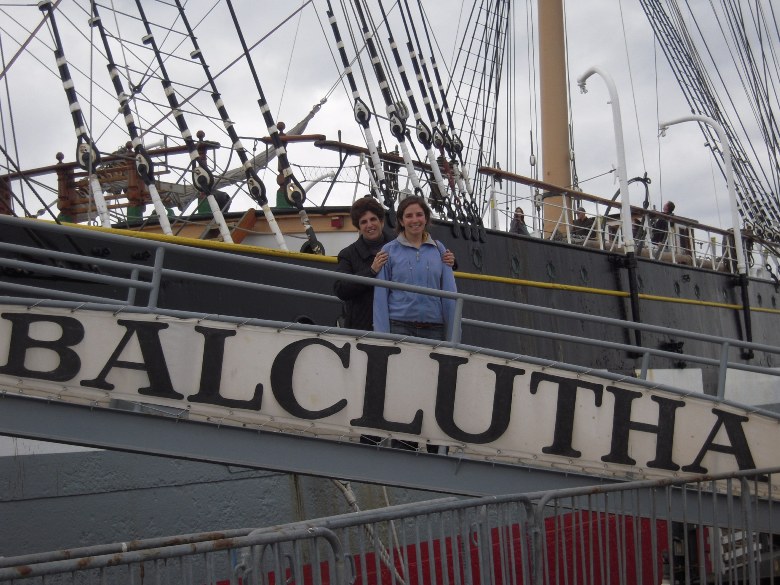 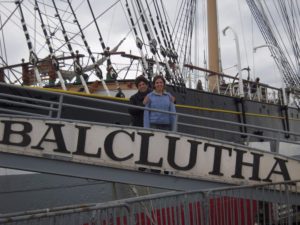 Eileen and Reggie on the Balclutha

Here’s the chance to give your kids a lesson — without them even realizing it — in San Francisco’s seafaring past and the people who made their lives sailing in and out of San Francisco Bay, hauling lumber, canned fruit and more. Five vessels — the Alma, Balclutha, Eureka, Hercules and C.A. Thayer are designated National Historic Landmarks.

Watch a brief video of the historic ships HERE We were especially interested to visit here because my daughter Reggie, now leads Age of Sail school trips aboard the 19th century Balclutha, a square rigger that was built in Scotland to haul California wheat to Europe and rounded Cape Horn 17 times. Kids will love trying out a cramped bunk and peering into the captain’s quarters — one captain’s daughter was born and learned to walk aboard!

Park staff and volunteers lead a variety of programs designed to allow you and the kids to time travel back to an era when huge sailing vessels crowded San Francisco Bay. During the Gold Rush, in 1849 well over 750 ships rushed here and so many boats were abandoned that they were used as landfill for the financial district, in fact. We checked out the coast al schooner C.A. Thayer where lumber was piled high that eventually built California’s cities in the early 20th Century. The Thayer is representative of hundreds that sailed the Pacific Coast.

We walked amid the old cars on the Eureka which was built to ferry trains across the bay but started to ferry passengers and cars in 1922 before the bridges were built. In those days, you could get a bowl of soup for 20 cents on the 32-minute journey.

If you come during the right time, you might be able to go out on a Sail on the Alma, the last San Franciso Bay scow schooner still afloat. Flat bottomed boats like this carried everything from grain , hay and fertilizer between delta farms and San Francisco.

We barked at the sea lions lolling on the piers and enjoyed the view of the Golden Gate Bridge and Alcatraz. We resisted the temptation to stop across the street at Ghiradelli Square for a sundae and instead walked San Francisco’s hills back to our hotel, the iconic Fairmont San Francisco on Nob Hill that seems to be the center of a lot of action here today just as it was when it opened a year after the San Francisco earthquake.

We ended the day at Foreign Cinema — a cool restaurant in the Mission District where they show movies and the menus change often based on local ingredients. Great kids menu too including organic vegetables with dipping sauce. We loved the smoked salmon with autumn vegetables; fresh goat cheese baked on fig leaf and roasted chicken with hummus and an autumn risotto with pumpkin and zucchini. I liked that the menu was not too pricey (most main courses were in the 20s) and the stand out desets (chocolate pudding cake! Spiced apple turnovers with caramel sauce!

At least we’d hiked up all those hills we told each other as we scooped up another bite.