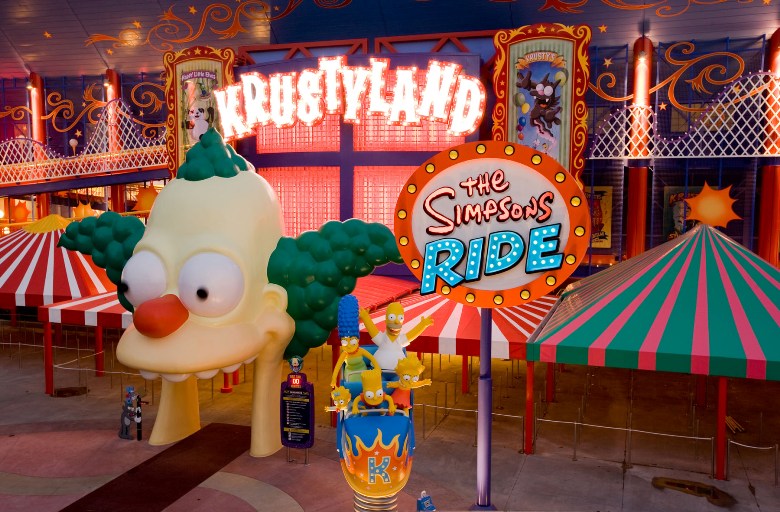 Welcome to Krustyland! Where we join the Simpsons — yes those Springfield Simpsons of TV and movie fame — in Krusty the Clown’s crazy cartoon world, a theme park within a theme park. Talk about make-believe — and incredible technology – as we’re swept along, flying, bumping and crashing through the attractions, just opened at Universal Studios Hollywood and Universal Orlando.

Favorite Simpsons characters — remember Groundskeeper Willie — man the animated carnival booths. Krustyland is a satire of pricey theme parks and a wild, kid-friendly attraction brought to life by original Simpsons actors — who lend their voices to their characters. According to Universal officials, it’s also a “green” attraction, with 2,582 LED lamps, the largest installation in theme park history. Here’s the backstory: Sideshow Bob (who is crazy) has escaped from prison and taken control of Krustyland to gain revenge on Krusty and the Simpsons. (Check out the 32-foot-tall Krusty the Clown.)

We race through Krustyland — and Springfield — on the world’s first-ever animated coaster. It is way cool, though in reality it’s a motion simulator – albeit one that tilts and twists in sync with the action projected on the 80-foot dome. (Check out www.simpsonsride.com. And if you are going to be checking out the new attraction at Universal Studios Hollywood, the Sheraton Universal has a Springfield Goes Hollywood package valid until the end of the year, ww.sheraton.com/universaloffers.)

Though Walt Disney World is bigger than Universal’s two side-by-side parks in Orlando -Universal Studios and Islands of Adventure, with its City Walk of restaurants (we had lunch at the Nascar Cafe surrounded by memorabilia), clubs and street performers – you can’t beat Universal’s “wow!” factor, whether you’re 5, like my cousin Ethan Sitzman, taller than 40 inches, he was thrilled he was big enough to visit Krustyland, or 3, like his little sister Hannah, she loved Seuss Landing, designed around Dr. Seuss’ creations, or the grown-up coaster aficionados in the gang, like their dad Mike. We were also able to visit both parks in one day. (Check www.universalorlando.com for packages that give you two free two-park tickets, if you stay four nights at one of the onsite hotels. You also get front-of-the-line access when staying at the resort.)

“It’s so easy to get around,” said Tara Goldizen of Montgomery, N.Y., who toured the parks with four children under the age of 6. “The kids like it better than Disney and my husband loves the roller coasters.”

The Universal parks are, of course, known for their stellar coasters — Dueling Dragons, the first duel coaster in the world built so that its two coasters speed toward each other on separate tracks, The Incredible Hulk Coaster, which catapults riders up a 150-foot tunnel at G-Force speed and then turns them upside down more than 110 feet above ground, as well as technology-driven attractions like the new Simpsons Ride and Revenge of the Mummy-the Ride and The (3-D) Amazing Adventures of Spider-Man.

But there are a surprising number of play areas and activities for young children too, including Toon Lagoon with Dudley Do-Right’s Ripsaw Falls flume ride (suitable for kindergartners) and Me Ship the Olive, an interactive play area where 3-year-old Hannah was able to aim water cannons at her brother riding on Ripsaw Falls. There’s also Camp Jurassic (a “prehistoric” playground), the kid-sized coaster The Flying Unicorn, Jimmy Neutron’s Nicktoon Blast (want to help save the planet?) Woodpecker’s KidZone, complete with thousands of foam balls, water play, gadgets and more. Everyone loved the fanciful Seuss Landing in Islands of Adventure with the interactive If I Ran The Zoo play area. You can also ride a “couch” right through The Cat in the Hat story or on colorful Seussian creatures on the Caro-Seuss-el merry-go-round. Green eggs and ham anyone?

The kids were also thrilled at the chance to get up close and personal with SpongeBob, Shrek, Princess Fiona and Donkey, Curious George and Scooby Do. (Shrek 4-D was a hit too.)

“I really think this park is kid-friendly for younger kids,” said Chrissy Summers, visiting from Maryland with a 2-year-old and 4-year-old.

Just wait until Harry Potter “Theme Park within a Theme Park” debuts the end of next year. Another plus: Universal also offers a lot of deals and perks, including a ticket to visit both parks for just a few dollars more. (Book Early-bird Exclusives and get up to seven days unlimited admission to both parks for $85 – less than a one-day Disney World park-hopper ticket. For more discounts and deals, www.visitorlando.com.)

We opted for VIP treatment, signing on for a VIP tour that not only allowed us front-of-the-line access but also got us discounts, free parking, behind-the-scenes sneak peeks and, when possible, a look at onsite movie-making. Did I mention that Universal Studios is a working film and TV production studio? (Prices for VIP tours start at $100 a day per person and go up to $2,600 for an exclusive two-day, two park tour http://www.universalorlando.com/tic_vip.html.)

The best part — besides cutting the lines — was our knowledgeable and upbeat guide, Karyn Shelton, a doctoral candidate in music, who could not only answer every question we threw at her, but planned our day to keep all of us happy. In fact, I was impressed with how little the kids whined and how long they lasted (from 10 a.m. to 6 p.m.!).

A TIP FOR PARENTS: Shelton polled 5-year-old Ethan and 3-year-old Hannah, as well as the adults, about what we wanted to do first and steered us away from rides she thought would be too scary, even if the kids were tall enough to ride them. “Relax,” she told us grown-ups.

And amazingly, we did, letting someone else – for once — lead the way, zipping us through one park in the morning, the other in the afternoon.

At the end of the day, the kids said they liked “everything best.” For us, not having to lead the way was the best part. I could get used to VIP treatment.